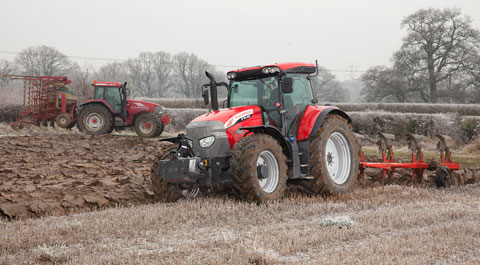 For once we weren’t sitting in the tractor cab into the early hours trying to work out how to set-up headland management and adjust transmission settings. We love the X70 because anyone can get on it and feel at home and that’s why 80% of these tractors will be sold in basic-spec form.

McCormick’s 150-200hp tractor range has a legacy that stems right back to the legendary Case MX of the mid-1990s. That’s a definite plus-point in plenty of operators’ eyes.

There can be few people working in farming who haven’t had some experience of the ubiquitous bulbous-nosed MXs, MTXs and, most recently, XTXs.

Known for their mechanical simplicity and straightforward lugging ability, these red red-bonneted tractors tend to find favour with people who have a liking for the simple things in life.

And that hasn’t changed with McCormick’s latest offering. Despite draconian emissions rules and the seemingly unstoppable wave of computer-controlled electronics that most tractors now suffer, the company’s new X70-series keeps things simple.

There’s been a lot of chitchat in the industry about the best way to control emissions nasties.

McCormick seems to have cracked it (from the driver’s perspective at least) with its combination of 6.7-litre Iveco FPT engine with AdBlue. The motor is left to run in its old-school ‘dirty’ state, with exhaust gases cleaned up after they head out up the stack.

The result is some bull-terrier-type determination from the Iveco even on heavy land and frosty stubble. We dragged the 214hp engine right down to 600rpm and it still managed to scrabble back up to speed once we’d dropped a cog. An 18hp boost is on tap for pto work, too.

For a big, new tractor the six-cylinder block is also surprisingly get-at-able. There’s no Rubik’s puzzle of pipes, filters and covers to get to the engine. Instead, the bonnet folds up against the front window and there are no flappy side panels to wrestle with.

The upshot of that is that, rather than staring at a wire-filled blackbox and scratching your head, you stand half-a-chance of troubleshooting any problems yourself. Service access is good, too.

Top marks, again, go to McCormick’s shuttle lever. Easy to move and unbeatably smooth, there’s little on the market to rival it. The only thing lacking is a park position. (Although if you order the top-spec E-plus version, park-lock comes along with powered range changes, auto-shifting, four electric spool-valves and armrest controls. Adding around £4000 to the price tag, E-plus models only account for 20% of sales – McCormick buyers clearly like to keep things simple).

The four ranges are controlled by a mechanical stick almost identical to the original Case MX’s. Stick shifts can be a stretch, though – you’ll find third gear somewhere over near the right-hand door handle and first and second both sit tight against the hand throttle.

Meanwhile, the eight powershift changes are controlled on a gearstick-mounted thumb toggle. It would be nice to have a powershift rocker switch added near the linkage controls to save hanging on to the gearstick all the time.

The gap between each powershift speed is 15% on the X70. That’s down from 22% on older models like our 02-plate MTX 175 and makes shifts noticeably smoother. It also means there’s less need to shunt from gear-to-gear in the field.

If it ain’t broke don’t fix it. So if you’re familiar with older generation McCormick and Case tractors you’ll probably recognise the interior controls. We love them.

Just like Dad’s music collection, the McCormick’s cab design has been modernised carefully and cautiously. Four pillars have replaced the original six post design and a roof hatch has lightened things up. The result? An airy feel and decent views all-round.

As for the dash, there’s no need to paw through a tiny computer screen to adjust oil flow or the finer details of the transmission. The digital dash displays the important stuff – pto speed, gear and link-arm height – without having to touch anything. Engine rpm is displayed on a big central dial.

Linkage position and draft settings are still managed with dials, while simple switches choose whether 4wd and diff lock are on, off or controlled automatically.

One minor emission is the option of engine rpm presets. There’s space for an extra switch on the side console and it would help cut down on noise and thirst during headland turns in the field. The radio, strangely, has moved to the rear corner roof lining so if you want to change station, you end up looking like a parakeet with a nasty neck injury.

Handy extras include a flip-over storage box lid which folds out over the passenger seat to form a table for your cheese and pickle sandwiches, while the cup holder on the other side makes an ideal phone holder.

Cab and front-axle suspension makes road travel silky smooth, even with a heavy load on the back.

The first thing you’ll notice in the field is that the linkage control rocker-switch is back-to-front. Up is down and down is up. This takes some getting used to and if we’d had the tractor longer we would have popped it out and flipped it round.

The rest of the controls are easy-to-use and well labeled. One downside is that one of the three standard spools is taken up by the telescopic hitch. So, if you want to avoid juggling pipes more than necessary, we’d recommend ordering the fourth valve for an extra £623.

We found the seat back too high as well – inconvenient when you spend half your time looking backwards.

As for the important stuff… The X70 pulled a Kuhn five-furrow like a husky on a lead, even on frozen heavy clay. Powershifts were smooth, if a little delayed, and there’s plenty of hydraulic power on tap.

For once we weren’t sitting in the tractor cab into the early hours trying to work out how to set-up headland management and adjust transmission settings.

If you’re that way inclined then there is a higher-spec version with a joystick and more complex controls, but why would you? We love the X70 because anyone can get on it and feel at home and that’s why 80% of these tractors will be sold in basic-spec form.

If you want all the bells and whistles then pick another brand because McCormick’s skill is in making simple tractors. That’s probably why they hold their money on the secondhand market.