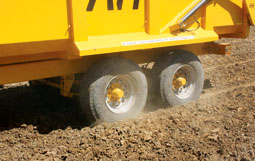 In the competitive world of agricultural trailer manufacture, cost has always been a big issue. Customers, it seems, have tended to think more about the hit on their their wallet than how the trailer will perform in the field or on the road.

And, with a mindset which traditionally sees a trailer as being little more than a big box on two wheels which needs a tractor to pull it, there is unlikely to be a requirement for any refinement.

But there’s a change in the air – a change which is now being imposed on trailer manufacturers by farmers and contractors who insist they now need trailers which can not only operate in fields without causing excessive compaction but also be towed at higher speeds on the road.

While the development of suspension and modern braking systems are playing their part in helping to drag trailer design into the 21st century, it is the availability of tyres developed specifically for trailer use which many will recognise as being the key factor.

When trailers had capacities of 8t or less, as long as the wheels were turning beneath it all was considered well. Tractor speeds were rarely more than 20kph and the distances travelled were short – compaction was not a consideration. Tyres, if anyone was duly concerned, were of a cross-ply construction.

As trailer capacities increased along with tractor speeds, the Super Single tyre – generally a remoulded lorry tyre – became the running gear of choice for trailer manufacturers. They were in plentiful supply and they were, above all else, cheap.

Based on a radial tyre with a steel casing, these tyres need to be inflated to a pressure of about 90psi to prevent excessive flexing which can cause metal fatigue in the casing. As a result, the footprint they create on the ground is small and the loading and compaction is high.

To be fair to Super Singles, their field carrying ability has been improved in recent years with the introduction of wider versions. Still on 22.5in rims, widths have increased from 15in to 16in and then to 18in.

But with the development of larger capacity trailers soil compaction damage became an issue and farmers started to look for alternative tyre options.

One solution was to turn to the radial tyres used by the military which not only offered a wide, weight spreading profile but also had a robust build which meant they resisted punctures and lasted a long time.

The only problem was their cost, once all the cut-price army surplus supplies had been purchased. New ones were just too expensive.

But then came the prospect of radial tyres designed specifically for trailer use. Tyre manufacturers had been working on developing radial tyres for tractors for a number of years and eventually reasoned that they may also be a good move for trailers.

For Michelin, this meant the introduction in the late 1980s of its X Agricole trailer radial agricultural tyre range. Considered at the time to be a major step forward and a big improvement on Super Singles, its inflation pressures and load carrying were, by modern standards, far from ideal.

For example, the 18R22.5 on its 14in rim was originally designed for a maximum speed of 30kph and for wheel loads of less than 3t. Today, speeds are up to 65kph and loadings can be more than 4t, something that would have needed an inflation pressure of 57psi to support a wheel loading of 4500kg while travelling at 40kph.

Reduced compaction meant soil damage was reduced, plant roots could perform better and yields could be increased. At a time when fuel prices were beginning to have some bearing on establishment costs, it meant that land which worked easier and did not require subsoiling was going to consume less fuel.

The demand was not lost on several tyre manufacturers which set about developing a suitable tyre. Flotation trailer tyres now available from companies like Nokian with its Country King, the Alliance Radial Flotation A390, Vredestein’s Flotation Trac, Bandenmarkt’s Kargo-Radial and Trelleborg’s Twin Radial.

Michelin’s contribution was the CargoXbib which was introduced in 2001. As with other manufacturers the aim was to develop a radial tyre which could be operated at low pressure, high speed and sustain the weight modern high capacity trailers exert.

With the ability of such tyres to spread the weight of a trailer over a wide running area – the radial design allows the tyre to spread and create a larger foot print – there is not only a reduction in soil damage but also a lower rolling resistance in the field.

We’ve all seen it, a wave of soil created immediately in front of a tyre which consistently impedes its progress. The smaller this wave of soil is, the less rolling resistance it causes and the less fuel is used by the towing tractor.

That’s how it works with a radial trailer tyre and the benefits are appreciated by an increasing number of farmers and contractors. In fact many contractors choose to run their trailers on flotation tyres to provide the soil protection expected by their customers.

Can these tyres be retrofitted to existing trailers? It might not be possible on older trailers but for most modern versions the manufacturers have usually designed in extra space to accommodate the use of larger flotation tyres.

Opting for 560/60 R22.5 tyres is likely to add another £2000 on to the price of a tandem axle trailer. The good news is that, according to Michelin, they usually last twice as long as Super Singles.