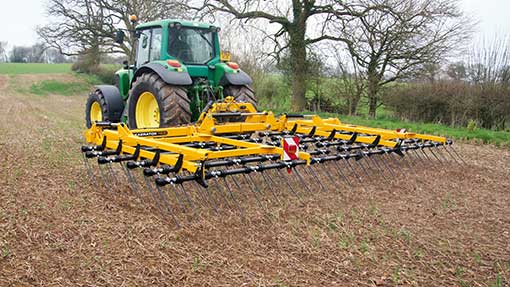 McConnel may be best known for its hedgecutters, but the Shropshire firm has been busy adding to its ever-expanding product line-up. James Andrews went to its Ludlow factory to check out some of the latest machines

McConnel made its first foray into the world of strip-till drilling last year and now it’s offering a straw rake to complete the outfit.

The new Rakaerator (pictured right) is designed to work ahead of the Seedaerator drill, which launched at last year’s Cereal’s event

Its primary job is to level out crop residues and make life easier for the drill, but it also scuffles the surface, encouraging weed seeds to germinate.

The 7.4m rake is fitted with six rows of 13mm tines as standard and there’s the option of swapping them for tougher 14mm and 16mm ones. Tine angle can also be adjusted hydraulically on the fly to make the rake more or less aggressive. 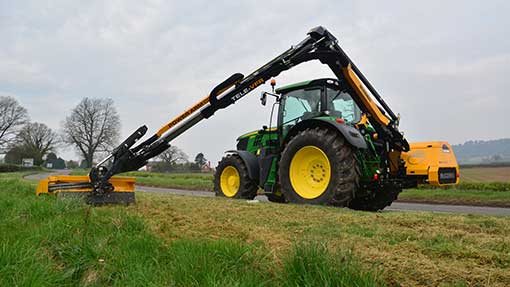 Anyone that’s spent a few weeks at the controls of a standard rear-mounted hedgecutter will be familiar with the unpleasantness of constantly looking over your left shoulder.

McConnel’s variable forward-reach system tries to solve that problem by putting the cutting head bang in line with the cab. It’s been available on some fixed-arm machines for a while, but now it can be specced on ones with telescopic arms, too.

For those with more modest budgets there’s also a new 65-series machine. This is pitched as a farmer’s machine, but it also pinches a few of the nice-to-have features from the flashier contractor-focused machines.

These include more powerful hydraulics, slicker controls and a multitude of head options. Prices for the 65-series start at £23,600.

Farmers with large swathes of tough vegetation to tame might be interested in the Ludlow firm’s beefy set of butterfly flail mowers.

The Magnum Duplex 8000 is 8m wide and when teamed with a front-mounted mower can munch though the chewiest of ground cover at a rate of 6ha/hr.

It can handle any stalk, stem or trunk up to 60mm thick and the decks are double-skinned for extra strength.

The set-up is fully mounted and folds hydraulically for road transport. For tractors without a front linkage there’s also a trailed version called the Triplex. 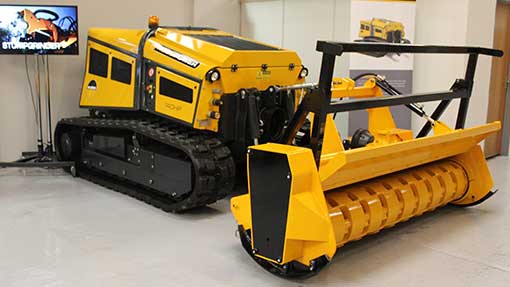 This might look like it’s been plucked straight from a Thunderbirds set, but it’s actually a real, working, remote-controlled tractor.

It’s called the Robopower and it’s mainly used for forestry and amenity work. However, with 140hp on tap, front and rear linkages and ptos, it should be able to handle all sorts of farm-based activities.

Top working speed is a pretty decent 10kph and the 125-litre fuel tank means it will do plenty of work before it needs filing up.

The fact the remote control stops working after 150m means the driver will have to keep moving his deck chair though.