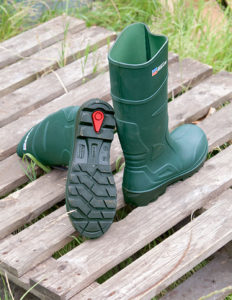 There’s a new name in the world of farm wellies – Baudou.

The French company claims to be the most popular welly boot maker across the Channel and has started selling its polyurethane farm-spec boots in the UK through Devon dealer Tony Mitchell.

The injection-moulded boots have been manufactured in the wine growing region of Bordeaux, south-west France, since 1936 and are made of a similar material to the Bekina and Dunlop boots we tried out in last year’s multi-test.

You can still see the results of our comparison by following the link below.

See also: Farm welly boots on test – which is the best buy?

The wellies are made from foam-injected polyurethane, which the company reckons is 30% lighter than the traditional PVC or rubber used in the cheapest versions. That makes them more flexible, particularly in cold weather.

The company’s Alamo range is probably the best suited to farming and has shock absorbers in the heel to reduce knee jarring. They cost £65, which puts them on the more expensive side of the welly boot market.