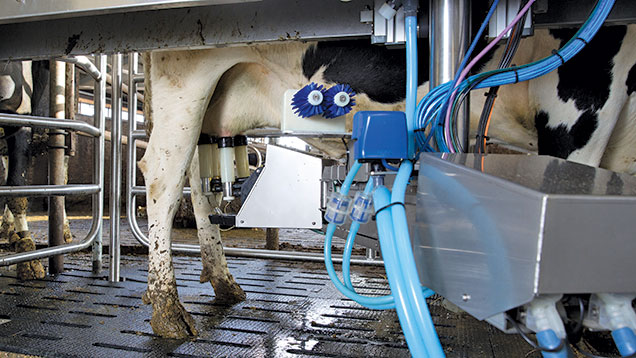 Dairy machinery specialist Fullwood has launched a new robotic milker, which the Ellesmere-based company hopes will tighten its grasp on the world market.

The biggest changes have happened at the business end of the Merlin2 – the all-electric arm, which is slimmer than before and cheaper to run.

See also: More about Fullwood in our Best of British series

The switch from compressed air to electric drive has reduced power consumption by £424/machine/year, according to Fullwood, and also makes operation near-silent. The only running noise comes from the pulsator, so the surrounding area stays pretty tranquil.

The new arm also has a greater range of movement, which means it should reach the udders of anything from a stumpy Jersey to lanky Friesians. There’s the choice of six different liners to suit the teat dimensions of various breeds, too.

A camera above the crate keeps an eye on the cow’s position and moves the milking arm accordingly. It also has a sensing system that will cushion any blows should it be clobbered by a stray leg.

Control is via a touchscreen, symbol-led system with a main dashboard showing the most important performance indicators on one screen.

Fullwood hopes it has made it easier to slot the new robot into existing shed space, too. Entry and exit gates at the front, side and rear should mean the milker can be made to fit into most awkward spaces.

The front gate holds a foldaway feed trough that shuts once the cow has finished milking and only reappears again once the following cow has been identified as eligible for milking. That should stop any false visits and hungry cows loitering in the crate.

Having two exit gates also means the milker can segregate cows, diverting them to a separate holding pen when necessary. There is no step, either, as the crate bolts directly to the dairy floor, which reduces the noise caused by hooves clattering over chequerplate flooring.

The Essential model is the first of three spec levels and provides basic cow management information. It is best suited to grazing-based farmers and costs £76,834 (including installation).

The Expert is the most complicated and can analyse fat and lactose levels of milk, as well as provide up to three different feed types to willing cows. You will have to part with a cheque closer to £86,000 to land it but, according to Fullwood, it is still about 10% cheaper than the previous model spec-for-spec. 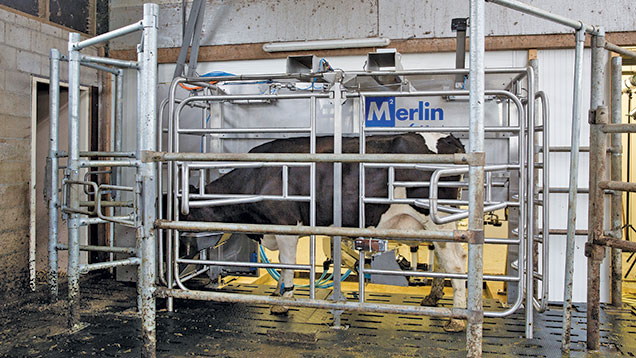 The system shares lots of common technology with Fullwood’s conventional milking systems, and the two can even be used alongside one another. That way, high-yielding cows can be milked four times a day by the robot while the mid-yielders are dealt with through a conventional parlour twice a day.

Servicing costs are about £3,000/year and include four separate checkups, although these are mainly recalibration jobs and keep downtime to a minimum.

There is also a growing market for second-hand machines. Residual values are growing quickly – you can currently pick up a five-year-old machine for about 50% of the price of a new one.

A typical single-robot setup will handle 2,000 litres/day which, in cow terms, equates to about 65 animals.

The UK market for robotic milkers has been built on small-to-mid-sized family farms with fixed herd numbers looking to reduce labour pressures.

Traditional Herringbone or rotary setups are better able to soak up increased cow numbers in growing herds, although the initial build costs are higher.

Fullwood has been selling milking robots for 17 years, but the market is still pretty small in the UK. Just 200 machines have been sold so far this year and the total number in operation is estimated to be about 1,000.

European countries such as the Netherlands, Germany and France are the biggest contributors to a 5,000-units-a-year world market.

Dairying powerhouses De Laval and Lely dominate sales, but Fullwood hopes to expand its export market by entering relatively untouched markets such as Canada and Russia. The company aims to double production in the next two years.