Managing boisterous cattle and awkward sheep can be a thankless task, but a little workshop ingenuity can make things far easier and safer.

Read on for some of our readers’ solutions to easing the job of handling livestock.

Brothers Graeme and Steven Christie built a simple sheep-handling device to turn lambs on their side at a comfortable working height for tail clipping.

The assembly fits to the end of the sheep race and has a guillotine gate at the entrance to ensure one lamb loads at a time.

When the animal reaches the front of the crate, a rope is used to pull a clamping frame around it, holding it firmly in place.

This has three securing bars: a narrower one at the neck and two curved pieces, one of which sits behind the front legs and the other in front of the back legs. 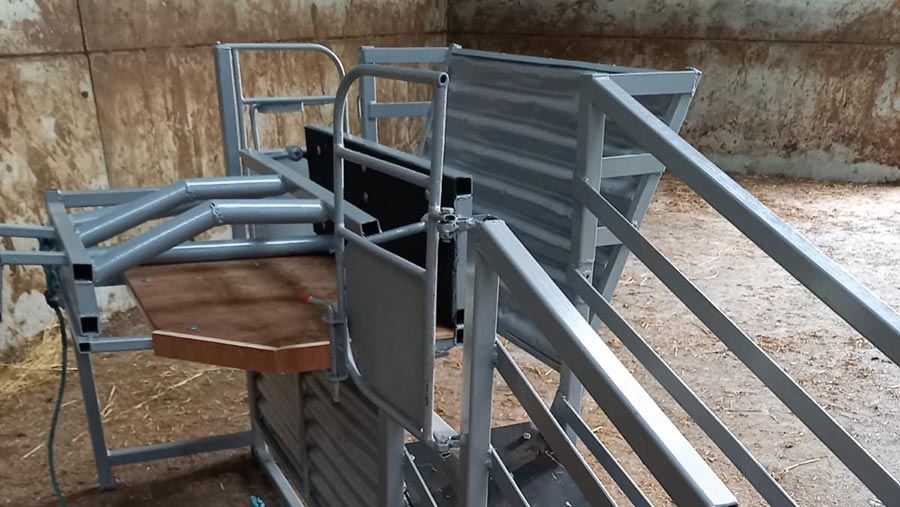 The rope is held in place by a sprung cleat and, once the lamb is secured in position, the frame is rocked on to its side. This puts the animal at waist height, so that the handler doesn’t have to bend over while working.

Although designed for lambs, the crate has also been used for checking and clipping ewes’ and rams’ feet.

All of the metal was salvaged from old pens and gates, and the only item they bought was a cleat to hold the rope, which cost £12.

It took the brothers two days to put together in the workshop on their farm in Banffshire, where they run 320 ewes.

The farm employs the services of contractors three times a year for clipping, crutching and scanning its flock of 950 ewes. But, says Mr Lord, the ewes are invariably reluctant to ascend the ramp to the clipping trailer without a great deal of human effort.

He decided this was because they were unfamiliar with the process, so he built a towable ramp to train them, which he positions at the end of the sheep race when worming.

For this, he used an axle from an old trailer, to which he fitted some home-made side rails. The height of the 18mm-thick plywood deck is adjustable on a hole-and-pin system from 40cm to 120cm.

Yorkshire farmer Thomas Simpson’s herd was struggling with slurry heel and digital dermatitis, so he installed an automatic foot-bath 12 years ago to reduce the problem.

However, as the cows were still entering the bath with dirty hooves, the issue never went away.

Mr Simpson’s solution was a sunken hoof spa for the cows to walk through before getting into the foot-bath.

This has four jets that fire water onto the back of the cows’ hooves to blast away stubborn muck and the dirty liquid then flows down a drain at the end and back to a storage tank. The only real expense was an electric water pump. 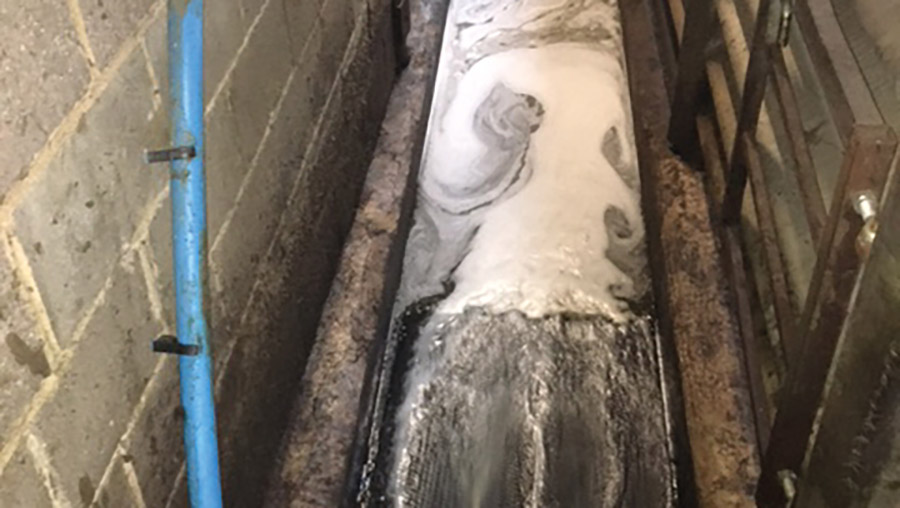 Mr Simpson says in the 32 years he has been trimming cows’ hooves, he has never seen them in such good condition, which he attributes almost totally to pre-washing ahead of the foot-bath.

It has worked so well that he now only needs to use it three times a week.

Livestock farmer Trevor Johnson was after some sturdy calf hutches for the farm he rents near his base in Axminster, Devon.

He wasn’t particularly taken with the options available to buy, particularly as his site is quite exposed, so he opted to make his own galvanised steel framework and walled it with smooth recycled plastic sheets.

The roof is made from timber purlins with a fibre cement lid and each unit has a couple of concrete sleepers on the bottom for extra ballast.

The units weigh about 800kg and have two lifting eyes in the roof, meaning they are easily raised with the telehandler for cleaning and disinfecting before new calves arrive.

The hutches are 3.6m wide and 2.4m deep and feature a 1.8m overhang to cover the pen outside. Mr Johnson has made six so far at a cost of £4,565, including all the materials and galvanising.

It takes about five hours to fabricate each frame and a further three hours to bolt the lot together.

To speed up transporting his Texel ewes and lambs from shed to field, Northumberland farmer George Hubb built a galvanised sheep crate for the front of his Manitou telehandler.

Before cutting any metal, he spent a bit of time designing the 3m-long, 1.8m-wide steel cage to make sure it was strong enough without exceeding the loader’s lift limit with a full load. 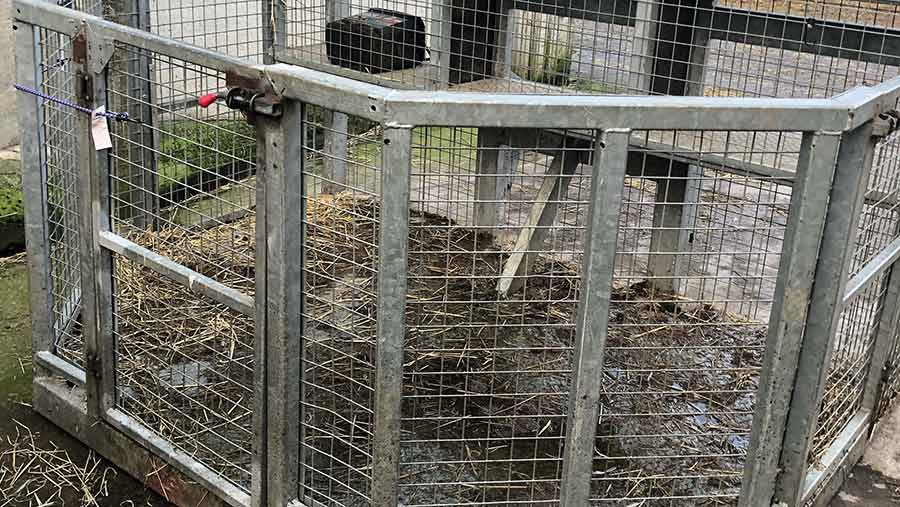 The angled corners help manoeuvrability around the yard and by including a door at the front, the operator can drive straight up to the pens and load the animals with minimal fuss.

Maximum capacity is about 10 ewes, but typically he carries six, with their lambs loaded in the cradle above to avoid them being trampled.

After years of using a bale trailer to transport his Bateman cattle crush and gates between farms, North Yorkshire farmer Henry Wainwright designed a purpose-built unit for the job. 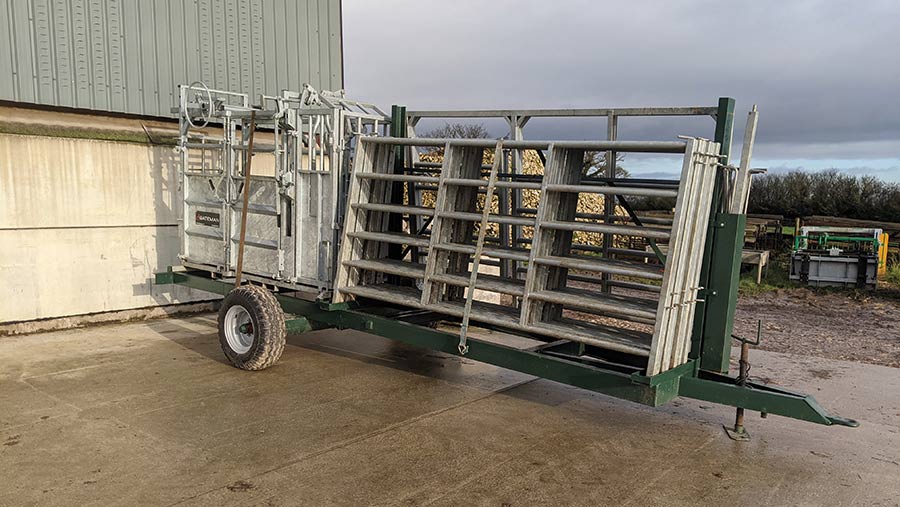 The bespoke layout features axles pinched from an old forager and steel channel recycled from a silage pit. The gates are secured using ratchet straps and there is even a handy holder at the front for pins and bars.

All in, he reckons it cost about £450, which includes the wheels, tyres and a new drawbar. It took about a week to complete.

Having purchased a Ritchie Combi Clamp, Marc Griffiths from mid-Wales soon realised he needed to incorporate a sorting gate into the setup.

Ritchie’s version was too heavy to easily move around the yard, so he built his own lightweight version with wheels and handles.

This also has a shallower ramp than the Ritchie unit, which is designed to improve the flow of sheep through the gate. 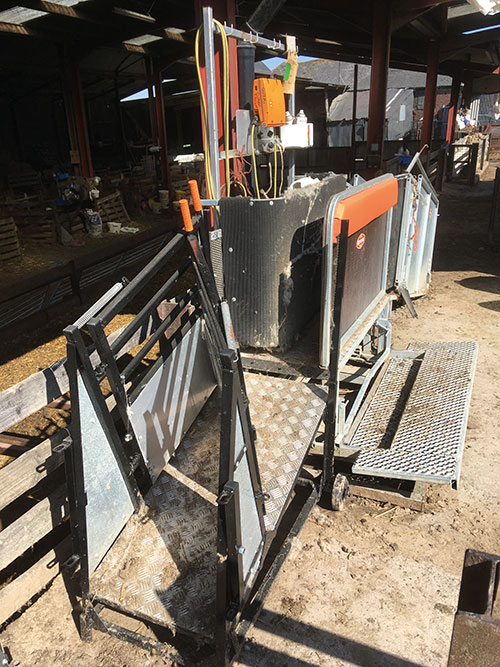 Keen to find an easy way of moving sick stock or escapees around the farm, Marc Griffiths decided to fashion a cage out of an IBC frame to sit in the back of his John Deere Gator. 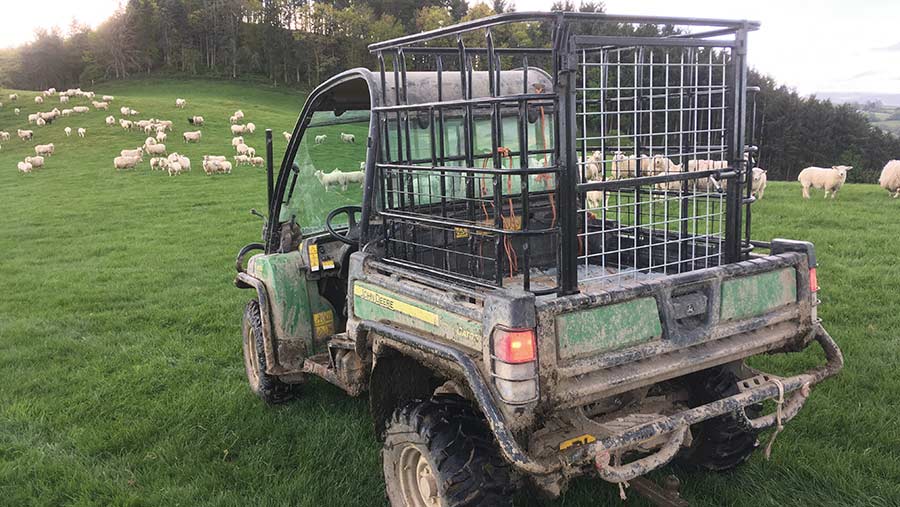 This proved ideal for the job, as the base of the IBC is almost exactly the same size as the Gator’s tub. The only work involved fitting a door into the rear of the framework.

The beauty of the frame is that it can be loaded and removed easily by one person and it doesn’t restrict the function of the rear bed like permanent canopies do.

Shifting an ATV and hurdles out to a field is no longer a palaver for David Trant, thanks to his tractor-mounted sheep-handling system.

There is space to carry plenty of hurdles strapped to the front of the main frame, and the box has a mesh floor and latching gates at either end, so forms a treatment area once the race is set up in the field. 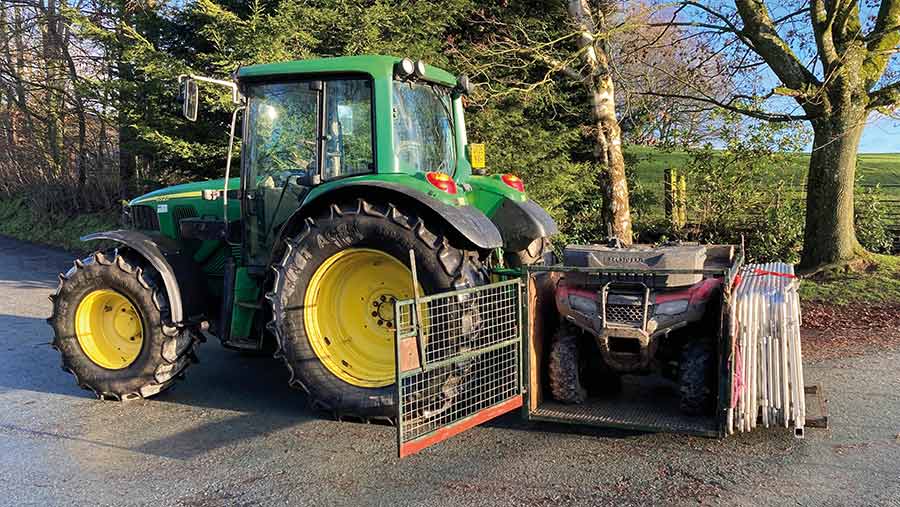 The cross-members either side of the box can also be removed to make it easier for the team to deal with the sheep, and the whole lot can double up as a carrying crate to move ewes and lambs.

To avoid lambs and ewes separating soon after birth, Francis Candy built some lightweight lambing rings that can be quickly thrown into position.

The circular frames consist of two rings of plastic water pipe at the top and bottom joined by bracing bars. Some rather rudimentary construction site fencing was used to wrap around the pens, preventing the animals from escaping.

Fully aware of the perils of being caught short of paper towel, Gwyndaf Owen knocked up a covered dispenser to protect the rolls from getting damp or blown around.

Mr Owen, a herdsman from Denbigh, cut out one side of two redundant 25-litre cans and put holes in either end.

Through this he threaded a 1.5m length of 50mm water pipe that carries the rolls of towel and hangs on parlour uprights using a couple of eye bolts. 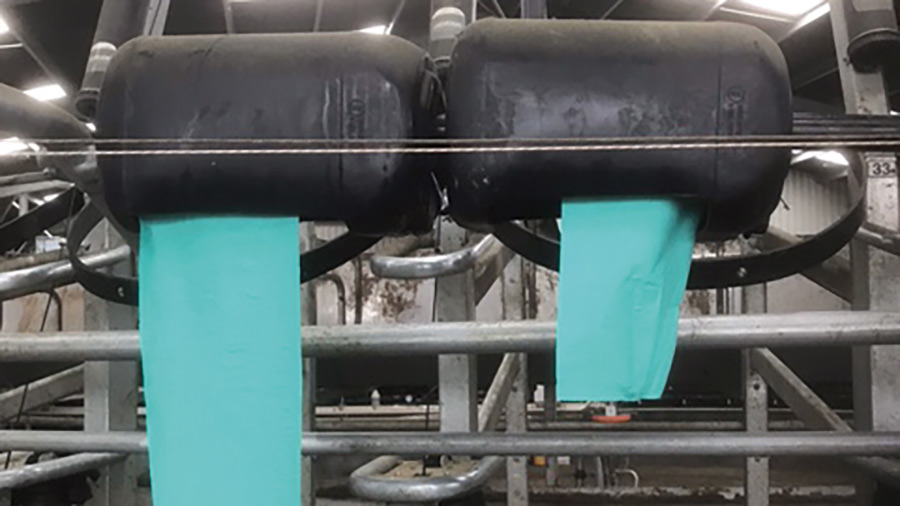 To make it easier for his wife to handle, trim and dag her Zwartbles and Blacknose Valais sheep, Charlie Smith built a custom dressing stand.

It has a platform with removable side rails which is raised and lowered on a parallel linkage with the help of a 900kg hand winch.

There is also an adjustable head restraint, which means there is no need for an additional person to hold the animal in position. 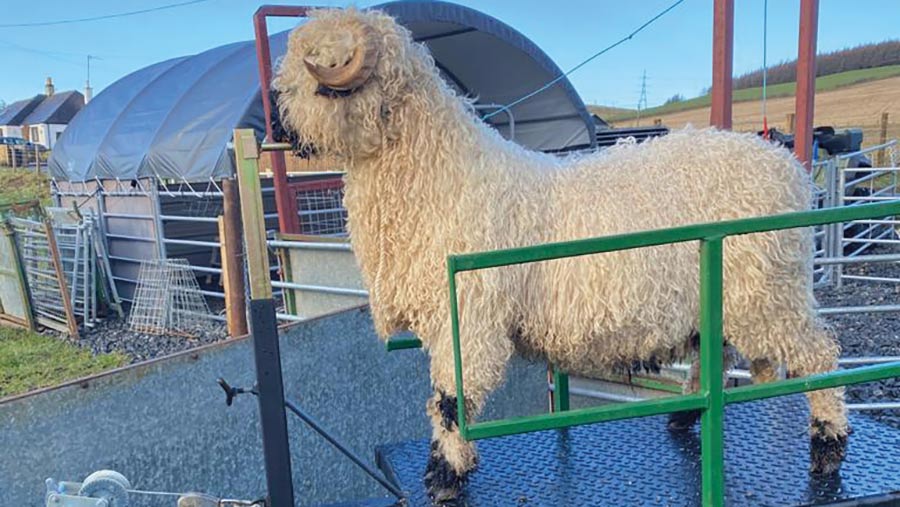 Rather than shell out for an off-the-shelf mobile sheep race, Ben Duggan from Pennybont created his own using an Ifor Williams plant trailer as the base.

This is home to a drenching race and a collection of handling pens that make life easier when he is moving between holdings.

Most of the gates were sourced from IAE, but he made a few himself. Handily, there’s also space for him to fit his ATV in the centre. 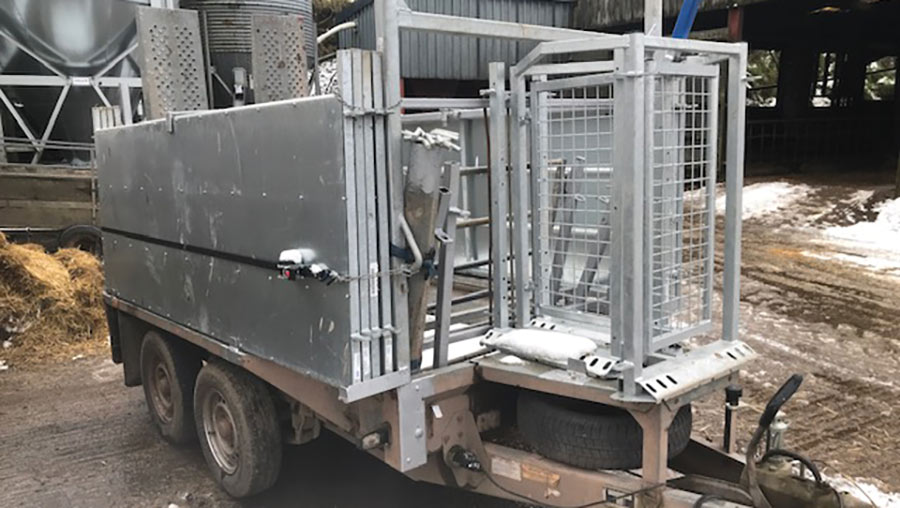 To help persuade cattle into the farm’s mobile race, Robert Sutton manufactured a set of removable hinges that hook over a feed barrier and carry a temporary forcing gate.

Once the cattle have passed through the race, the hinges can be removed and used at one of their other cattle yards. 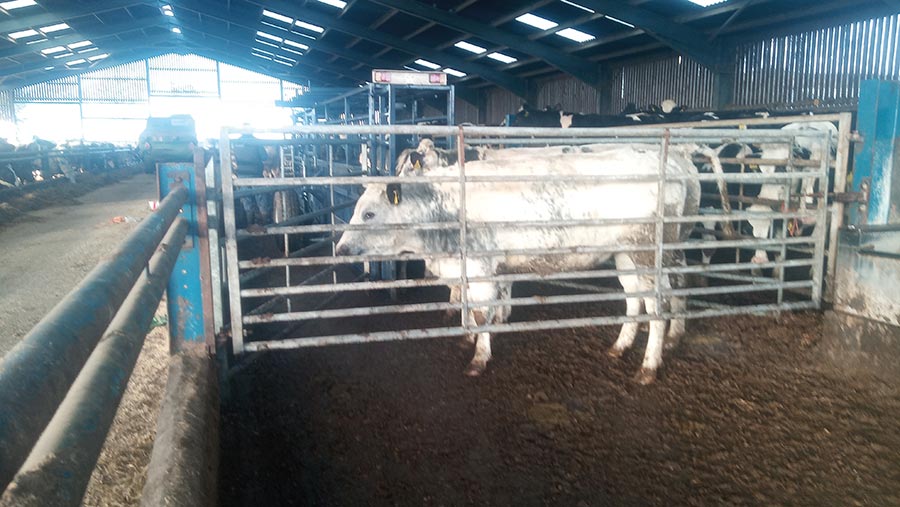 The machine has a platform with rails around the outside that the ewe walks into. This is then raised to waist height using a second-hand 24V power pack from an old truck tail-lift. 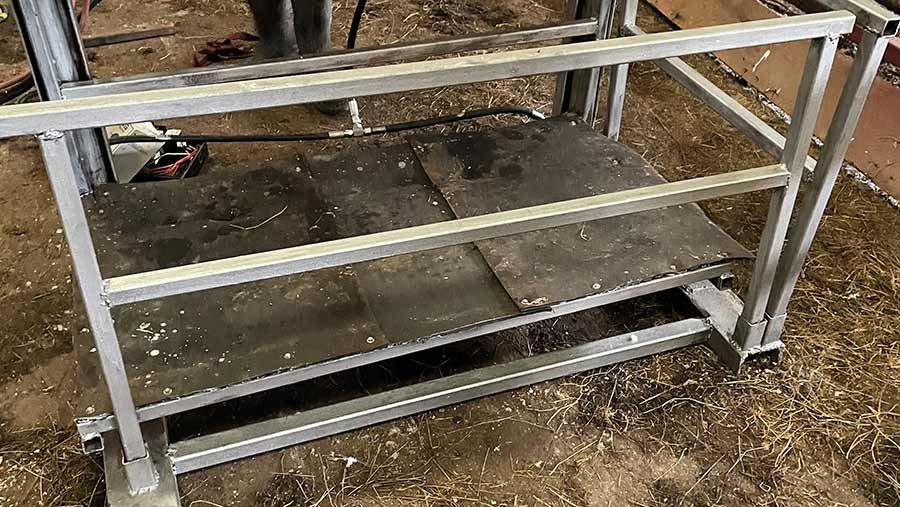 Two cheap fixes have simplified stock management for James Burton. The first is a two-in-one worming gun that also allows him to mark the sheep with just one hand while he holds the animal with the other – simply done by joining the two items with a jubilee clip. 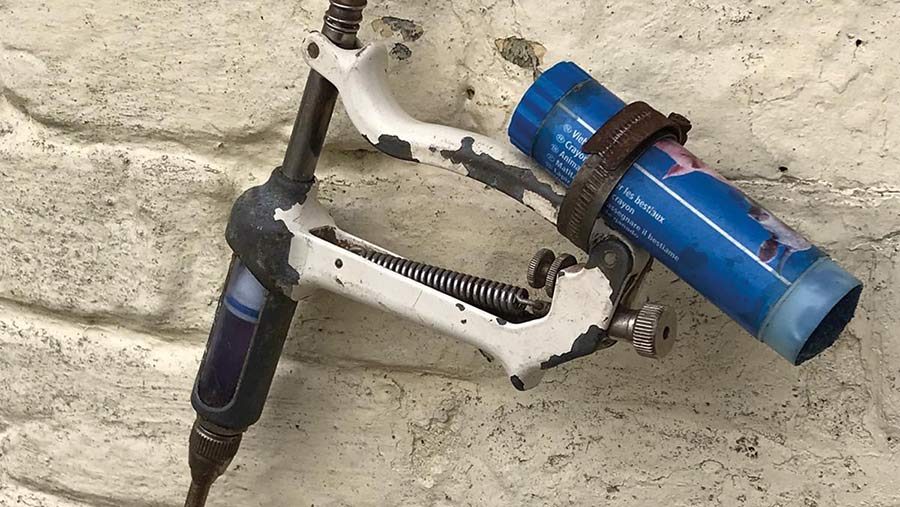 To administer iodine to calves at a safe distance he attached the end of a plastic bottle to a broom shaft. 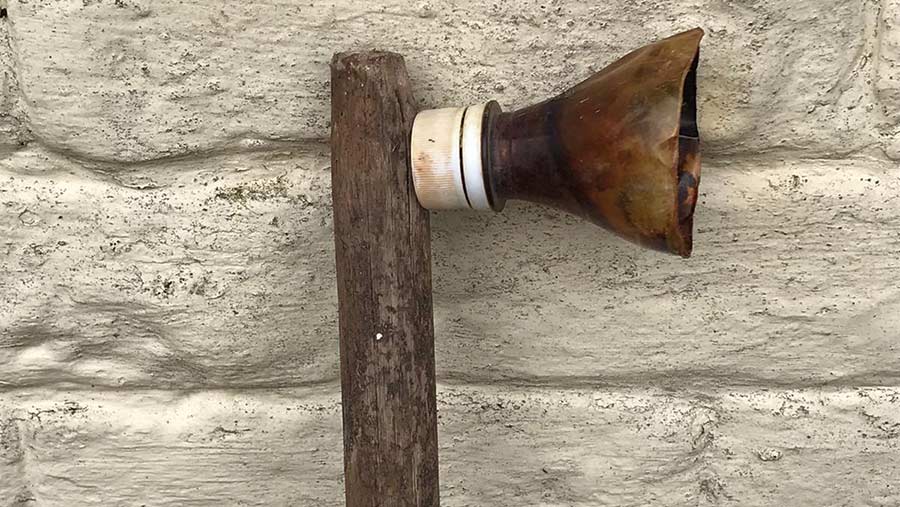