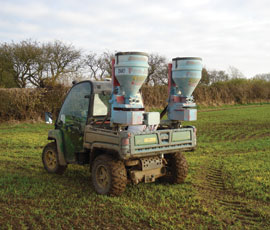 Every cloud has a silver lining. For Stuart Dyson the wet weather meant demand for his slug pellet application services doubled. “It was even too wet for our new rig in some cases; we had to get the old quad bike out to avoid making a mess,” he says.

It was on these occasions that Mr Dyson and his brother Derek, who specialise in contract slug pellet application from their 120ha all-arable farm at Patrington near Hull, were reminded just what a difference moving to a buggy-type ATV has made.

“Driving the Gator is a lot warmer and more comfortable than riding a quad bike up and down fields all day,” he says. “It copes with rough ground conditions better and with the twin broadcaster set-up spreading wider, we’re covering the ground at twice the rate.”

The current rig, comprising a John Deere Gator 855D and Stocks Fan-Jet Duo, is a far cry from the Honda trike and applicator he started out with.

“The trike was OK in a straight line but very unstable in turns; I had it over a few times,” Mr Dyson confesses. “We then moved on to Honda Foreman quads for about seven years but the increase in broadcasting of oilseed rape off the back of a subsoiler meant we had to look at a different vehicle.”

Running over the rough surface created by the subsoiler tines proved too much for the quad’s chassis and made riding the machine even more uncomfortable than before. A utility ATV was reckoned to be the answer, not only to cope with these challenging conditions but also to provide a productivity boost by carrying a bigger load and spreading wider. 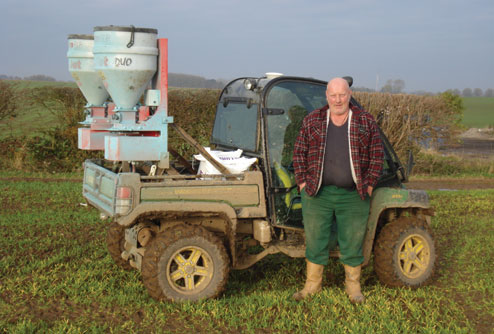 The Gator was chosen for one very simple reason: “It was the only one I could get upgraded with a 60amp alternator to power the broadcaster,” Mr Dyson explains.

The upgrade from the standard 40amp alternator was necessary to power the two spinner drive motors on the Fan-Jet Duo, which Stocks Ag developed originally to go on a tractor front linkage or self-propelled sprayer. Its outward spinning contra-rotating discs are set up to throw more to the right or left to achieve an even, full-width spread.

The Gator’s lack of a speedo was overcome by installing a Trimble EZ-500 GPS system, which also provides visual steering guidance when tramlines have been obliterated by cultivations or the drill leaves no telltale pre-emergence guides.

It is also essential when a customer has 30m tramlines but the pellets have to go on at 24m.

“In ideal conditions the Duo will comfortably spread to 30m but more often there’s a bit of a breeze that keeps us down to 24m,” says Stuart Dyson. “That still means we’re covering the ground at almost twice the rate we were before, despite having slowed down a bit.”

Difficulty maintaining a set speed, though, has resulted in the Duo being converted to automatic rate control. Electric motor-driven metering rollers have been installed, regulated by the Precision VR controller introduced last year for the Stocks Turbo-Jet oilseed rape seeder.

“It’s not always possible to work at a fixed speed,” Mr Dyson points out. “You sometimes need to slow down to travel over a particularly rough bit of ground before speeding up again, and if the ground’s very soft the Gator’s pulley transmission slows the vehicle.

“I don’t want to be telling a customer I’ve put on two bags more than I should have, so automatic rate control is essential, especially given the restrictions on metaldehyde use,” he adds.

The system still needs a bit of tweaking, he says: “For one thing, the on-off button is a bit sensitive, so it’s easy to press twice in quick succession when bumping over the field surface.”

The Gator has also come in for some attention by way of heavier duty springs and adjustable hydraulic shock absorbers to help support the weight of the Duo, 15kg of pellets in each hopper and a couple of bags in the load deck to treat about 40ha in one go.

The vehicle has certainly improved working conditions thanks to a generously glazed cab that keeps the driver warm, excludes pellet dust and provides a second seat for an occasional companion.