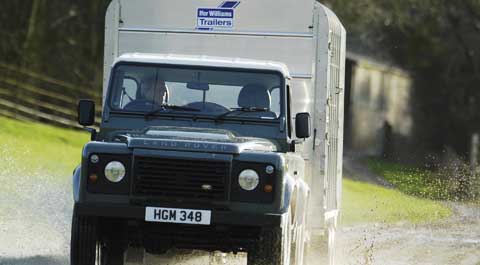 Do you drive the Land Rover and stock box on the road? Did you take your driving test after 1 January 1997?

If you haven’t got your car and trailer test you could be towing illegally. In the first of our On the Road series, we asked driving instructor Tracy Hammond of Passtime Motoring to tell us more.

What’s this test then?

Who does it affect?

Anyone who passed their test after 1 January, 1997 and who drives a combination of vehicle and trailer which totals more than 3500kg. Or who pulls a trailer which is heavier than 750kg.

Which towing vehicles does it affect?

Any vehicle that tows a trailer when the combined weight of the laden trailer and vehicle amounts to 3500kg. An average Defender is about 2500kg and a pick-up can weigh up to 2900kg, so that doesn’t leave much scope for the load or a trailer. Tractors are a different category.

Does the weight of the towing vehicle make a difference?

You’re limited to vehicles up to 3500kg maximum authorised mass (MAM) even if you’re towing a trailer up to 750kgs. The vehicle and trailer combination can be up to 3500kg MAM, providing the MAM of the trailer doesn’t exceed the unladen mass of the towing vehicle.

Where do you take the car and trailer test?

Your local LGV test centre. You don’t have to take a theory test or medical and the whole thing will usually take an hour or just over.

What does it involve?

There are three parts to the test:

(1) A pre-set reversing exercise set up around cones

(2) Coupling and uncoupling the trailer safely

Do you need to have training?

Your local LGV instructor will probably advise a one-week course, but if you’re used to manoeuvring a trailer in a farm situation you should only need about six hours instruction (depending on how long it takes you to get out of bad habits).

Do you have to come to the test in a pickup or will any car do?

As long as the car is capable of towing the trailer used it is fine. But, it does need to be fitted with a buzzer or a light that shows when you are indicating and have extension mirrors. Both of these can be bought at a camping/caravan store.

Trailers have to be 100% roadworthy, so no broken lightbulbs or dodgy handbrakes. The trailer used also has to be a closed box trailer, i.e. it has to have sides, a back and a roof and has to be at least as high as the vehicle towing it.

Do you have to renew the licence?

No, like a standard driving licence it’s valid until age 70.

What happens if you fail the test?

You take it again.

What happens if you don’t have the test and the police stop you?

They will ask you to produce your licence and check if you are permitted to tow. If you don’t have it, your insurance could be invalid and you may be in breach of the law. Bear in mind that the police may check this even if they’ve stopped you for an unrelated reason.

Are you supposed to have the trailer checked periodically too?

Legally, no, but it’s a good idea