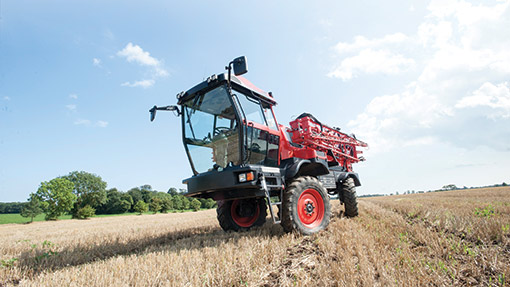 Sands Agricultural Machinery is one member of a big gaggle of British-based self-propelled sprayer manufacturers.

The unmistakeable Satsuma livery of the Norfolk-built machines has been treading the UK’s tramlines since Neal Sands started the company almost 40 years ago.

Early models were built on a high-clearance David Brown tractor and were a far cry from the Deutz-propelled machines of today.

But alongside the 50-odd new machines bolted together each year, the team of fitters also refurbishes second-hand models.

We joined service manager Shane Trenton to work through a 58-plate SLC 4000. With 4,155 hours on the clock the sprayer was closing in on the milestone 5,000-hour mark, so we’ve picked a few of the potential troublespots to look out for.

Any sprayer will want the cab filter replaced annually at least (more frequently for spud sprayers). Hoist up the cab roof to get to the filter  – it’s just a case of unclipping the old one and slotting in the £134 replacement.

Sands started life in 1975 when it built its first self-propelled sprayer with a front-mounted cab at its factory near Stalham in north-east Norfolk. It had a 1,591-litre fibre-glass tank carried by a 58hp David Brown 990 and it was a popular machine, selling 100-odd units at a price of about £16,000 each.

The following five years saw gradual improvements to the line-up before the first 24m boom was introduced in 1980. It was thought to be the first one made by a UK manufacturer and was closely followed by Sands’ first hydrostatic drive sprayer.

Production got serious in 1986 with the FCH-T model, which offered a 3,600-litre tank and was powered by a turbocharged 148hp, Deutz six-pot.

In 1998, the company introduced gull-wing booms on its sprayers to get past rules limiting the height of machines. It also developed its prime-and-purge system that continuously pumped liquid along the booms and back to the tank for quicker starting and stopping at the nozzles.

The SLC 5.5 was launched in 2006 and was the largest production-built sprayer at the time. It was powered by a 207hp Deutz engine and carried a 5,500-litre tank.

Since then, the company has sold the Vision model and most recently the Horizon, which is the first Sands machine to use AdBlue to to reduce emissions.