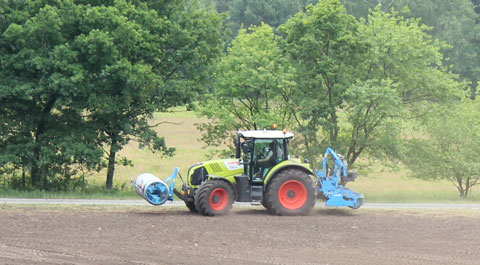 They save time, increase productivity and reduce driver fatigue, so should you invest in a headland turning system?

Headland turning systems are not only designed to take the chore factor out of tractor driving, they also increase productivity.

We’ve all been there – pitch-black headland manouevres can be like pinning the tail on the donkey and the result is often a rather unsightly wiggle as you find your way in to the bout.

“With the high cost and size of modern implements it makes sense to ensure they spend the maximum amount of time in work – and that means having a programmed headland turning sequence which can be replicated over and over again,” says John Deere’s Ian Clark. 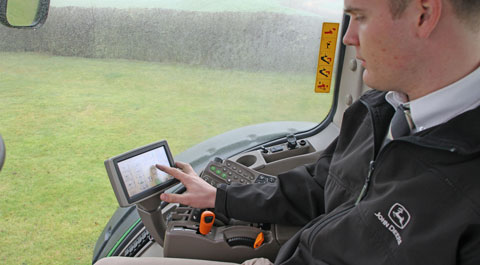 John Deere’s iTEC Pro system was introduced in 2007 and since then the company reports it has become increasingly specified by purchasers of the Waterloo-built 7R-, 8R- and 9R-series tractors.

The standard headland management functions – including engine speeds and hydraulic functions – can be pre-programmed, but the system really comes into its own when it is used in conjunction with AutoTrac navigation.

While the implement is being readied for its next bout, the tractor automatically steers itself to line up at the correct point on the headland. The headland is mapped by driving the tractor around the field and operators can set a virtual mark from where the turn will begin.

To be able to utilise headland turning, tractors need to be suitably equipped – John Deere tractors need to have the GreenStar 2600 or 2100 display and a StarFire iTC receiver with SF1, SF2 or RTK signal accuracy. 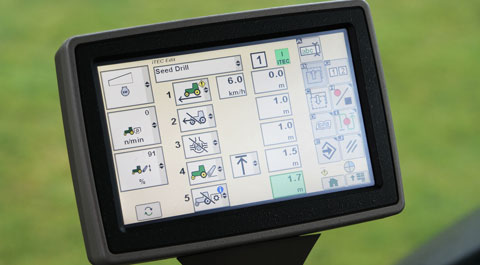 Claas reckons its Auto Turn system, which can be used with any brand of tractor, can also solve the problem. Like iTEC Pro, the operator must mark out the boundary of a new field, which can subsequently be saved for future use, including any obstacles.

Before getting started the driver also needs to select how far from the headland the menu pops up, as well as turning speed – which affects the size of the turning circle – and the number of bouts left between each run.

Once in work the driver just has to select whether to turn left or right on the pop-up menu. Pressing the “go” button begins the turn – this is where it differs from the completely automatic Deere system.

“The key part of the system is that it makes sure implements enter a bout dead straight,” says Claas steering specialist Edward Miller.

“That way you don’t end up with a wobble as the guidance kicks in and tries to get the implement running accurately. There should be far less overlapping and misses for those operators that use the Auto Turn system,” he says.

Auto Turn costs £900 and is available on all current Claas GPS Pilot S3 systems; it can also be activated on any terminal bought over the past 18 months. 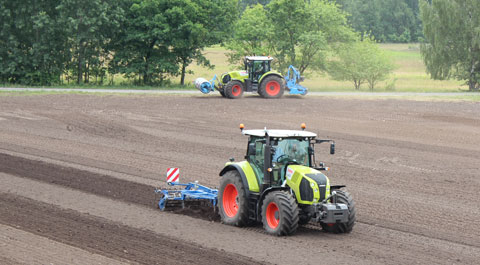 Running a total of 640ha (1,600 acres) Mr Strawson majors in winter wheat, oilseed rape, winter barley and winter oats alongside vining peas and potatoes, on a range of soil types from heavy clay to blown sand.

A requirement of his iTEC Pro system is that his tractors need to be fitted with a GreenStar display and a StarFire receiver.

“We have a 2600 touchscreen display and use the SF2 receiver which provides accuracy to within +/- 2cm in both straight and curved lines,” he says.

“Over the years we have managed to map the headlands of all our fields so now it’s just a matter of entering the field name and then setting up turns with information including speed changes, four-wheel drive, linkage raise/lower, and hydraulic operations such as seed cut-off and coulter raise,” he explains.

Experience has also taught him that planning is needed to get the best results from the system – particularly when drilling.

“When programming the drill’s headland turn, we input commands to start slowing down the tractor in stages some yards away from the headland so that as it crosses the headland mark it is doing about 6kph,” he says. “The seed flow is shut off before the headland is reached so the seeds already in the feed pipes are not wasted and the headland is not over drilled, and then the coulters are raised.” 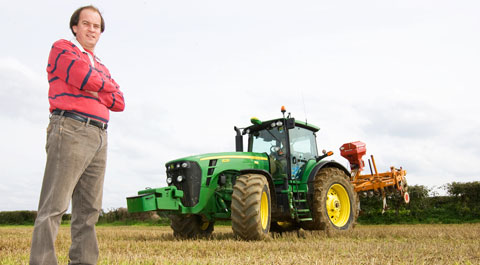 The AutoTrac guidance system, which has been programmed with the 6m working width of the Horsch Pronto drill, performs the turn, restarts the seed flow and lowers the coulters into work.

“I like to drill at speeds of 14kph and occasionally faster, which would be difficult without automatic steering guidance,” he says.

But drilling at 14kph can cause the drill’s angled discs to act like rudders and pull the drill to one side by up to 4cm, says Mr Strawson. This can leave a noticeable gap, which can be compensated for by altering the working width setting on one side.

Interestingly, despite all the technology being used, he still insists on using drill bout markers – a way of ensuring all is working correctly, he points out.

For oilseed rape a subsoiler with a pneumatic seeder is used, which places the seed behind each of the legs spaced at 55cm. For this operation he sets the iTEC Pro to shut the seed off at the headland mark, raise the subsoiler and turn the tractor to line up on the next but one bout.

“It’s the same technique we use when cultivating,” he says. “We just fill in the gaps later.”

In terms of workrate, Mr Strawson is convinced the headland management and auto-guidance system results in twice the output of a manual system.

“It sounds like a big increase but you can work at a faster rate, cut headland turn times by up to a third, work into the night with no visibility problems and fewer overlaps,” he says.

“And the operator can spend more time keeping an eye on the implement.”

He adds that, in his opinion, the cost of the iTEC Pro, should pay for itself within a year with improved output, better timeliness and saved fuel.