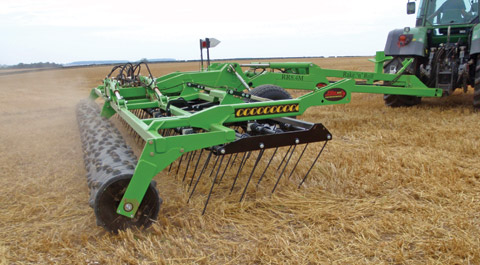 The stubble rake is fast becoming the must-have weapon in the min-till and direct drilling arenas. With little new herbicide chemistry in the pipeline and slug control products under threat, there is more pressure on growers to make better use of cultural controls.

Longer rotations, spring cropping and rotational ploughing are some of the tools available. And now the rake is here to help.

According to Claydon’s Charles Eaton, sales of stubble rakes have increased dramatically in recent years as an more growers recognise their value when direct drilling or strip tilling to establish crops.

“We started selling stubble rakes three seasons ago and sales have increased from just 20 units in the first year to more than 100 this year,” he says.

For an implement with such an innocuous appearance which would probably struggle to make it on to a “best invention of the year” list, these are impressive figures, particularly if, as it seems, they are being replicated by other manufacturers.

Claydon’s £12,500 7.5m version has a total of 120 tines, each 60cm long and made from 16mm diameter spring steel. Set in five rows and coiled around bars which are an integral part of the frame, the pitch of the tines can be adjusted hydraulically from the tractor cab.

“A high operating speed is essential to get the best results,” says Mr Eaton. “A tractor around 140hp with suspension should be able to work at speeds of 30kph providing the terrain allows.”

At this speed tines are vibrating rapidly fore and aft, as well as from side to side so the entire soil surface is moved down to a depth of 10mm – sufficient to encourage weed seeds to develop but not so deep as to cause excessive moisture loss.

The tines also spread crop residues evenly across the field and prevent the creation of damp mats of straw which can be havens for slug development. A 15m model is also in testing.

Weaving’s stubble rake production began in 2002 as a result of collaborative work with Worcestershire farmer Jim Bullock. He is a firm believer in the rake and the role it has to play in zero-tillage systems.

“To make direct drilling work you need lots of earthworm activity going up and down through the soil profile and so leaving the straw on top is important,” he explains.

“Direct drills are very expensive and having made your new purchase you don’t really feel like spending any more money. However, the straw rake is a relatively inexpensive implement that is a worthwhile addition to the armoury.”

Although modern no-till drills are designed to cope with chopped straw and residues, they don’t heaps of trash that can block coulters. A system is needed to spread the residue efficiently. In addition to creating a drill-friendly environment, the rake offers a great opportunity to encourage weed seeds to chit and reduces slug burden by despatching eggs and nests.

“Get the rake going first thing in the morning and cover the land that was combined the day before. Don’t let damp straw settle as this can cause blockages,” says rake user Andrew Hughes of Trinley Estate near Andover, Hampshire.

“Run the tines vertically and you get much better flow of material through the rake, but if you want to do more of a spreading job it’s better to angle them backwards.”

Weaving Machinery manufactures three models. Starting at £6,400 and running to £24,800, there are 6m and 8m hydraulic folding options as well as a 12m trailed version. They use 16mm thick tines arranged in five hydraulically-adjustable rows. The 8m version is the most popular and requires 160-180hp up front.

After a stint farming in the USA, Cambridgeshire farmer Chris Lane saw the merits of harrowing stubbles to spread crop residues and get a decent weed chit. They are commonplace in North America, so he decided to adapt the stubble rake principle for the UK.

He got together with independent cultivation kit specialist Philip Wright and they developed the Rake & Roll.

So why bother with a roller if a standard rake works so well?

“The principle of adding a roller was to ensure good seed-to-soil contact to make sure we got a good reliable flush of weeds,” explains Philip Wright.

“We didn’t realise the other benefit would be depth control. By raking we’re only looking to disturb the top 5-6mm where this year’s seed has dropped but it’s not always that easy.”

Tine angle needs to be as close to vertical as possible to ensure they vibrate fore and aft as well as left to right. But without a roller, the steeper the pitch of the tines, the more they sink in. By carrying the unit’s weight on the roller, working depth can be kept consistent.

So why a rubber roller?

“For the rake to work effectively we need to be up around the 15kph mark,” says Mr Wright.

“A rubber roller has a cushioning effect allowing decent speeds and because of its flex, it has a flatter contact patch – that’s important when you consider it’s only got milliseconds on the ground it passes.

“It also keeps clean when things get a bit damp. If the tyres start to pick up soil then it’s probably too wet to be out there.”

A Rake & Roll is reckoned to weigh about a much per metre as a standard set of cambridge rolls and so with the relatively high speeds required to do an effective job, a tractor of over 200hp is needed on a 12.2m set.

Rotation – While there are no hard and fast rules for using these rakes, as an example, a heavy land farm growing oilseed rape followed by two wheats might employ one on the rape stubble as soon as the residues become dry and brittle. This would be followed with a second pass a couple of weeks later when weeds and volunteers have started to germinate. A spray-off before drilling would follow.After the first wheat has been harvested, a single pass with the rake could be beneficial in encouraging weeds to germinate evenly so that they can be sprayed off. For second wheats, time restrictions may be too tight before oilseed rape needs to be sown.

Bale or Chop? Where there are severe weed problems there is a good case for baling straw to allow the tines to expose as much of the ground as possible, but where chopping is the only option, a good spread is imperative.

Direction of travel – Normal practice is to work fields at an angle of about 30 degrees to the way the crop was drilled so that the tines always cut across the rows. To prevent depositing crop residues on the headlands, the rake is not lifted as the tractor turns.