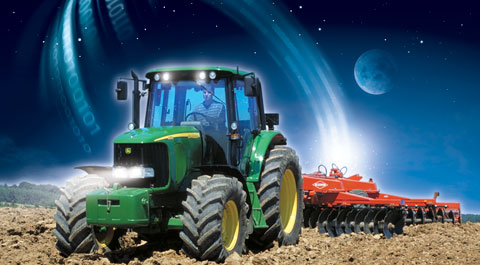 Just reading the word telematics is enough to make many farmers start nodding off.

But behind this pretty unexciting word is a whole new world of technology that could improve the way farmers and contractors manage their kit. Telematics can also help cut running costs, improve productivity and outsmart pesky thieves.

So what exactly is telematics all about and how can it help farmers look after their machinery?

In short, telematics systems allow a vehicle to send all its personal information to a computer. This includes details of where it’s working, what it’s doing and how much fuel it’s using while doing it.

At the computer end, there’s usually a password-protected website that the owner can visit to view all this information. There is usually an annual fee for the privilege, too.

The box of tricks that goes in the machine to make it do all this happen is actually quite simple. It usually includes a GPS receiver that transmits the machine’s location and a mobile phone modem to send the information to the internet.

Some of the more advanced ones also plug into the machine’s on-board computer to transmit more detailed information such as fuel consumption and machine settings.

They’re also pretty straightforward to install and require no input from the operator once they’re fitted. The amount of information the farmer gets back from the system depends on the package they go for and there are usually two types – basic and advanced.

Basic services usually allow users to track the location of all machines on a map and set a virtual operating area called a Geofence. This means the computer knows where the machines should and shouldn’t be and will send a text message to the owner if one of them goes astray.

Owners can also set curfew times that the machine can operate within. These will trigger a similar message if someone tries to start it outside those times.

The basic systems will also often also give details of engine hours and how long the machine spends idling, working and in transport. This helps farmers work out if their drivers are using the machine efficiently. For example, if the machine it is spending much more time idling and moving between fields than it is working, the farmer can changed the way a field is tackled to make the whole process more efficient.

One of the big plusses with these basic systems is that they can usually be set up on any machine that has a battery. That means farmers and contractors with lots of different coloured kit can keep tabs on the whole fleet with just one system.

The fully-fledged telematics packages go a bit further and get hold of detailed information about the machine’s settings from the CanBus connection. This means owners can see detailed information on each machine, such as its computer settings, fuel consumption figures and details of any faults.

On more complicated machines such as combines, the advanced systems allow owners to look at all the major settings such as concave width, fan speed, sieve settings and grain losses from the comfort of the farm office. If they have more than one combine they can also often compare the performance figures of each machine to see which one has the best setup.

These more advanced systems generally can’t be installed on other maker’s kit. But those wanting to look at multiple brands on one screen can set up the rest of the fleet with the basic version.

Some manufacturers are now fitting advanced telematics systems as standard on their higher-end machines and are offering free subscriptions to their websites for the first year so the owner can try it out.

Farmers usually have the option to let dealers see some of this information, too, so that they can diagnose problems in the office before heading out to fix them.

Most of the big machinery manufacturers have either launched a telematics system or are just about to. Generally they offer a similar level of service, but Claas offers a particularly advanced setup on its combine harvesters.

Click on the tabs to see what some of the key players are currently offering.

Claas was one of the first to get into the telemetics game and it has been offering an advanced system – called Telematics – on its top-end combines since 2006. There are now about 500 people actively using it.

The system is plugged into the combine’s CanBus connection and gives the man in the office more information about its performance and setup than the man sitting on the seat. Everything from the drum speed to the amount of grain it processes per hour is recorded and sent back to the office computer via the Claas servers in Germany.

The system is fitted as standard as part of the firm’s business pack on flagship 770 and 780 machines and is an optional extra on other Lexion and Tucano combines. It can also be fitted to some older machines, but the amount of information that can be extracted varies according to the type of CanBus connection.

Automatic field recognition is one of the latest additions to the system. This means a combine will immediately recognise a field when it drives into it and will automatically send a yield map back to the office computer once it’s been harvested. All this happens with no input from the operator.

The system is also available on all 900-series Jaguar foragers and the firm is about to start offering it on tractors, too. The tractor version will have a new feature that captures information from implements fitted with an ISOBUS connection. This could potentially be used to automate the keeping of field records for jobs such as spraying or fertiliser spreading.

Claas also has a basic telematics offering called Agro-Scout that can be installed on almost any machine.

Subscription – £800 a year per machine

Subscription – £800 a year per machine 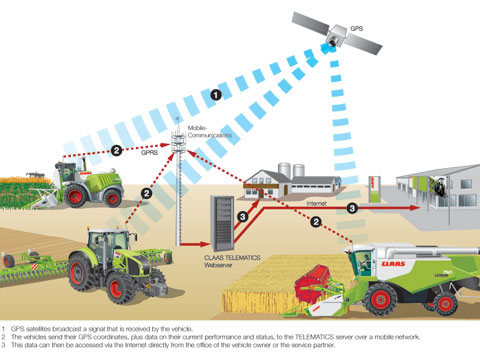 Agco’s Agcommand telematics system also comes with two versions. The advanced package is available on most Massey Ferguson, Valtra and Challenger kit and all machines can be viewed in the same system. Fendt uses a slightly different system that isn’t currently compatible with Agcommand.

Unlike some other manufacturers Agcommand isn’t usually fitted as standard and has to be picked off the options list. It offers all the usual features and can pull detailed information from the tractor’s Canbus connection. It also has the ability to harvest information from ISOBUS implements.

Agco’s Blair Hardy says they have already had interest from a large bailing contractor who would be able to use the system to keep tabs on the number of bales produced in each field as well as their moisture content and exact location. 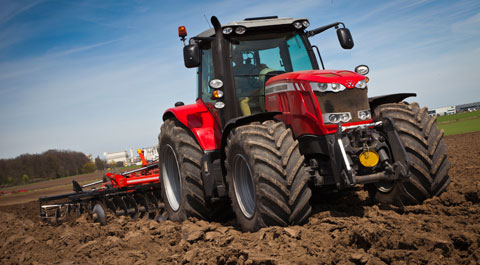 Deere’s basic version of its JD link telematics system (JD Link Select) can also be fitted on to other manufacturer’s machines. But like others on the market, it only offers more basic information such as machine location, running times and maintenance schedules.

Deere’s top end JD Link Ultimate adds the usual advanced features, but can only be fitted to John Deere machines.

JD Link Ultimate is fitted as standard on 7R, 8R, 9R tractors, all 80-series foragers and all T and S-series combines. It can also be factory fitted on 6Rs and is available as a retro-fit option on older 30-series tractors and 50-series foragers.

There are also iPhone and Android smartphone apps available so owners can keep track of their machinery when they’re out and about.

Subscription – £200 a year per machine

Free one year subscription when buying a new machine

Subscription – £400 a year per machine 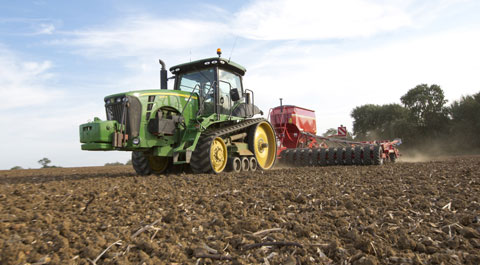 Although most machinery manufactures are offering their own telematics systems, there is also the option of going for an independent kit.

Trimble offers one such system. My Connected Farm uses a Trimble GPS receiver and mobile modem that allows any vehicle on the farm to communicate with the site.

This offers pretty much the same features as the manufacturer’s basic offerings, plus a bit extra.

All the information that’s in the industry standard CanBus format can usually be extracted, says Will Mumford from Trimble dealer AS Communications. “Even if the machine doesn’t have CanBus we can hook the it up to the alternator to record engine hours.” This also allows the site to keep tabs on service intervals, he notes.

The system generally can’t extract as much information about the machine’s individual settings as manufacturer’s own top-end telematics offerings, though.

There is also an Android smartphone app available.

Subscription – £180 a year per vehicle