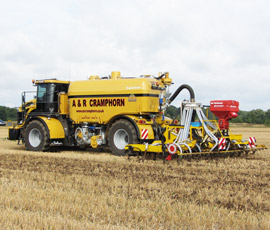 Its size and cost may mean that it’s likely to appeal to the very biggest farmers and contractors but if you want sheer throughput of slurry or digestate, the latest Challenger TerraGator 845 applicator is probably hard to beat.

The first one in the UK is being operated by contractors A&R Cramphorn of Whissendine, Rutland. It has been working at Milton Ernest-based Bedfordia Farms over the last few days and the farm reckons its fertiliser bills have been cut in half by injecting digestate to make best use of its nutrients.

The digestate comes from Bedfordia Farms’ sister company Biogen’s two anerobic digesters and the by-product, a nutrient-rich digestate, is spread on to land.

“By using the digestate we have been able to cut our nitrogen applications from 1,100t to 500-600t a year,” says Bedfordia Farms’ managing director Ian Smith. “We have the slurry available every year, so it is a hedge against costs regardless of the oil price.”

The digestate mainly provides nitrogen, with some P and K. Each batch is analysed before spreading so that the nutrient content being applied can be precisely calculated, recorded and taken into account as part of the overall fertiliser plan.

The TerraGator 845 injects digestate 50-100mm below the surface, making the most of nutrient value and cutting odours sharply.

Changes to the machine include a bigger 18cu m tank, front entry to the cab door, an upgraded 8.4 litre 398hp engine and a CVT 40kph transmission, which can be operated in lever, pedal or cruise control mode. Functions like switching on the main pump and engaging the chassis “dog walk” are also incorporated into the CVT joystick.

Applicators are supplied by third parties, and range from the Claydon tined cultivator injector used by A&R Cramphorn to grassland injectors, strip till applicators and dribble bar systems.

The optional Superload filling system means that an 18cu m tanker can be filled in two minutes using a separate centrifugal pump. This pushes the slurry through the pipe, creating the vacuum and increasing capacity by 10-15%.