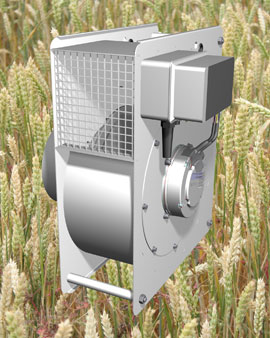 A revolutionary new fan from Evans & Pearce to use with grain cooling “Polycool Pedestals”, will reduce energy consumption by two thirds and pay for itself with in 12 to 18 months, said the firm.

In addition it is much lighter, with integral handles for easier handling than conventional units. It also features an integral differential temperature control system, the first of its kind.

Evans & Pearce Polycool Pedestals are designed to help ensure grain quality is maintained during storage between harvest and the time of sale. They do this by keeping the grain cool so it does not heat up and fall foul to insect infestation or storage moulds.

Its inbuilt differential temperature control system allows units to be set up to meet specific performance requirements. Consequently they run when needed to ensure grain stays cool but turn off automatically when ambient air temperatures are too high for effective cooling.

This enhanced control feature is complemented by the use of permanent magnet motor technology. This means they consume less energy for the same performance yet are smaller and lighter than conventional motors.

The integral controls of the Evolution fan eliminate the need for a separate control box. This facilitates both operation and installation. Temperature settings are entered directly on the fan which will then respond to a remote sensor and switch on/off accordingly.

“The Evolution fan will give our customers benefits in three areas,” said Rob White, of Evans & Pearce. “It saves on energy costs, which is increasingly significant, facilitates neater installation and operation, and is easier to carry so it’s better on the health and safety front as well.”

“We liked the idea of the Evolution fan because of the built in differential temperature controller. We had previously been using the Evans and Pearce Crop Cool system which was very good but it required leads draped across the top of the stored cereals”, said Mr Harris.

Because the farm already owned a number of larger pedestals with 200mm extension ducts on the top, the Evolution fans fitted straight onto their existing pedestals.

The new style “brushless” motor used to drive the Evolution fan means the power consumption for cooling their grain is only 1/3 of that used by their other fans. This represents a substantial cost saving over the period they were in situ for and offset the investment made on the purchase of the Evolution fans.

“We are very impressed with the way the fans consistently cut in and out as the outside air temperature changes. We’ve emptied the stores completely and everything has been in great condition with no problems at all,” said Paul.

“We’re really pleased with the new fans, they do a great job. We initially decided to buy them because we liked the idea of a built in differential temperature controller. The power saving is an added bonus and we’ve found they’re also much lighter and easier to handle when moving them around the store,” added Andy Baillie, farm manager.

The new Evolution Fan and Polycool Pedestals will be exhibited at Cereals 2011 (June 15/16) by distributor Agricultural Supplies Services on stand K1123.