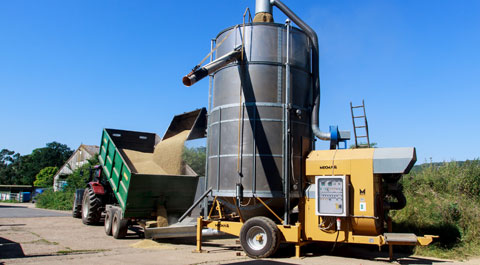 For many farmers the humble yard tractor is still the tool of choice for keeping the mobile dryer churning away come harvest.

And you can see why – drive it into place, attach the pto, clip on a couple of battery terminals and away you go.

But there are a few drawbacks. With fuel prices going up faster than China’s meat consumption, the amount of diesel the old girl drinks starts to add up.

There’s also the problem of reliability as it isn’t usually the pride of the fleet that’s volunteered to sit in clouds of dust all day. And the sound of the engine droning away hour after hour gets pretty wearing for you and the neighbours, too.

But one of the biggest niggles is for those running larger dryers. Because they are fairly power hungry the small yard tractor isn’t usually up to the task. That means puling a larger tractor out of active field duty to do the honours.

There is another way, though. Mobile dryer manufacturers have been offering three-phase electric drive on their machines for quite a while and they’re now starting to outsell traditional pto-powered machines.

All three of the big names, Master, Opico and Mecmar are finding that over half the bigger driers they are selling are electrically driven models. This is partly because they are quieter and cheaper to run, but one of the biggest drivers is the fact that they offer a much higher degree of automation.

With some of the more sophisticated electric dryers operators can brim a large intake hopper and leave the machine to fill, dry, cool, empty and refill all by itself. If there’s a big enough filling hopper it can be left to its own devices all day.

Conversely, when relying on the mechanical power of a tractor there is no way of getting round the fact that someone has to hop on the seat and engage/disengage the pto by hand.

For farms that already have a three-phase electricity supply, the decision to switch to an electric dryer is a more straightforward one. You’ll pay about a £2,000 to £6,000 premium for a basic electric drive, but it could be as much as a third of the price of a tractor-powered one to run.

That means it won’t take long to repay the initial spend and you’ll have a nicer machine to use. There is a slight caveat though. Many old three-phase installations will be 60-amp supplies and these will probably only be able to cope with a 12t dryer. Also, those wanting to run a bigger machine are likely to need a 100amp supply, which is less common.

If there’s no three-phase on the farm you’ve got a couple of options. Firstly, you can consider investing in a three-phase electrical supply, which depending on your area and local infrastructure can cost anything from a couple of thousand pounds to tens of thousands.

If this is too hard to stomach there’s the option of using a diesel-powered generator. This detracts from the appeal slightly as it has to be fuelled and it’s not as quiet as a fully electric setup.

However, many users report that it’s still cheaper to run than a tractor and they’re not tying up a machine all season. Ex-hire generators are also a popular choice and can be picked up for as little as £5,000. They have the added benefit of giving the whole farm an emergency power supply.

There’s also the option of hiring a generator for the season.

On the flipside, there are a couple of minor drawbacks with electric drive. Firstly, because the dryer needs a powerful and reliable electricity supply it is harder to move it from site to site. Using a generator to power it, though, can solve this problem.

Electric dryers also cost a bit more to buy and set up, particularly if the farm’s electricity supply needs any alteration or a generator is required. However, the cheaper running costs should offset this in the long run.

Farmers running smaller dryers (12t and below) are less likely to see a financial benefit from switching to electric as these machines have a low power requirement and are already pretty cheap to run.

If you’re lucky enough to have a set of solar panels on the farm, switching to an electric drive dryer looks pretty attractive.

Sussex grower Richard Gadd owns a 250ha arable farm in the village of Frittleworth near Pulborough and has installed 208 solar panels on his grain store roof. 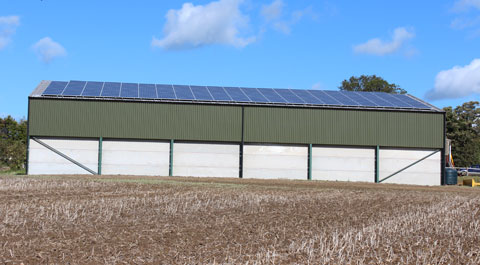 After switching his 27t mechanical Master dryer for an electric equivalent he managed to run 300t of wheat through it for less than £4 (not including the cost of running the burner of course). “We only used 36KW of electricity at 10.3p/ unit to dry the whole lot.”

He also put 400t of malting barley through his machine. Some of this was dried overnight so it used slightly more, but the bill was still only £13.

That’s considerably cheaper than the £70 worth of diesel he burned each day when he was using a 100hp Fiat to do the legwork.

The electric dryer is also whisper quiet in comparison, he says. 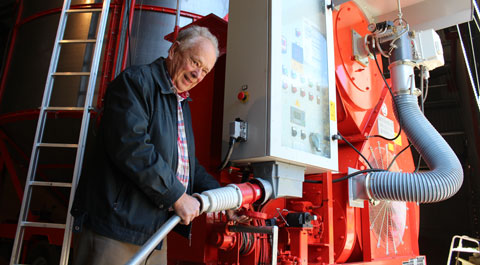 Getting the best from a Master dryer