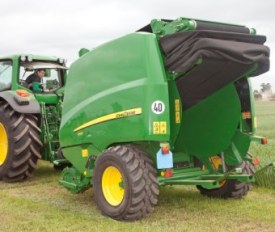 After making quite an impact at the Paris Sima show in February, John Deere’s innovative curtain-backed round baler range had its first outing in the UK. The 900 Series variable chamber range has a new fast release system that cuts the time it takes to unload a bale by 10 seconds to just 5, thanks to a fabric curtain which replaces the traditionally heavy rear door, says Deere. Flexible panels take the place of more conventional baler side panels to give greater baler density, yet also open when unloading the bale to prevent blockages.
Available with a choice of 2.2m wide RotoFlow or MaxiCut 13 or 25-knife pick-ups, it’s possible to produce bales from 80cm to 160cm and 80cm to 185cm respectively. The new pick-up also uses five rows of tines instead of the four used previously for better throughput and quality, says the company.