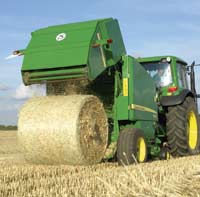 Looking to repair or renew the belt on your round baler?

West Yorkshire firm Benson Beltings says it has addressed customer confusion over exactly which type of fastener is used in different baler belts by putting a simple photographic ID chart on its website at www.benson-beltings.co.uk/beltdata/baler.htm

The chart can help farmers specify which fastener is in their existing baler belt, so that the same spec can be fitted by Bensons when supplying new belts or quoting for repair work.

Benson offers genuine-spec belts for all popular makes of baler and says farmers can save money by fitting inserts instead of having to buy new belts.