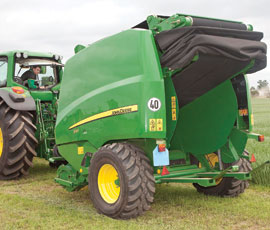 We asked farmers what piece of kit they thought was most interesting at Grassland and Muck 2011. A popular answer was John Deere’s new 900 range of balers, fitted with a curtain back and dramatically redesigned bale chamber.

There are a couple of test units on UK farms now, but they don’t go into production until spring 2012. Several farmers and contractors were keen to get their hands on one sooner, like Shropshire-based Ian Beavan.

“A neighbouring contractor was testing the prototype 960 with tractor-implement automation last year and sent one of his operators to help me bale oilseed rape straw one afternoon.”

“It was phenomenal. It was the first time I had been embarrassed when baling in nearly 30 years, especially as the operator had only been baling three years.”

Mr Beavan was so confident and impressed with the output of the 960 that he has put his name down for one of the first units. He bales in the region of 12,000 round bales and 12,000 square bales each season. “This will be my 15th John Deere round baler. I’m not even 100% sure of what this new model costs, but I have to have a machine that can deliver a good output in all conditions.”