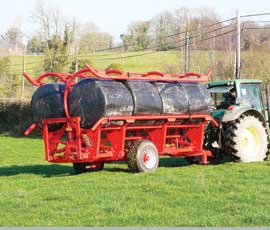 Shifting wrapped bales off the field is generally a pretty slow job, unless you’ve got lots of trailers and copious manpower. But Keltec’s self-loading bale transporter claims to be able to achieve high clearance rates with just one man and one machine.

The bale transporter was invented by Keltec boss Thomas Sheedy in Ireland several years ago. However, UK imports only started last year via UK importer Blakewell Services at Barnstaple, Devon.

There are two models: a single-axle eight-bale unit and a double-axle 10-bale one. Both use a pair of rotating cages to pick up each wrapped bale in turn. As the trailer approaches each bale, the cage on that side lifts up momentarily so that the new bale can butt up to the already-loaded ones. Then the cage comes down to pick up all the bales on that side, before moving to the next one.

Once the machine is full, the cages rotate fully inwards so that the bales all rest on a central area for transport. A safety lock also operates to give extra safety. Emptying the transporter simply involves putting the cages down and then driving forward.

To see the bale transporter in action, go to Keltec’s website

To see more grass machinery, see our feature on new grassland kit for 2013