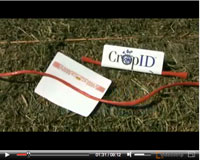 It’s a pretty innocuous looking thing – a small, white rectangular plastic tag attached to one of the strings of a big square bale.

Yet it represents something of a revolution in the way that hay and straw contractors and merchants can organise the storage and supply of bales, which at present is a broad-brush affair reliant on an expert eye, a good memory and, for most operators, hand-written records in a notebook.

But computer technology entering hay pastures this season could change all that with a system that records the field in which the bale was produced and when. It also monitors average and highest moisture content; whether any preservative has been used and, if so, how much and gives a good indication of the bale’s weight.

“It may be a little ahead of its time,” concedes Richard Snell founder and general manager of the Profitable Farming Company. “But I’m convinced professional operators will take up the system to improve inventory management and customer service – as well as meet likely demand for traceability of baled forage crops.”

The Tagger bale labelling system for big square bales devised by Harvest Technologies in the USA is an extension of the company’s Baler’s Choice automatic hay preservative system distributed in Britain by Mr Snell’s business.

The applicator’s HarvestTec control unit and in-cab display already records some of the information that goes on to the tag, such as moisture content, which is measured by a pair of star wheel sensors that also monitor baling speed to regulate the amount of preservative applied.

With the tagging system added, a data transmitter records this and other information to a radio frequency identification (RFID) microchip tag attached to one of the baler’s strings.

“Bale weight can also be included, either calculated from the pressure in the bale chamber or as an average of the previous three bales where an on-board weighing system is installed,” explains Richard Snell. “With a GPS system on the tractor, you can even record the precise location where the bale was made and use the data to calculate forage crop yields.”

When it comes to putting bales into storage or a consignment on to a truck, the information becomes a useful management tool for separating batches with different characteristics.

“Individual wet bales that could heat up and affect others in the stack can be segregated,” Mr Snell suggests. “Or you may simply want to store bales in groups according to moisture content or whether they have been treated with a preservative to suit different customer requirements.”

The details needed to make those decisions are picked up from the tag by an RFID reader. HarvestTec’s hand-held unit displays data on all tagged bales within a 9m (30ft) range, with entries for any tags that have been read previously showing up in red rather than blue.

It can also be used on a loader, with the reading pad separated from the hand-held display and located in a suitable position outside the cab, so that consignments that need to meet particular quality criteria can more easily be assembled.

“By setting alarms – for maximum moisture content, for example – the loader operator can separate any bales that don’t meet the required specification,” notes Mr Snell. “Also, if a buyer is doubtful about a bale, the tag data will show its moisture content at baling and whether it received a preservative treatment.”


Data generated on the baler unit and the reader can be saved to a memory stick for transfer to a spreadsheet on an office computer. This will provide a complete inventory record that can also be used to log customer shipments.

Mr Snell anticipates most interest from contractors and merchants operating in added-value markets – such as hay destined for horses or straw fuelling power station furnaces. In both cases, buyers have quite strict specification requirements.

“I suspect industrial use will drive the use of this technology, because at a power station, the data could be used to ensure a mix of bales of different moisture content to achieve optimum combustion efficiency,” he suggests.

Longer term, he sees potential for tagging to record the nutritional value of baled hay and silage, which is already possible on some forage harvesters, and to provide comprehensive traceability information.

“HarvestTec recently supplied 30 tagging systems to a very large farm in California exporting hay to dairy farmers in Japan. They want all the standard details on the tag, plus the GPS co-ordinates of where the bale was made and all the fertiliser and spray treatments used.”

At present, he points out, traceability records required by British supermarkets apply to grain and other compound feed ingredients, but not to the 80% of cattle feed provided by forage crops.

“It’s already required in Holland and will surely be required here in time,” he predicts.

Until then, contractors and merchants must weigh up whether any improvement in customer service or inventory management can justify the cost of the tagging system.

The tagger unit costs £4495 to work with the current HarvestTec 596 touch-screen control unit and auto preservative applicator, which itself costs around £6150. Upgrading a pre-2009 HarvestTec 496 is £2057.

The information processor can also be used with a bale moisture measurement system and tagger in the absence of a preservative applicator.