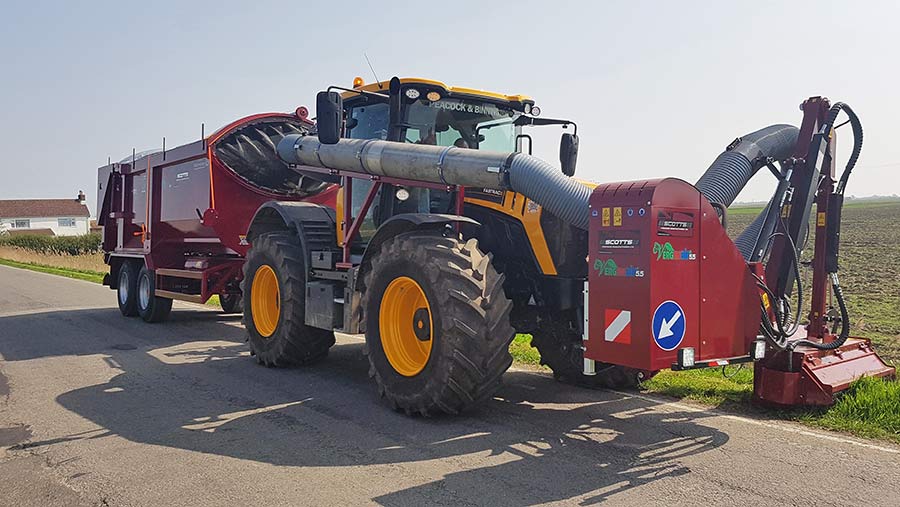 Running at 3-5kph, the Scotts Vergenair is no slower than a standard trimmer

Across Europe there are crops of maize, grass and cereals being grown specifically to fuel renewable energy plants.

While on the face of it this is good news for the environment and greenhouse gas emissions, there’s an argument that taking land out of food production for this purpose raises some moral questions.

There are a good number of anaerobic digesters consuming food waste as part of their diet, but these aren’t generally the mainstream agricultural set-ups, having to meet some stringent licensing requirements and needing some complex kit to pasteurise what goes in at the business end.

But could there be a compromise, with conventional farm-based set-ups supplementing their feedstocks with other biomass materials that more often going to waste?

Their aim is to scope out the opportunities for gathering material cut from the county’s roadsides and using it as a feedstock for biogas heat-and-power stations.

It was quickly identified that there was massive potential in the county, with more than 5,500 miles of rural highway.

It is estimated that Lincolnshire roadsides could produce enough biomass to provide electricity annually for up to 4,500 homes or gas for some 1,100 households. 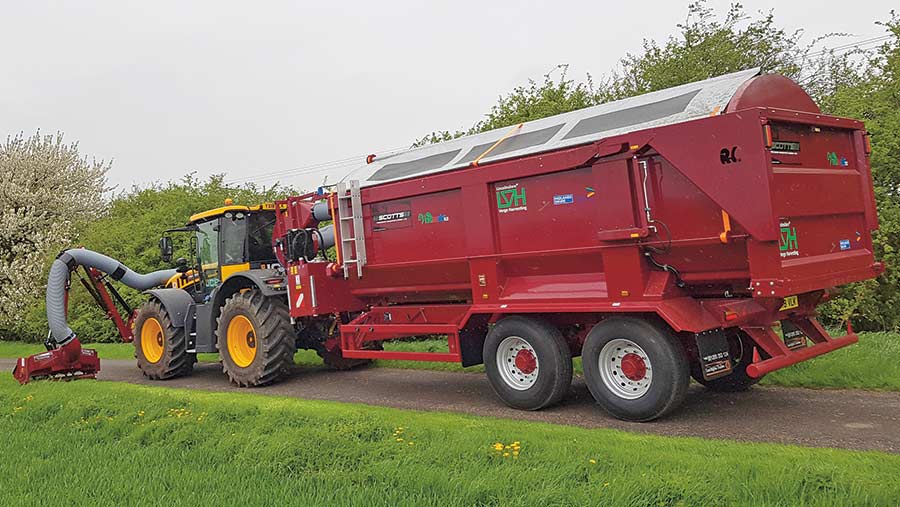 The Vergenair clears all mulched material from the roadside, allowing native grasses and flowering plants to flourish

But it’s not all about energy production. A cut-and-collect verge-mowing operation could also help to improve the biodiversity of the county’s highways borders by removing nutrient-rich plant residues, enabling native grasses and flowering plants to flourish.

Peakhill’s Dr Nick Cheffins says: “As well as producing energy from the trimmings we wanted to manage the verges much more like wildflower meadows, taking cuts off after the native plants have set seed and removing the material that often blankets them out when mulched.”

The scheme also stacks up from an accountant’s perspective.

With councils’ budgets across the country under pressure, the sums available for roadside trimming have been slashed, with the number of cuts per season reduced from four to three or even two in some cases.

While this presents certain safety issues regarding visibility, councils have had little choice.

But with the biomass collected from verges having a value as an AD plant feedstock, the financial burden could be reduced, potentially making verge-mowing a cost-neutral operation.

In its initial trial season the pilot project employed a monster Mastenbroek Herder self-propelled cut-and-collect machine to mow and gather verge growth, running back to an Orkel static round baler/wrapper.

This set-up worked well and allowed each bale to be sampled for nutrient analysis and contaminants, but having to run the big harvesting rig back to the baler every time the body was full made the operation innately inefficient.

“In that first season we proved that the concept worked – the silage from the verges had surprisingly low levels of pollutants and the energy yield was broadly what you’d expect from permanent pasture,” Dr Cheffins says.

“But to make it a commercially viable proposition we had to improve the efficiency of the harvesting operation.” 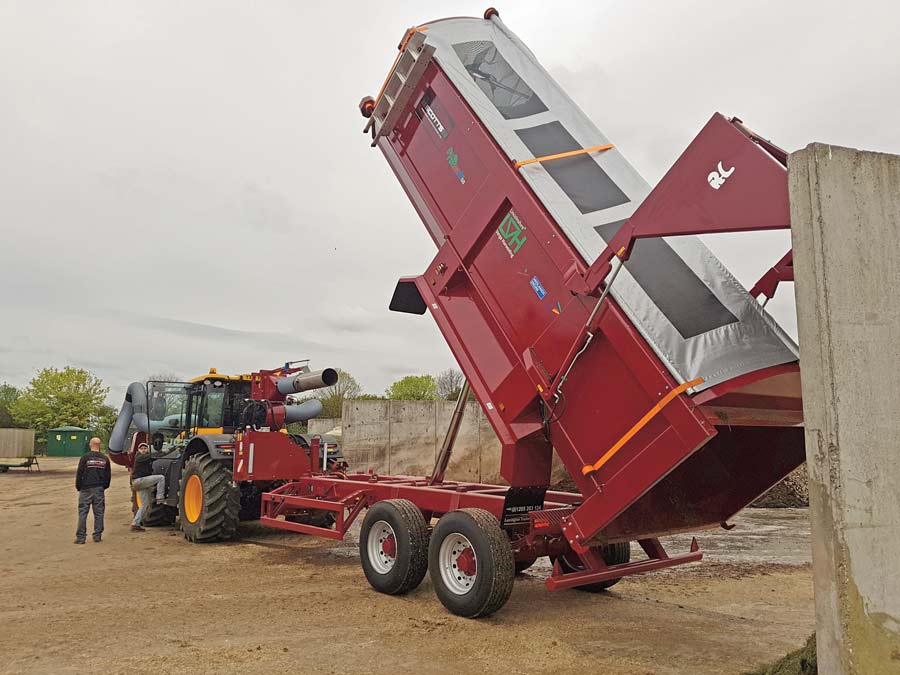 Machinery manufacturers were invited to tender to build a cut-and-collect machine capable of harvesting the roadside growth in a cost-effective way.

The only major stipulation was that it should be a wrap-around rig that could be de-mounted from the tractor, enabling the prime-mover to be used for other purposes in the off season.

After careful consideration of the various proposals, the group settled on Scotts Precision Manufacturing as its chosen engineering supplier.

Managing director Derek Scott says: “We’re more used to working on potato machinery, so when we were approached to come up with a design for a verge-harvesting rig it required a bit of alternative thinking.

“The first thing that I was certain of was that the mower arm should be front-mounted to make visibility as good as possible for the operator.

“My other major design criteria was that the trimmer tractor should tow an easily dropped collection trailer so that it could be quickly swapped for an empty one, enabling it to keep cutting rather than running back to the silage clamp.

“That was the clear inefficiency in the self-propelled machine used in the pilot trial.”

With a front-mounted trimmer and a collector trailer decided upon, it was then a case of selecting the right tractor to go in the middle and working out how to get the material from the front to the back.

By the nature of the job quite a bit of roadwork would be required, so a high-speed tractor seemed sensible. While other makes were considered, the obvious choice was a JCB Fastrac.

“Speed and comfort were the plus-points of the Fastrac but the new 4000s had the additional advantage of a stepless CVT gearbox, which is ideal for trimming work,” explains Mr Scott.

“On top of that they’ve got four-wheel steering which makes them really manoeuvrable and, with the mid-mounted cab, visibility is superb.

“The other big bonus is having that space on the rear load deck – it’s the ideal place to mount a big hydraulically-powered sucker-blower.” 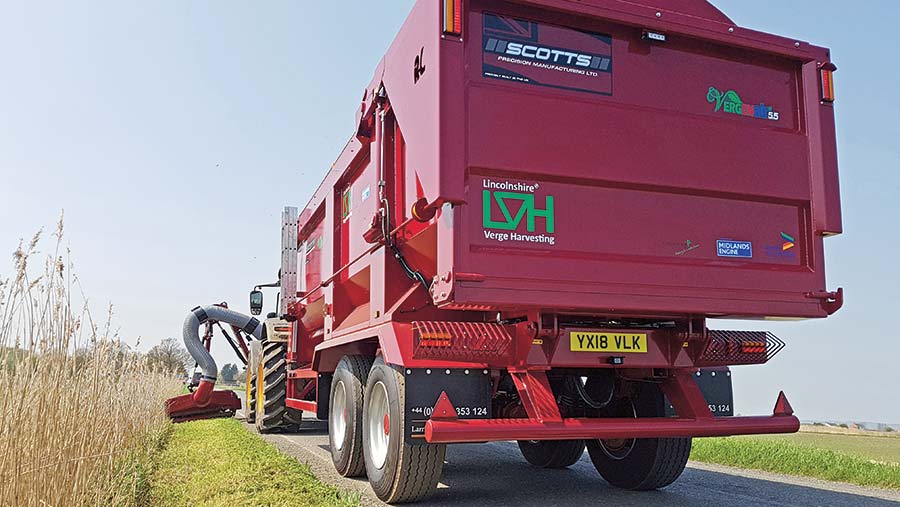 A big length of hose linked to a serious fan was decided on as the best way of transferring cut material from front to back, but the nature of a detachable trailer meant this would require some careful planning to make it work.

With Lincolnshire trailer maker Richard Larrington not far away from Scotts’ HQ, he was asked to come up with a bespoke design to suit the job.

The point at which the big-bore pipe enters the trailer headboard took a bit of careful consideration.

To fill the trailer to capacity from the back forwards the pipe needs to be blowing down the length of the body as straight as possible, irrespective of the angle of the tractor to the trailer.

This required  a clever swivel arrangement but it couldn’t be too complex as it needed to be quickly disconnected every time the trailers were swapped.

The solution was a big sock set into the headboard and a bungee to secure it in place.

The next challenge was in reliably propelling material up the pipe as plant growth varied through the season.

Mr Scott said: “We had settled on a 5.5m-reach Tifermec trimmer with 1.1m flail head as it’s an off-the-shelf front-mounted machine that we knew could do the job with a few modifications.

“Tifermec is a small yet well-established Italian trimmer manufacturer with a very similar attitude to our own – they’re flexible in how they approach the design process but are completely focused on producing quality kit.

“But the big challenge was getting the cut material out the back of the head and up through the suction pipe.

“Because quite often in early summer you’re dealing with some quite lush, wet growth – like cow parlsey – it’s not easily blown.

We fitted an auger arrangement behind the flail to draw material across to the opening but it took quite a bit of trial and error to get it right.”

But with a few modifications it was soon up and running at 3-5kph, picking up in excess of 30t a day.

While this may not seem a staggering quantity, with the rig running for three to four months of the year it could generate up to 3,000 tonnes of material, substituting for a similar amount of purpose-grown grass from farmland.

There has been another unexpected benefit of the Italian-built Tifermec trimmer. Because the Y-flails fitted as standard don’t tend to create too much of a vacuum effect,.

The amount of consumer plastic waste sucked up with the verge trimmings is kept to a minimum, reducing the levels of contamination in the final feedstock.

The 2018 trial proved a resounding success for Lincolnshire Verge Harvesting.

It has attracted significant interest from local authorities around the country looking to draw on the benefits of improved biodiversity, sustainability for AD plant feedstock production and reduced costs for verge vegetation control.

But there’s still one big stumbling block – the way the Environment Agency classifies the material gathered from the roadsides.

At present most of the 500-odd rural biogas plants dotted around the country work under a simple licensing system which dictates that they don’t use any form of waste-stream as a feedstock.  Going down that route requires a whole stack more paperwork and regulation.

The verge harvesting crew is currently in negotiations with the EA, arguing that the harvested material is a feedstock rather than a waste-stream. Hopefully common-sense will prevail.

Although the Scotts Vergenair has proved itself to work, 2019 will be another year of testing and analysis before the scheme becomes more widespread.

“We’re hoping we’ll see an upscale of the verge-harvesting concept throughout the UK and then beyond,” says Mr Scott.

“The system we have developed offers really good value for money compared to what has gone before. It’s a simple, commonsense approach that is very farmer friendly.

“We are currently going through a significant expansion of the business premises which in time will allow us to bring more of the outsourced verge harvester components back in house should we wish to do so.

“The winter months have historically been a quiet time for the business and so the project fits well with most machinery being required for a spring delivery.” 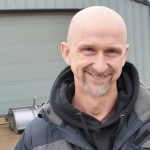 Based close to Boston in Lincolnshire, Scotts Precision Manufacturing is positioned in the heart of potato country.

And that’s what the company specialises in, building soil and haulm separators for grading lines and harvesters as well as tuber and bulb wind-rowers and haulm toppers.

With the ban on Diquat for use as a dessicant, it is that last product range that’s recently come to the fore and in recent months Scotts has seen demand for its single and triple toppers leap massively.