Claas has added six new disc mower models to its range. One of them, the Disco 1100C Business, is claimed to be the widest mounted mower combi on the market thanks to its 10.3m working width. 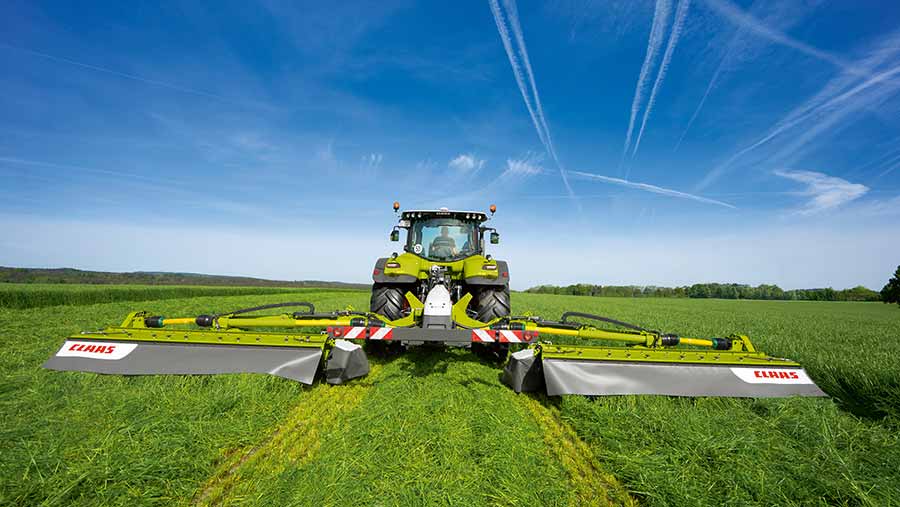 The two rear mower units on the Disco 1100C Business are mounted on telescopic arms that allow the working width to be altered from 9.40m up to 10.30m when used in combination with a 3m-wide Disco 3200 Profil front mower.

This variable working width allows for a greater overlap on the front mower for working across hills or when turning around corners and then reducing the overlap when working in straight lines.

For transport, the telescopic arms can be folded down to below 4m in height and 3m in width and the mower units are hydraulically locked and unlocked. For storage the 1100C can be folded up to save space.

Both mower units incorporate a non-stop hydraulic breakback protection system as standard and the adjustable Active Float mower bar suspension system. The spec for the 1100C also includes hydraulically folded protective covers, full disc speed monitoring and if required the pto speed can be reduced from 1,000rpm to 850rpm in lighter crops to save fuel.

It is also fully Isobus-compliant, so can be set up and controlled using any Isobus terminal, such as the Claas Communicator and S10 steering terminal, or now also via an iPad using the new Easy on Board app.