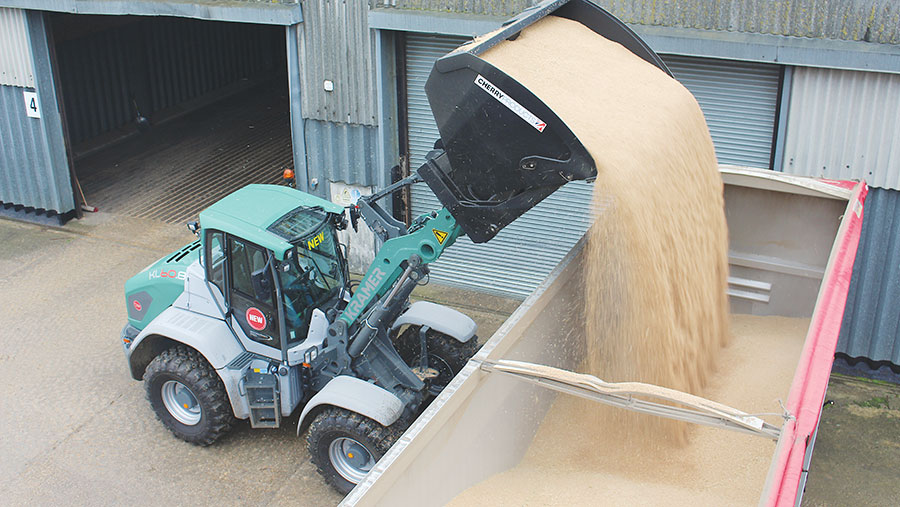 That might make it sound like the ultimate farm handler, but it comes with a couple of catches – a high price and limited reach.

Launched more than two years ago, the 60.8 is the second-biggest shovel the company makes.

Its novel design is an attempt to pinch some sales from telehandler and bend-in-the-middle loyalists alike, with the latter a market Kramer openly admits it is missing out on.

The machine’s obvious weakness is the lack of a telescopic boom, which limits lift height to that of a loader tractor and generally reduces its skillset compared with comparatively sized telehandlers.

However, the company seems to have rectified that particular issue, having revealed a new extendable boom version at Agritechnica (see “KL55.8T”).

That, it hopes, will put it in a stronger position to compete with telehandlers, which continue to enjoy the lion’s share of the 3,600-unit-a-year loader market.

There isn’t much to rival their ability to sneak into tight grain stores or negotiate snug feed passages, but the KL can match both their turning circle and lift capacity.

So, where does the current model fit in? Is it trying too hard to please all parties or has it nailed the all-round appeal to turn heads in all three categories? 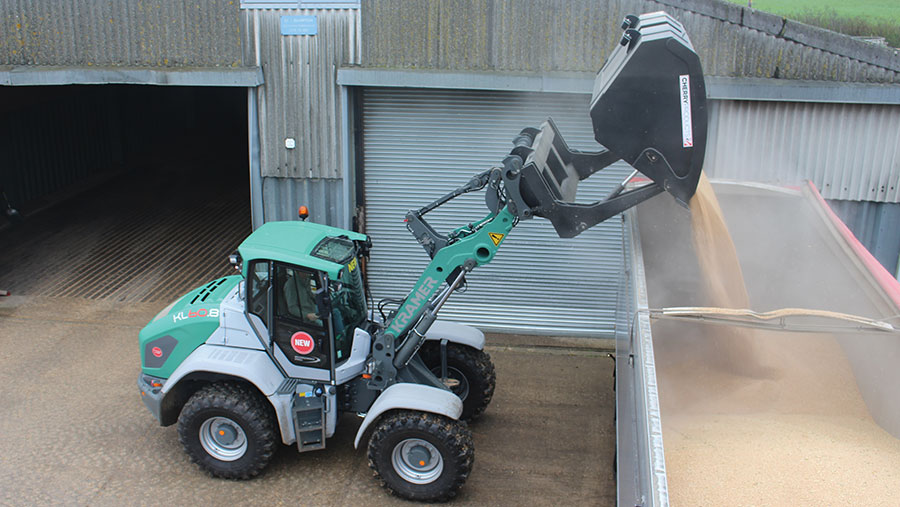 If you have owned or driven a Kramer telehandler before, the driveline details will make for pretty familiar viewing.

The engine is the same 4.1-litre, four-cylinder Deutz unit used in a majority of the firm’s large-bodied telehandlers, while the axles – built by Carraro in Italy – are also used on the same machines.

The Eco Speed Pro hydrostatic transmission is made by GKN and the three-ranges are easily changed on the move using joystick buttons.

We found that at the top end of the 40kph road speed, the transmission whines loudly, even with the firm’s Smart Driving system taking the engine rpm down to just 1,550 at 40kph.

There’s a distinct lack of guts when climbing challenging hills, too.

That said, the silky-smooth delivery of drive means there is no jerking between the three ranges and the relatively intelligent gearbox monitors the drive to get a decent balance of grip and fuel consumption.

The advantage of having relatively few gears is that there is no shifting when driving to and from the store with grain in the bucket, nor when barrelling into a heap, which helps keep tidying up to a minimum.

In terms of controls, it’s quite similar to a pivot-steer, particularly with the foot pedal arrangement that sees the brake controlled by the driver’s left foot.

One clever feature is the parking brake release, which can either be disengaged by a button or released automatically by pressing the brake pedal and engaging the gear at the same time.

Maintenance tasks are made pretty easy, too, with an optional auto greaser on our test model.

Diesel and AdBlue fillers are mounted together on one side and there is also a detachable ladder on the offside of the machine.

This can be hooked into holes on each rear corner to allow easy access up to the engine bay – it’s a mountainous climb without them.

The cab is a veritable living room compared with equivalent telehandlers, and three steps lead to wide door access.

The view is supreme, offering vision all around, and a reversing camera on the screen is handy for hooking on trailers or getting cosy with grain store walling.

Though not having a telescopic boom is obviously a major downside, it means there is nothing to restrict forward visibility. 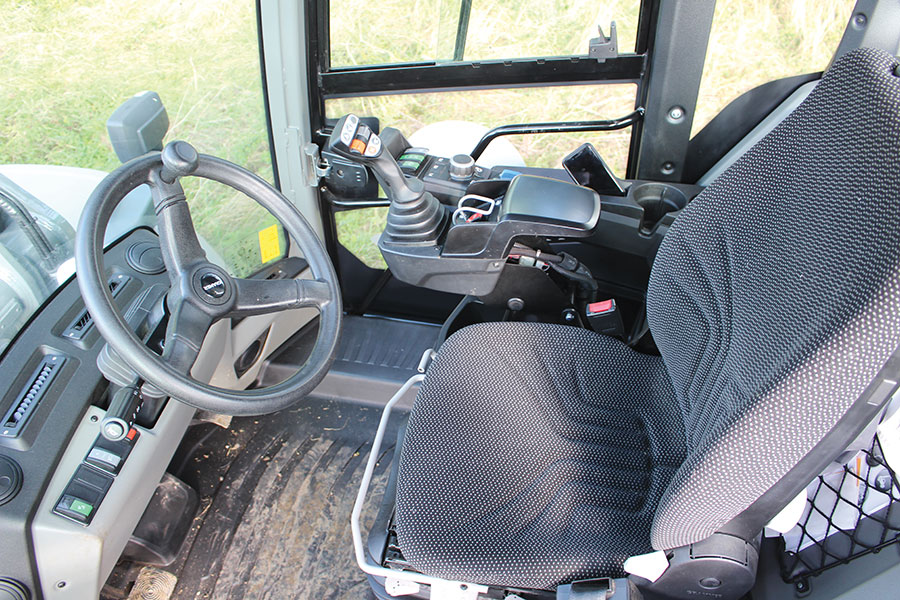 The joystick hasn’t changed much from the version used in Claas’ Scorpion handlers (previously built by Kramer).

It is well laid out, with the transmission speeds and F/R shuttle accessible without drivers having to contort their hand in all directions.

There is also a neat third service diverter button that has to be held to engage and means that accidentally unlocking the attachment pins isn’t possible.

A simple 7in screen is mounted high out the way.

It displays major fluid levels from the main run screen and there are three function buttons that correspond to customisable slots, each offering different readouts and setting tweaks, such as joystick sensitivity and hydraulic flow.

The boom uses a PZ linkage, which is more suited to clamp work and generates a tear-out force of 6,300kg.

As a means of comparison, that puts it slightly ahead of JCB’s market-leading pivot-steer – the TM320S – at 6,260kg, but a little way behind  the 6,863kg of Manitou’s biggest MLA-T.

However, the lack of a telescopic function means bucket dumping height is just 2,725mm, so you’ll need a fancy toe-tip bucket to load a grain lorry.

The Cherry Products 2.6t version we used is £9,528 and should probably be factored into the cost of the machine.

These are certainly the easiest way of gaining a few extra height centimeters when loading lorries, but can take a bit of getting used to. 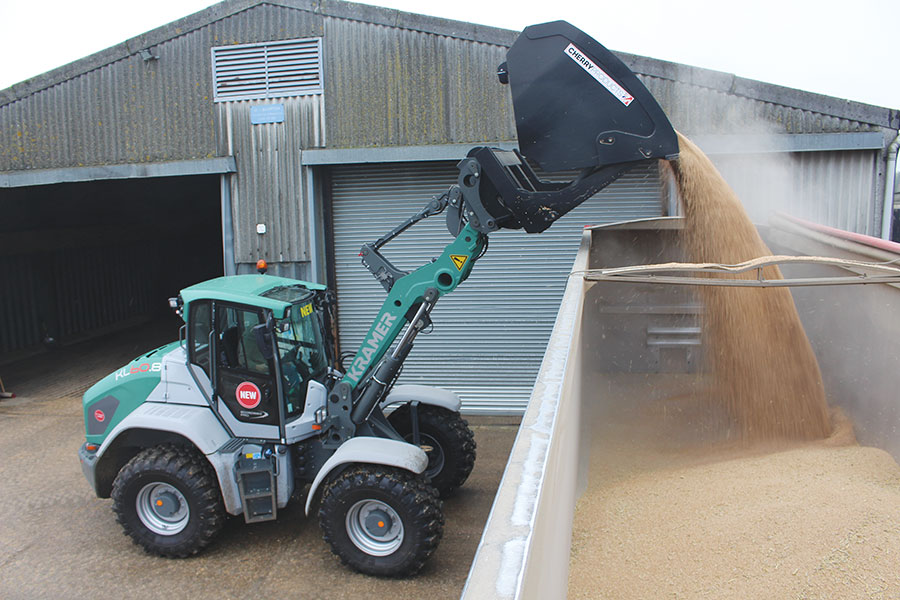 Similarly, total lift height is 3,605mm with pallet forks, so it falls predictably short of its rivals – the latest JCB 541-70 telehandler reaches to 7m and Manitou’s bendy MLA will stretch to 5.2m.

The Kramer isn’t particularly useful when it comes to filling hard-to-reach hoppers on big drills.

The standard hydraulic pump kicks out 150 litres/min, but our test unit was fitted with the £446 optional 180-litres/min setup.

This gave us a bit more grunt when loading a steady stream of lorries and was never wanting for power on lift cycles.

Kramer also fits a return-to-position system for the loader, which is handy for repetitive tasks.

Why go for four-wheel steer?

The company’s decision to build an all-wheel-steer machine rather than an articulated version boils down to its constant payload philosophy.

In simple terms, it means that at any steering angle, the centre of gravity is fixed in the middle of the machine, so the KL’s payload of 4,200kg is true, no matter how tight the wheels are turned.

This differs from bend-in-the-middle handlers that shift their centre of gravity when at full lock, thus reducing the payload.

And the turning circle is significantly better, too – it will turn in 7.7m, which is a metre better than Manitou’s MLA and matches that of most telehandlers on the market.

The big central cab, three steering modes and hydrostatic transmission provides the base of a great machine, but it feels pretty large in small grain stores and has a depressing lack of power on the road.

The lack of a telescopic boom will be a major issue for most buyers, butwith the launch of the KL55.8T at Agritechnica last year, this issue may have been solved.

That factor may well interest of more farmers, but they’ll also have to negotiate a good deal to land it at a competitive price, as most of its competitor machines retail at a much lower price point.

No sooner was the KL60.8 launched than a new model was on the horizon in the form of a telescopic version.

Released at Agritechnica 2019, the KL55.8T is a mirror image of the one we tested, with the only exception being a telescopic boom that extends the lift height to 5.4m – the same ball-park figure as Manitou’s MLA at 5.4m.