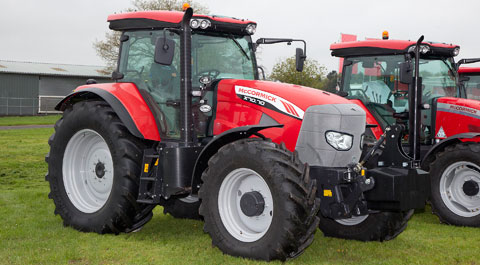 Other than a new name-tag, the key difference is in the engine department. Although a 6.7-litre Fiat-Iveco is still employed, it is now an AdBlue-equipped unit which is promised to be ‘leaner and greener.’ Performance is also improved too with greater max power and torque figures than the previous models.

Things have changed up in the cab too. Gone are the roof-mounted heater/blower controls, improving headroom and allowing a roof window to be fitted. With the air-con switchgear moved to the rear cab pillar, it’s a final move away from the Case MX products that these bigger McCormicks are descended from.

On the transmission front things remain the same as before with a choice of either a four-range mechanical box with eight powershift steps or the top-spec version with powered range changes allowing clutch-less shifting through all the ratios. Both provide 32 forward speeds and 24 in reverse.

Set to become available from July the new tractors are expected to be £5500-£6000 more expensive than their predecessors. Most of that extra cost is put down to the extra jiggery-pokery required to make the engine comply with the latest emissions rules.