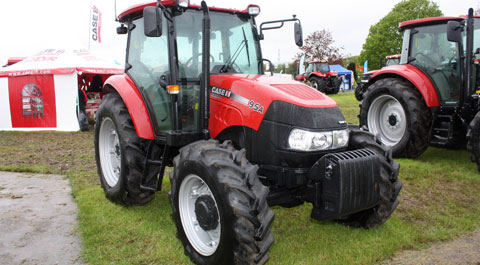 Case’s smallest tractors have been revamped and re-branded. Anything up to 115hp is now tagged with the Farmall badge with three ranges under that umbrella: basic-spec A models, mid-range Cs and top-end Farmall Us.

The most sophisticated U versions run from 95hp to 115hp and have a 24F x 24R transmission with power-shuttle and clutchless splitter.

The 55hp to 75hp Farmall C line-up gets a 12F x 12R all mechanical box while A models have the option of either mechanical or power-shuttle. They run right through from 55hp to 115hp.

All models gain a new cabin with sleek roofline and sweeping curves. Those over 85hp are built at CNH’s Jesi plant in Italy while the smaller models are made under a joint venture agreement with Turkish tractor manufacturer Koc.

In their most basic Farmyard spec, Farmall As are kitted out with a 30kph transmission, mechanical shuttle, single-speed pto and mechanically-engaged 4wd. This rock-bottom, simple spec generally knocks about £2,000 off the list price of a standard model with the result that a Farmall 115A comes in at about £37,000.