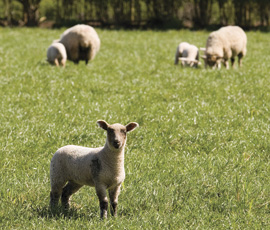 That’s the difference well-managed grassland can make to a beef or sheep farmer, according to EBLEX. The first year’s results of GrassWatch, an EBLEX initiative run in association with Farmers Weekly, have been analysed and the project is set to start again in March for 2011.

Last year, 10 college farms across England monitored grass growth throughout the season. The results were posted on FWi (www.fwi.co.uk/grasswatch), giving beef and sheep producers a true idea of the potential that often lies untapped in England’s pastures.

“It’s the first time we’ve been able to estimate yields off beef and sheep pasture,” says EBLEX scientist Liz Genever. “It shows higher input beef and sheep farmers can achieve higher yields. If you have the right leys and manage them correctly, there’s no reason why you shouldn’t get as much as 12t/ha DM off them.”

This impressive yield was achieved by the University of Cumbria. But the spread was vast, with the lowest estimated yield just 0.8t/ha DM on the South Downs at Plumpton College. The average of all fields was 5.5t/ha DM, while yields over 10t/ha DM would be expected in dairy systems.

Conventional re-seeded pasture yielded the most, but the difference over permanent pasture was not as great as Dr Genever had expected.

“It tells us two things. First, re-seeds must be managed properly to yield well. Second, these good figures for permanent pasture dispel the myth that it can’t produce the quality of a re-seed if managed well.”

The organic pastures that were monitored, both the re-seeds and permanent pastures, yielded the lowest. “Theoretically, organic leys should yield as well as conventional. But in this project they were all on the drier farms, so it’s probably an issue of weather,” says Dr Genever.

But there are some basic factors beef and sheep farmers are failing on. Results from a total of 30 fields across the college farms revealed the dismal truth regarding soil analysis – only seven had a perfect pH (6-6.5). Seventeen per cent and 43% of the fields were below optimum for phosphate (P) and potash (K) respectively.

“You’ll never achieve a good yield from grass if P and K are low, as root growth and nutrient uptake will be affected. DEFRA figures show that only 27% of LFA and 37% of lowland grazing farms regularly test their soils, compared to 94% of arable farms.” Allowing pH to fall to 5-5.5 will reduce grass yields by 9%.

White clover content is related to P and K levels – it needs indices of 2 for optimum establishment and growth. Kingston Maurward College had the highest levels of white clover, and this is linked to its perfect P and K indices.

“White clover has the potential of boosting outputs while reducing inputs – with rising nitrogen prices, it is an easy way to boost production. The target should be an annual average of 30% of dry matter being white clover. GrassWatch monitoring found that 75% of the samples taken in the fields across the season had less than 10% white clover.”

The college farms used plate meters to monitor grass cover. These have been used extensively in the dairy industry, but this was the first time they were used on typical beef and sheep pastures.

Many of the graphs show grass growth up to silaging, and then management of grazing afterwards. In a number of fields, plate meter readings showed levels above the 2800kg/ha DM optimum (about 12cm grass height).

“Grass usage is key to grazing efficiency. Let swards grow too long and you waste growth. If you set grazing targets using a plate meter or sward stick, you will improve usage.” Currently, the average usage in the UK is about 50% of grass grown, while in New Zealand it is about 66%.

Quality capture the aim at moreton

With an ME content above 12MJ/kg, it’s the consistent high quality of its pasture that has taken Moreton Morrell College in Warwickshire by surprise.

“The study has got us on our hands and knees studying the grass and we now have a lot of information we have never had before,” says college farm manager Jonathan Clarke.

“It’s making us value the grass a lot more. If the next year’s results match up to 2010 in terms of quality, we will need to recognise grass growing as a real strength of this farm and maximise it for the future.” 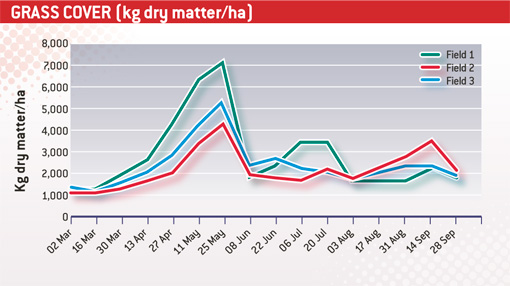 Mr Clarke is keen to assess whether this is down to variety or some other factor. Permanent pasture actually yielded better than re-seeds, although the re-seeds had better D-value. Capturing this quality in the silage will be one of the main aims for 2011.

“It’s a question of making sure we can keep on top of grass growth through April and May so that we can maintain the quality.”

The monitoring showed up the summer’s dry spell all too clearly. “Once the grass stopped growing, it was surprising just how quickly they stripped off a field. You have to manage it carefully to stop it affecting beef and lamb growth.”

This year, targets will be established to monitor grazing management: