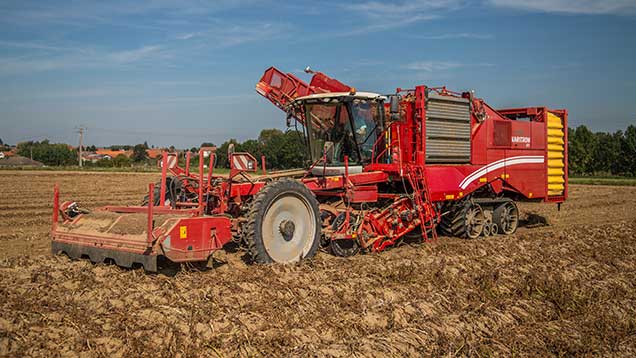 In the second of our new series on how the world’s biggest machinery makers began life in very modest surroundings, we look back at Grimme.

When Franz Grimme started the business in Damme, Germany, in 1861, he was the local blacksmith making simple tools and doing repair work.

The business expanded after his son, also called Franz, took over in 1899 and built up the machinery activities for local farms.

The emphasis on machinery continued when the next generation – another Franz – took over the company in 1932.

This was also the stage when designing and making farm machines became an important part of the Grimme family business.

Production was on a small scale initially and the first machines were probably one-off designs built to meet the needs of individual farmers.

But this situation changed in 1936 when the company built a new machine that would sell in large numbers.

The new machine was called the Unerreicht – which means Unrivalled – and it was a significant development for Grimme.

It was an important stage in the company’s progress from blacksmith’s forge to machinery manufacturer, and it was also significant because the new machine was a combined spinner-and-windrower for harvesting potatoes, and this provided an early indication of the company’s future product development.

The production total for the potato spinner/windrower reached well over 1,000 machines during three years, and during this time it was joined by a second machine, called the Komet, which was a potato spinner without the windrowing attachment.

Both machines were designed for pulling by horses, although a small number may have been adapted to work with a tractor.

With the success of these 1930s machines establishing Grimme as a potato machinery specialist, they were followed in 1945 by a wheel-type potato digger combined with a windrower.

This would also have been built mostly for working with horses, plus a small number with tractor drawbars.

With tractors becoming increasingly available on farms in the 1950s, Grimme built its first pto-driven spinner/windrower in 1955, and this was followed by the Universal potato harvester in 1956 – a tractor-powered trailed harvester that was a major breakthrough for the company.

It was the Universal that provided Grimme with its first major export success, beginning with sales to the Netherlands.

It was also the start of a period of rapid growth, with employee numbers increasing from 70 when the Universal was first launched to 240 in just 11 years.

Grimme’s success at this time also included taking the lead as Germany’s biggest-selling potato harvester manufacturer with a 62% market share.

The next big development came in 1969 when Grimme developed the world’s first self-propelled potato harvester.

It was a single-row machine based on a Deutz tractor with a long chain drive to the rear axle of the harvester, and when it was shown at the 1970 DLG event in Germany it attracted international interest.

It was followed in 1974 by a two-row, self-propelled potato harvester – also a world first – with advanced features including a hydrostatic transmission offering the advantage of infinitely variable forward speed adjustment.

The self-propelled two-row model included a 3.5t capacity bunker and the design avoided wheel contact with the unlifted rows.

By the early 1970s, export success was making a major contribution to Grimme’s growth, accounting for 60% of the 1973 production total, and the UK was emerging as one of the most important overseas markets.

An important development during the 1980s was designing potato harvesters that could also be adapted for lifting other root crops, and this started in 1982 with the two-row DL1500 model and its DR1500 bunker version, which also harvested carrots.

By 1987, the range included windrowing machines and toppers in two and four-row formats with the versatility to handle a wide range of crops including red beet, swedes, onions and chicory as well as potatoes.

Sugar beet was added to the list of crops in 2003 when the new Maxtron six-row, self-propelled harvester was announced with an advanced design that won two silver medals and the 2004 Machine of the Year award.

A major expansion into vegetable crop harvesting machinery began in 2013 when Grimme bought the ASA-Lift company, a specialist manufacturer based in Denmark.

Other developments that took place after 1980 – the year the Grimme family’s fourth generation – yet another Franz – took control – included the start of the company’s in-house electronics research and development activity.

One of the first results was adapting the recently introduced Cambus control system for use in potato harvesters.

Grimme was one of the first farm machinery companies to offer this type of control system on farm machinery, and its first Cambus-equipped harvester was the GZ model in 1988.

In 1995, Grimme developed the electronics and software for the first digitally controlled potato harvester.

Grimme formed Internorm in 1987, a subsidiary specialising in making plastic products for use in agricultural and construction machinery, and a marketing arrangement that started in 1993 with Grimme selling Gruse potato planters and ridgers.

Another addition to the Grimme group came in 1993 when the Ricon subsidiary was formed as a specialist manufacturer of webs for Grimme machines.

With harvesters and other field machinery for potatoes well established, a further development starting in 1999 added potato handling and storage equipment to the Grimme product range.

Machines such as box handlers, conveyors, elevators and reception hoppers now account for about 15% of total Grimme group turnover.

An important factor in the success story has been overseas sales expansion, with Grimme machines currently selling in 120 countries worldwide, and this has been helped by establishing company-owned sales, service and parts supply operations in many of the most important markets.

Grimme UK was established in 1993 in Lincolnshire and currently supplies 70-80 harvesters a year to British growers to achieve an estimated 75-80% market share.

Grimme took over their existing Canadian distributor in 1999, and in 2003 the Spudnik company – located in Idaho, the US’ principal potato-growing state – became a wholly-owned Grimme company.

Spudnik, which was previously owned jointly with a US company, is a manufacturing and marketing operation that employs more than 250 people and supplies harvesters to the US and Canadian markets.

The most recent overseas expansion came in 2011 when Grimme China started trading, assembling and distributing harvesters to the Chinese market.