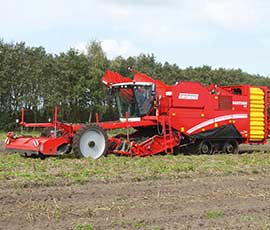 Grimme has introduced its flagship Varitron 470 four-row self-propelled potato harvester to the UK.

One machine has been undergoing testing in East Anglia, while another has already been sold for red beet harvesting.

The width of the intake web, at 2,970mm, is maintained throughout the first and second main webs to reduce bottlenecks and damage to tubers.

Separation is based on Grimme’s well-established Multi-Sep technology and the holding bunker takes seven tonnes.

Tyres on the rear are available, but Grimme expects all buyers in the UK to opt for the twin 900mm tracks to support the 34t fully-laden weight. The Mercedes 490hp engine is Tier IV compliant through the use of AdBlue.

At £525,000 the machine represents a serious financial investment. However, the company points out that recent wet autumns and soil damage are increasingly prompting growers to try to avoid harvesting into late November.

The UK market for self-propelled harvesters, about 50 units a year, may be specialised, but it is competitive.

De Wulf (sold by Niagri Engineering at Thetford) has reported a record sales year for its two-row machine, while fellow Belgian maker AVR is now operating in the UK through four dealers.