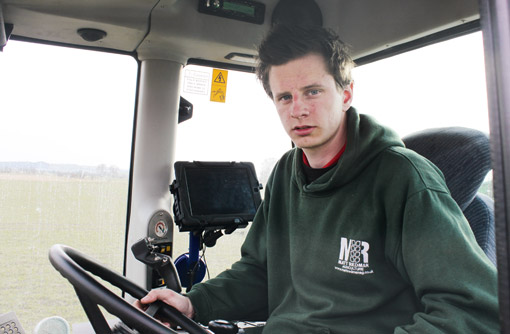 Matt Redman operates an agricultural contracting business and helps out on the family farm in Bedfordshire. So keeping up to date with everything in the industry is key and something he has thrived to do. “I mainly use the iPad for the Gatekeeper web app – for filling in spray records. But I also use it to look up product guides.”

Mr Redman owns both an iPhone and an iPad and believes he has come up with a simple and effective method of installing his tablet into any vehicle.

At the heart of Mr Redman’s setup is the holder itself – a RAM Tough Tray II tablet holder (pictured). This is fixed with a RAM 1.5in rubber ball mount, which connects to a RAM double socket arm.

To ensure the mount works in any vehicle, Mr Redman opted for a glass mounted approach using a sucker designed for carrying glass (bought from the B&Q DIY store) which has the other RAM 1.5in rubber ball mount attached to it.

“I simply bolted one of the RAM ball mounts to a flat piece of steel, and then bolted this to the B&Q sucker,” he says.

“It’s a bit big, but it is hidden behind the holder and has been stuck to the bottom of the sprayer cab window since September and hasn’t fallen off yet, even when spraying on rough subsoiled or ploughed ground.”

The device also has the ability to stick to the curved panoramic doors of tractors providing a quick, and easy way of transferring between tractors that might not necessarily have a “bolted” holder location.

“It also allows it to be mounted in a variety of places to fit around other implement boxes or keep it out of the way, the RAM ball mount allows the holder to be adjusted to almost any angle as well,” he explains. 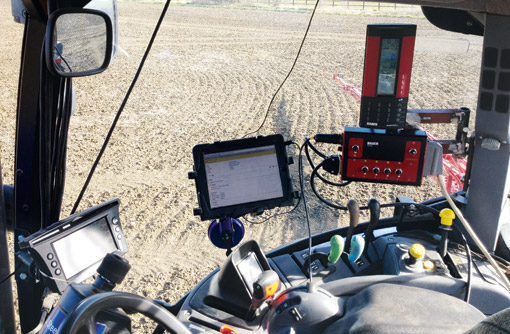 Mr Redman says he opted for the “tough tray 2” holder as it is a more universal holder than the iPad specific one.

“I felt this would be better to hold my iPad when in a case – I have since had it in a leather flip over case, an Otterbox and currently a Griffin Survivor case – the Griffin is by far the best out of the three,” he says.

While the RAM mounts aren’t cheap, they provide an almost infinitely adjustable bracket, and mean that the DIY glass sucker can also be used to hold other bits of kit. Mr Redman has also used it hold a Trimble Ez-guide 500 GPS display.

There will be a number of other systems available to farmers, but Mr Redman urges those looking to build their own not to be afraid to spend a bit of money.

“Considering the cost of the iPad, it’s worth spending a little extra for a good bracket and holder. It’s cheaper than watching it bounce around the cab on a rough tramline or farm track,” adds Mr Redman.