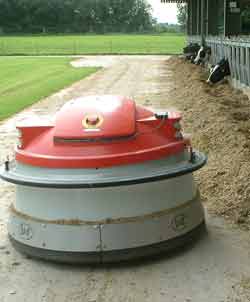 A budget of £2.3m for a Shropshire college’s new parlour and milk plant sounds like a lot of money, but economies still had to be made, explains Simon Wragg

The tough commercial reality for many dairy farmers over the past few years has been a gradual but relentless tightening of milk margins. And that same trend influenced Harper Adams University College’s thinking when it came to replacing its dated 180-cow unit with a modern, greenfield 400-cow enterprise.

Scott Kirby, HAUC farm manager, says tighter milk margins meant some of the expenditure on machinery and fixtures for the new build had to be shelved. “Since we started looking seriously at a new unit in 2006, the milk price has come down and all the other costs have gone the other way,” he says.

The £2.3m budget was set at roughly £5500/cow place but there was little latitude to extend borrowing, a situation common to commercial dairy farms. “Capital costs have been saved, such as employing one main contractor, Minshall Construction, to do the main groundworks and erect the buildings,” he adds.

But it is in the arena of labour-saving machinery that capital has been invested with greatest effect.

At the business end of the unit, a 40-point internal rotary parlour (internal meaning staff stand on the inside of the rotating milking platform) was chosen over an in-line rapid exit design. “It was felt a rapid exit would take too long to get cows in and the ability to view cows during milking wasn’t as good,” explains Mr Kirby.

At roughly £200,000 for the parlour infrastructure alone, it was the second-highest cost in the project, exceeded only by the dairy cows themselves at about £2000 each.

Investment has also been made in installing a gantry-style backing gate in the collection yard to keep cows moving towards the parlour. “It is not electrified on welfare grounds, but staff have a video link within the parlour to help control cow-flow.”

Other video links cover walkways and cow accommodation and are partly for educational use. However, the drive has been to allow staff to stay in the parlour during milking, limiting the risk of interrupting cow flow.

The latest cow clusters have been fitted to all 40 milking points on the rotating parlour. They opted for GEA’s iQ cluster (costing roughly £295 apiece) to cut cross- contamination between individual quarters of the cow’s udder and thereby reduce the risk of mastitis – a major cost in terms of both cow discomfort and lost production.

A back-flush system that ejects milk using both air and water from teat cups between each cow has also been fitted to improve cow health. This alone would cost about £20,000 to retrofit, according to the manufacturer’s figures, but should prove to be a prudent investment.

There’s also been a big investment in energy-saving technologies to reduce parlour running costs. A variable-speed vacuum pumping system has been installed, with sensors monitoring pressure as close to the milking point as possible.

This should reduce energy consumption by a staggering 70% – a worthwhile amount given that many parlours put in at least eight hours working time every day.

Some investments are still under review. With long feed barriers around the two cow yards, ensuring the feed is kept fresh throughout the day is important and can have an impact on milk production.

“We have an automated system on trial currently and will see how it performs before committing fully,” says Mr Kirby.

The Lely Juno being tried costs £12,000, self-docks to recharge its internal batteries, and can run 24 hours a day, seven days a week. It replaces the need for a tractor and driver to physically push up the feed that cows nose out from feed fences.

“It can run at night when it’s not practical to have staff on-site but it’s one of those investments which takes time to see how it’ll work out.”

Other less high-tech feed-related equipment has been fitted too. Self-locking yokes have been installed on feed fences, allowing staff to carry out visual inspections and day-to-day health checks on cows during feeding without the need to sort stock from cubicles.

But not all plans have come to fruition. Putting rubberised flooring on key walkways would potentially improve cow comfort, however a rise in the project’s basic construction costs meant it has had to be shelved for the time being. “We can do it at a later date,” says Mr Kirby. “The important thing with any investment is to get the infrastructure right first.”

And this is an aspect of the overall project that has received particular attention. The infrastructure is designed to cope with the 400-cow herd that will come to fruition next spring when more replacement heifers join the current 300-head. But it will also accommodate further expansion towards 600 head.

“We’ve made sure everything is adaptable enough to put an extra cow yard on the end of the existing pad should the opportunity arise. That’s what investment’s about; looking at what might happen in the future.”

On a more day-to-day level, other small-scale machinery investments have been made. “For example, moving power washers around a unit of this size would be time-consuming,” says Mr Scott. “Instead the unit has a large-bore water system running at 5bar pressure which staff can tap into throughout the milking and cow area,” explains Mr Kirby.

Rainwater recovery was considered as a cost-saving measure but proved uneconomic. Even given the large area of covered yards, the captured water would only amount to 10% of demand. Moreover, the college site already has a bore-hole, so was used instead.

Waste water from tasks such as parlour cleaning is stored in large surge tanks. These can quickly disgorge large quantities of water to flood-wash areas like the cow collection yard, reducing the need for the scraper tractor to clean out after each milking.

Overall, investment has been geared to generate cost savings in labour, machinery and energy use wherever possible. It is not always possible to calculate what savings will be achieved, admits Mr Kirby, but he believes the energy-saving ethos has to be right.

“What we are aiming for is an operation that delivers a 5% return on capital and, effectively, has a 20-year lifespan.”