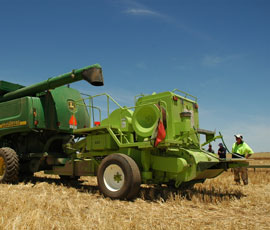 Grass and broadleaved weeds can claim to have caused more symptoms of stress among arable growers than the most nagging mother-in-law.

Harvest is the most important period for weed control. Modern combines do a good job of collecting clean grain samples, but with their choppers flying they are also pretty good at broadcasting weed seeds far and wide.

The only answer has been to apply generous quantities of glyphosate year after year.

But one Australian farmer has come up with a new tactic. Ray Harrington developed his Harrington Seed Destructor to try and get a grip of herbicide-resistant ryegrass on his 1,400ha farm.

Having mulled over ways to catch, cart, cook or cremate weed seeds, he decided that crushing would be the best form of annihilation.

Powered by an on-board engine, the mill can be towed behind any combine.

It is fed by two conveyors, which carry chaff material and straw separately to the machine.

The chaff fraction then enters a crushing unit where two sections of counter-rotating steel bars pulverise the seeds. To get the required grinding effect the outside section flies around at up to 500kph.

Once crushed, the chaff is blown out of the mill and spread on the field.

Mr Harrington reckons more than 95% of weed seeds are controlled by employing this system. That should mean there’s no need for any follow-up operations. As the seed bank empties, year-round herbicide usage should be cut significantly.

The crusher is not small, though – it tips the scales at 1.5t and uses about 3-litres/ha of diesel (probably more in higher yielding UK crops).

Keep up with the latest farm machinery news