Just two years ago, an Indiana farmer hand-picked a team of engineers from far and wide to set about his off-the-wall ambitions to build a colossal-capacity, bend-in-the-middle combine. We meet the new king of the US Great Plains

There’s a new beast at the top of the American farming food chain.

It’s a one-of-a-kind, 23t orange monolith strong enough to carry its own body weight in grain and with the stamina to run for 24-hours straight.

Of course, we’re talking here about the Tribine – the brainchild of 76-year-old Indiana farmer and businessman Ben Dillon, who decided it was time to rip up the combine-building blueprint that has stood largely unchanged since the Second World War. 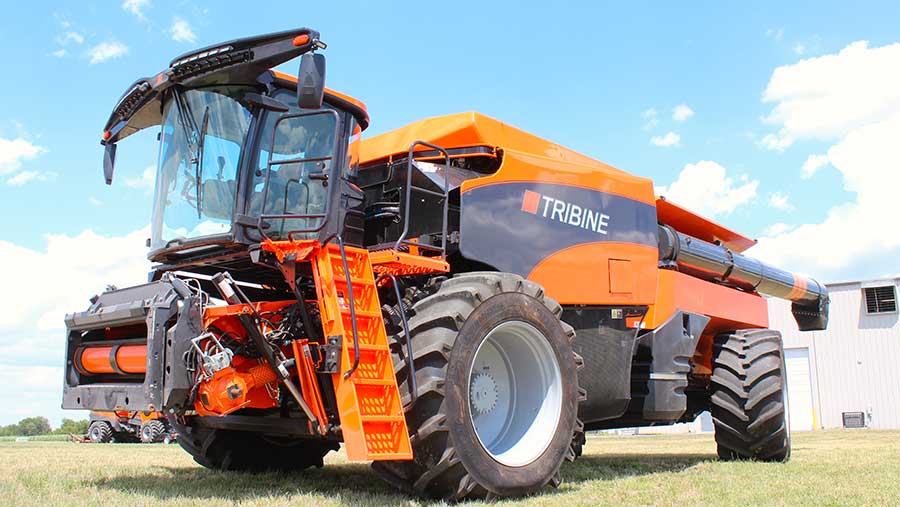 And he’s not stopping there. He and his merry band of designers, marketers, welders and farmers now intend to go toe-to-toe with some of the biggest machinery companies on the planet.

It’ll serve as a stark wake-up call to John Deere, Case, Agco and alike, who have watched on helplessly as the new golden boy of the combine world has stolen the headlines and racked up awards at every farm show it has attended.

The speed of evolution has been remarkable; with Mr Dillon’s millions, the team has transformed a blank sheet of paper into a full production machine in just 18 months.

Such rapid progression is unimaginable in the corporate world of Deere and alike where designers are held back by bureaucracy.

His goals were clear. The harvester had to have a tank big enough to carry an artic-load of grain and hit a top speed of 30mph, all while reducing soil damage underfoot.

A handful of pre-production machines later and his dream has been realised.

Such is the novelty value of the Tribine, it is protected by a fortress of 52 patents and the company has absolutely no intention of sharing them with the competition.

Mr Dillon first toyed with the combine-cart combination 20 years ago when he towed a chaser bin behind a standard harvester after becoming sick of double-handling grain.

Two years on, in 1999, he took things further by fully removing the combine’s rear wheels to form an articulated machine.

However, it wasn’t until 2013 that developments got more serious. He signed a deal with Agco firm Gleaner that allowed him to use the front of an S77 combine married to a grain cart.

It marked the birth of the Tribine, though the comparatively small feeder housing, limited fuel capacity, run-of-the-mill tyres and rear discharge auger were worlds away from the modern-day monster. 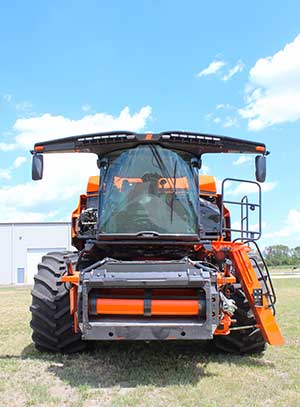 Eventually, his relationship with Agco turned into a tug of war over the design, so Mr Dillon assembled his own 22-man squad of farmers, designers and workshop men to get the machine to market.

Just a year later, in 2016, the company moved into a new office and factory in Newton, Kansas, before unveiling the first production model at the Farm Progress Show in Boon, Iowa.

The idea of cutting, threshing and carrying crops is orthodox in its nature, but the way the Tribine goes about its business is a real departure from the norm.

One of the biggest challenges for the designers was to reduce the yield-ravaging effect of soil compaction, which has become a huge problem across the US corn belt.

Part of the blame lies at the feet of harvesting teams that tread carelessly over fields with little concern about what’s happening underground.

However, that doesn’t mean sending out hundreds of tiny, space-age robot harvesters, say the brainy Tribine designers. Instead, it’s about using that weight more efficiently.

A closer look at the stats suggests it might not be the soil compaction sinner it appears at first glance. Empty weight is 22,600kg – only a ton heavier than its biggest rivals – but it wears huge, equal-sized shoes that run at low pressure to spread the weight over a massive footprint.

The high-capacity system also gets rid of grain carts – another compaction menace – that dart all over the fields to ferry the crop from combine to artic almost non-stop.

That capacity will be even more important as crops yields rise, headers get wider, field sizes grow and threshing systems become more efficient.

One engine was not deemed to be enough by the machine’s designers, who have knitted together two AdBlue-free nine-litre Cummins blocks each set to produce 325hp.

They sit in the front half of the machine and are kept cool by a single radiator. Tribine decided it was more fuel efficient to split the power supplies rather than have one 16-litre engine running full bore all of the time.

The two motors are fed by a 1,900-litre fuel tank that should last for 24 hours of continuous work.

One power supply runs the threshing and cleaning systems and the other spins a shaft on a hydraulic pump that, in turn, propels the four hydrostatic wheel motors.

The split design should also make it easier to tweak the power outputs for different models in the future.

Take the UK, for instance, where high straw yields will demand greater threshing power, but propulsion needs might remain quite modest. 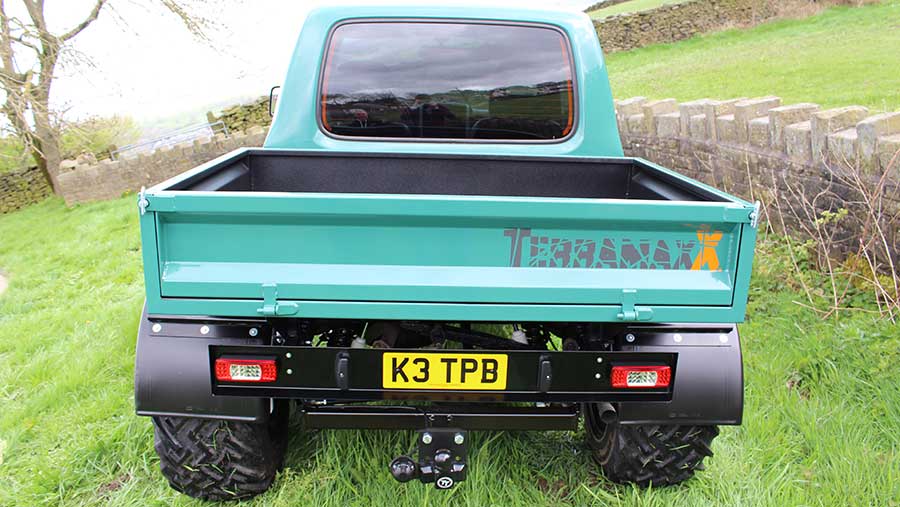 Custom harvesting teams making the long journeys up and down the corn belt will be salivating at the prospect of a 30mph top speed, but strict EU weight, speed and width limits mean the hydrostatic transmission will have to be heavily restricted in Europe.

That oil-powered driveline also means the Tribine does without the inconvenience of standard mechanical axles that get in the way of the feeder housing and grain bin, which gave the designers far more flexibility when it came to piecing the other parts of the jigsaw together.

The Tribine’s biggest quirk (and there’re a lot of them) is probably its steering arrangement.

It uses a super strong central articulation point that runs on a semi-circular, oscillating frame to pivot in the middle.

The combination of central pivot and rear-wheel steer means that when the elephantine Tribine decides to slip on its dancing shoes it’s capable of turning inside the width of its header and it can crab steer, too.

That tight-turning design also ruled out tracks. Instead, it wears four 1100mm-wide low sidewall tyres that squash by up to 152mm under load to spread the weight as evenly as possible.

In search of a header

Big combines take some feeding and, so far, Tribine has yet to find a header that can cope with its insatiable appetite for ripe crops, limiting its top working speed to 6mph.

The company doesn’t make its own cutterbar, so there’s no restriction on whose you can use. As standard, it comes with John Deere fixings but there are plenty of adaptor plate options on the market to carry different branded front-ends. 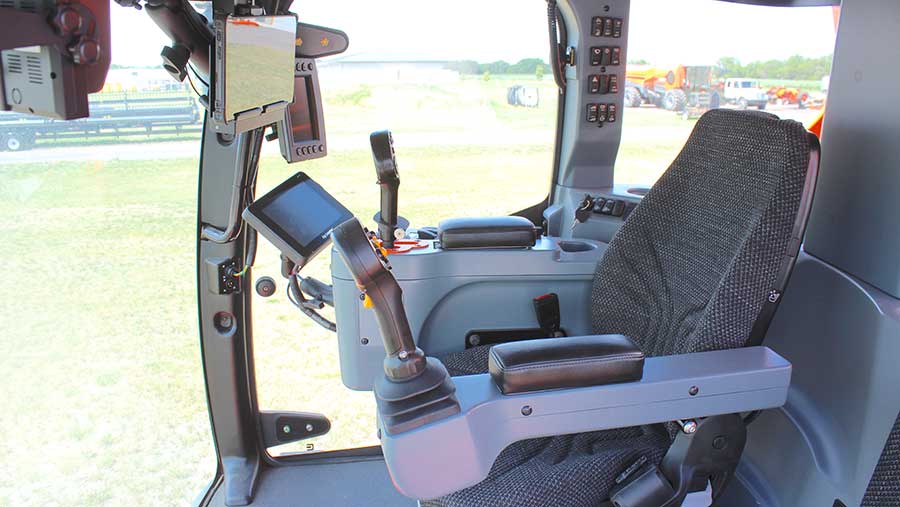 There’s unlikely to be any limit on size in the future, either. The Tribine packs double the lift capacity of its rivals, which the company says is the result of ram geometry – its plungers push vertically upwards when lifting, while its rivals’ plungers are angled to push outwards.

No surprise that Tribine has decided to go big here, too. The Kevlar-belted feeder is 168cm wide and the biggest on the market by some distance, forcing vast quantities of material down the harvester’s gullet.

Further back, a rotor almost a metre in diameter is hugged by a 270deg concave providing a 2.3sq m threshing surface.

All three banks of concaves can be moved from the cab and, as they’re are closed, the triple-pinch-point threshing becomes more pronounced and aggressive.

The sieve area is another 8.58sq m, before trash is thrown down two chutes with adjustable doors to vary the spread pattern. 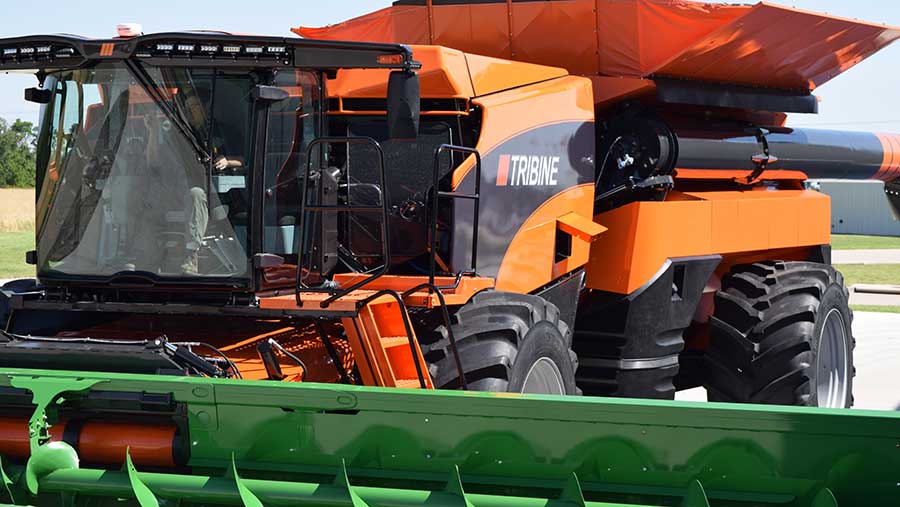 The auger that transfers the grain to the tail end forms part of the hitch connecting the two halves of the combine.

The cart sits low – an advantage of the axle-less design – to improve its balance on slopes.

A 16in bubble auger churns the material from the cleaning system, filling the bin from rear to front. Chock-a-block capacity is 1,000bu – a tad over 35,000-litres – and almost triple that of a high capacity Claas Lexion.

The idea is that it can fill an articulated truck in one go and make a return bout in a mile-long field without having to unload during the journey. That means that, typically, the Tribine unloads every 12 minutes, versus every four minutes for a conventional machine.

When it does come to unloading, a 12in auger runs along the base of the tank to keep the main 20in discharge auger stuffed.

Offload speeds make for some startling reading, too – 300-litres/sec is more than double the rate of its rivals and the whole load can be shifted in just shy of two minutes.

The company is also working on an extendable auger system that telescopes by 6ft to fit more comfortably into CTF systems. 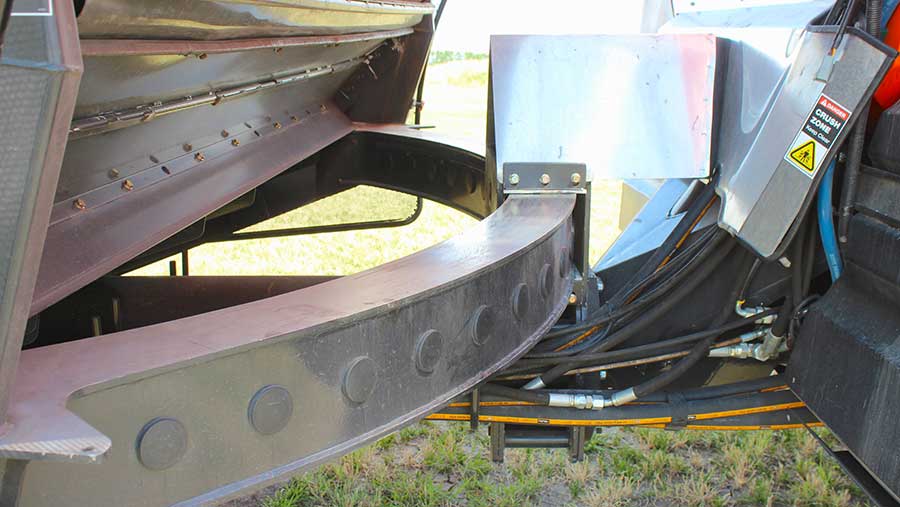 Custom harvesting teams spend months in the saddle, so cab design was a big part of the development process.

The forager-style shell is built in Minnesota and is also used on Agco’s Rogator sprayers. It has glass wrapped around 270deg to help provide a better look at the discharge auger, which sits a long way further back than a standard harvester.

Everything inside is custom made. Most shockingly, there’s no steering wheel – just a big window looking down towards the feeder housing.

Wheels are stone-age technology, we’re told, and have been replaced by two fighter-pilot-style joysticks. The left-hand one deals with steering (left-to-right movement for the articulation; twists for the rear wheels), while the right carries header controls and forward/reverse speeds.

The natty, started-from-scratch design frees up space for a full-sized passenger seat and a bar loops all the way around the front windscreen to carry in-cab screens in any position you fancy.

The main screen is sourced from Ag Leader and controls the feeder, threshing, yield monitor and GPS, while another relays Big Brother-style footage from the eight-piece camera package dotted everywhere from the end of the discharge auger to the back of the grain cart.

Who will be selling it?

Designing and building a prototype machine is one thing, but offering a full sales, service and support package is a whole new challenge.

Tribine reckons offering top-drawer warranty and support will help get one up on its billion-dollar rivals so, for the next couple of years, that means only selling its combines into five key states that make up 60% of the US corn belt – Indiana, Illinois, Iowa, Nebraska and Kansas.

Those five states can be relatively easily serviced from Tribine’s two main depots in Newton, Kansas (where it has capacity to build up to four machines a month) and Logansport, Indiana.

Along with a reliable back-up team, first-time buyers will get a two-day course on the inner workings of the machine, along with a two-season warranty and a complete set of spare belts and bearings.

Given that the product is completely new and in the early stages of production, Tribine has also agreed to replicate any changes it makes to production models on customer machines for two years post-purchase. 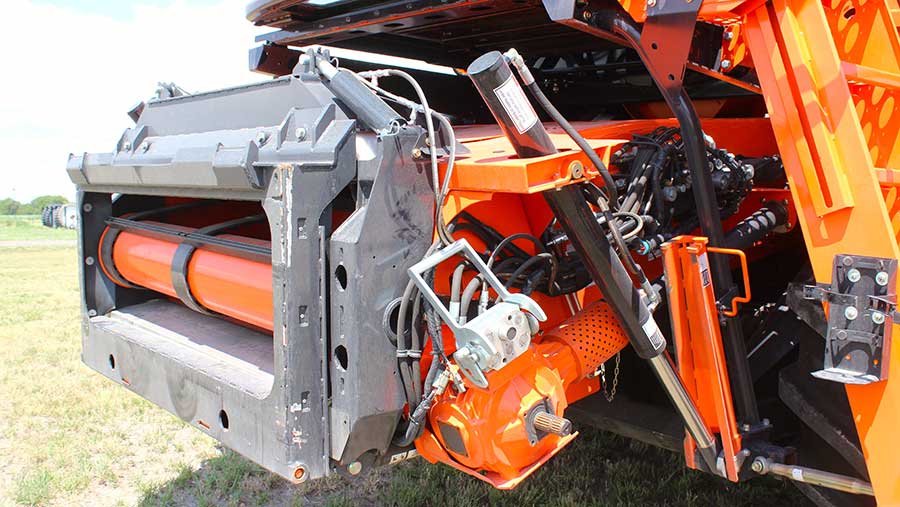 Will it ever come to Europe?

For now, the company intends to stay in the US where it is targeting 1,000ha-plus farms as it works to make a dent in John Deere’s 35% market share.

It’s then likely to head to Brazil, Australia, and parts of eastern Europe where it can slot in seamlessly without a redesign.

European countries will undoubtedly prove more of a headache – the Tribine’s heavyweight proportions are way too much for European roads and the machine will have to go under a drastic redesign before it can realistically consider the UK a target market.