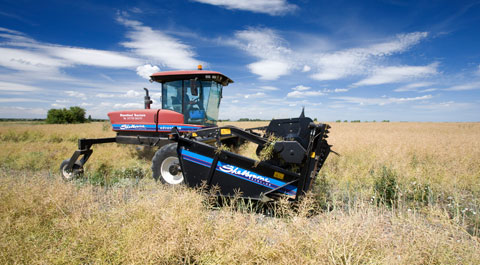 In 1985 Keith Shelbourne came up with a proposal for a grain stripper. It was not a new idea mechanical fingers were used to strip grain from standing straw 100 years ago. But when he discussed it with the Silsoe Research Institute (SRI) the response was enthusiastic and stripper header development became a priority project.

Shelbourne Reynolds acquired the manufacturing and marketing rights to the SRI stripper header attachment for combine harvesters, and when production started in 1988 it attracted enormous interest.

Stripping the grain and leaving the straw standing reduces the volume of crop material passing through the harvester, allowing a big increase in work rates (up to 100% in some crops) when a stripper header replaced a conventional cutterbar.

Standing straw left by the stripper burned easily, but when straw burning was banned in 1989 the straw created big problems for stripper header owners and UK interest in the new harvesting technique faded rapidly.

The response from other countries was different. More than 4000 stripper headers have been sold worldwide, with the USA the biggest export market. Kazakhstan produced the biggest ever order, with 70 of the range-topping 32ft wide version supplied to one customer.

Grain strippers are used for rice harvesting in Australia and Italy, Russia is a growth market and a special version is supplied in kit form to China to fit a locally-built combine.

UK sales total one or two headers a year for harvesting grass seed or, occasionally, to leave standing straw for thatch making.

Marketing director Neil Smith says the main priority has been to diversify into livestock machinery.

In 1993 SR took over Econ’s muckspreaders and now builds four Powerspread models. In 1994 it launched the Powermix, now one of the UK’s top selling mixer wagons, with flatpack versions assembled in China.

A further 2004 acquisition added the Mekanag range of combine header trailers to the product line. This was followed closely by PowerBlade tractor-mounted hedge cutters developed by Shelbourne Reynolds engineers. The hedge cutters take the company into the amenity/estate management sector for the first time and are selling well in a crowded market.

The company was formed in 1972, when Keith Shelbourne bought Reynolds Engineering, a company that specialised in making pea cutters, pick-up reels and headers

Owned by: A London investment company