Due to European road regulations, manufacturers have little wriggle room to make combines bigger – like the massive Tribine now prowling the Great Plains in the US – to make performance gains.

Instead, smart technological developments and wider headers will provide European farmers with the extra output they crave. Evidence of this can be seen on Case’s latest 250-series Axial-Flow single-rotor machines. 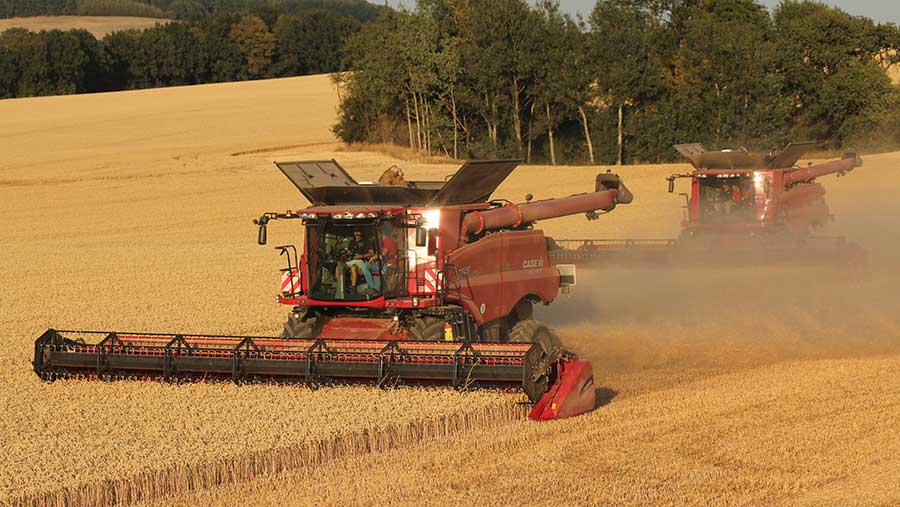 The new models replace the outgoing 240-series and much of the hardware between the wheels is the same. However, following the likes of Claas and John Deere, Case has now introduced its own take on harvester automation with its new Advanced Farming Systems (AFS) Harvest Command system.

Fed data from 16 different points on the threshing, cleaning and grain transfer systems, including two sensor types unique to the 250-series, Harvest Command can adjust seven settings to improve performance.

The first of the two unique gizmos are the pressure sensors situated at the back of the sieves (one on each side) that monitor the air pressure differential between top and bottom sieves.

This indicates whether the sieves are over- or underloaded – both of which lead to increased grain losses – and Harvest Command adjusts sieve openings and cleaning fan speed to bring performance back in line.

The second unique sensor is a patented multispectral camera that shines visible and invisible light onto the contents of the clean grain elevator to help gauge levels of broken grain and impurities in the sample.

Algorithms in the Harvest Command program are then used to tweak the threshing and cleaning system settings to improve the sample without compromising output. 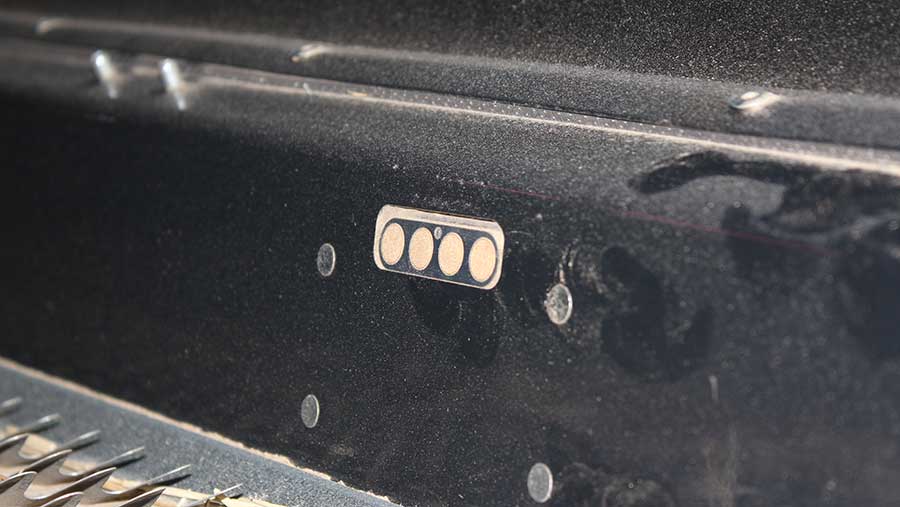 This is aided by a new feature of adjustable rotor cage vanes, which can be controlled manually from the cab or automatically when the Harvest Command system is engaged.

Linked by a common bar, an electronic actuator will adjust the angle of the four vanes in the rotor cage, with a more upright position slowing throughput of material and vice versa to give more, or less, threshing action depending on conditions.

When the operator opts for full automation, a target engine load and maximum ground speed must be set and the combine then operate in four different modes.

In “Performance” mode, the machine will control speed to match an acceptable level of grain losses, while “Fixed Throughput” mode will maintain a target throughput by adjusting speed and tweaking settings elsewhere to minimise losses.

“Maximum Throughput” sees the combine operate up to the speed or power limit set by the operator and minimises losses from the rotor and cleaning system through automatic adjustments.

Finally, “Grain Quality” mode helps seed growers or those looking to home-save seed to maximise grain quality and minimise screenings in the sample, while also reducing losses out the back.

Flicking between these settings while operating the machine at the launch in Germany, the subtle shift between speeds, settings and losses monitor was noticeable on the AFS Pro700 touch screen display as it moved through the wheat crop.

Case reckons the system can boost productivity by as much as 10% compared with the same machine without automation.

This is achieved by helping experienced operators increase output and produce a better grain sample, particularly as fatigue sets in, while also allowing less-experienced drivers to do a decent job without the need to fiddle with the settings too much.

The latter could ease labour pressures where it’s tough to recruit top-quality operators, or where seasonal staff are required, without compromising performance. 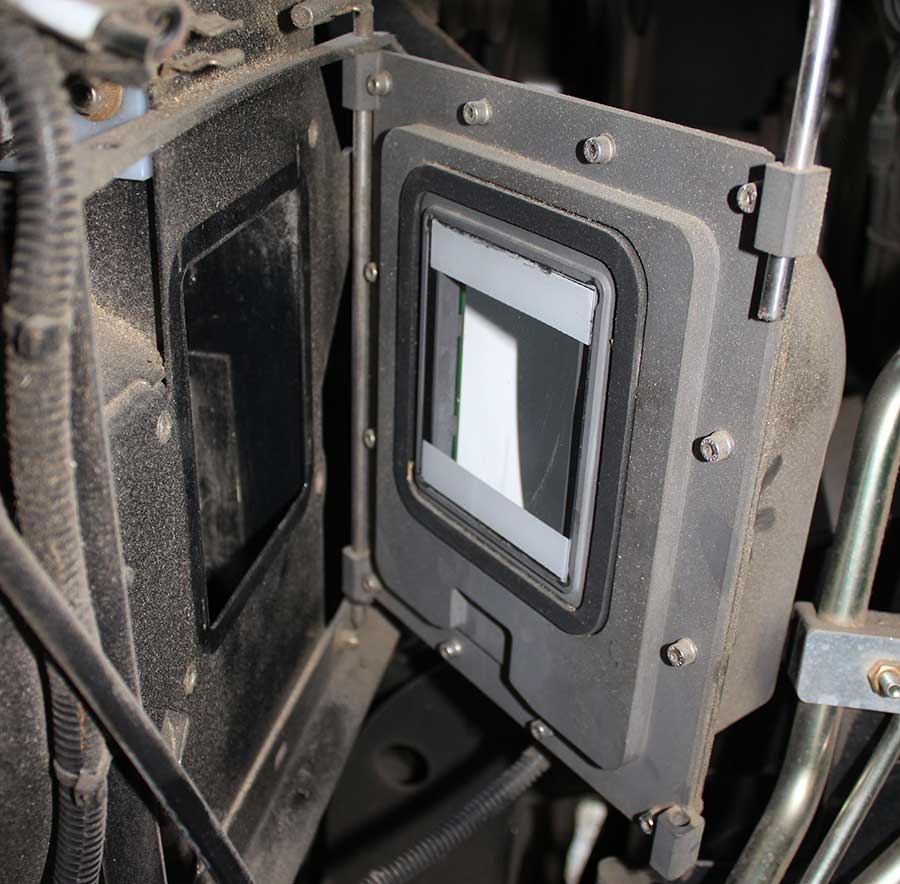 In addition to the smart technology, some fundamentals have also received a revamp. At the front, a beefed-up feeder elevator gets an improved 6.1t lift capacity.

This has been achieved by lowering the rear of the double-acting lifting rams, allowing the larger Axial-Flow machines to carry the monster 13.5m (45ft) draper headers making their way into the European market, plus the heaviest 18-row corn headers.

These have a moulded rear support, which makes them less prone to bending if any hard objects are pulled in to the feeder elevator – something that occurs more frequently on wider headers.

The last piece of the feeder elevator revamp is an option for a 12deg hydraulic fore and aft adjustment, allowing the operator to adjust the angle of the header to improve crop flow in different crops and conditions.

When on the deck picking up peas, for example, a steeper angle is required, while taller crops such as oilseed rape feed better with the table level. 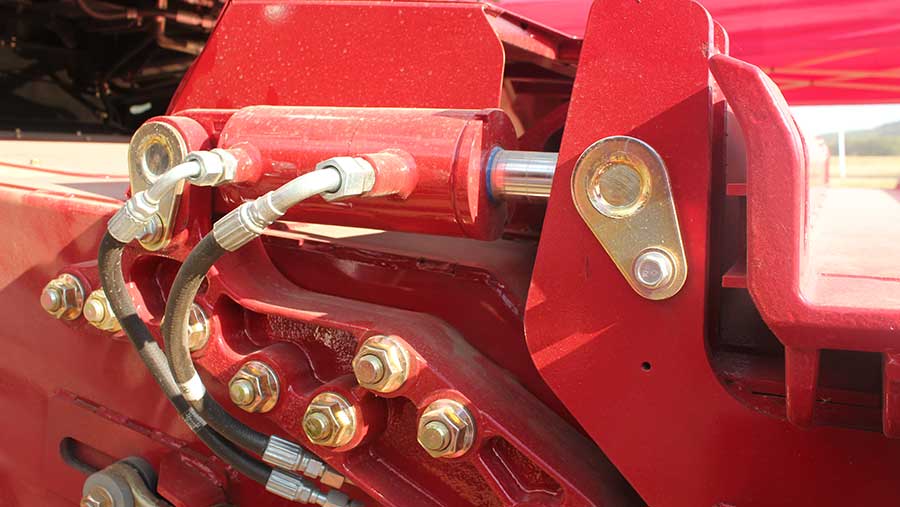 The 250-series machines benefit from a new hydrostatic transmission, which has a field and a road mode and on-the-move two-speed range control. This, says Case, delivers better traction and means there is no need to stop and shift while working or travelling on hills.

Operated via a scalable speed controller, it features a closed-loop speed control that maintains the set speed in changing ground conditions. Maximum speeds in range one are 18kph and 40kph in range two, although reduced maximums can be set.

More powerful hydraulic drives also see the 250-series possess 36% greater gradeability – or ability to travel up slopes – when travelling on the road.

An updated diff lock replaces the previous mechanical pedal with a floor-mounted electrical button, while a shift from an external disc to internal oil-cooled brake reduces the pedal pressure needed for the same braking effort and improves cooling in times of heavy brake use.

The first commercial 250-series machines are expected to arrive on UK farms for the 2019 season. 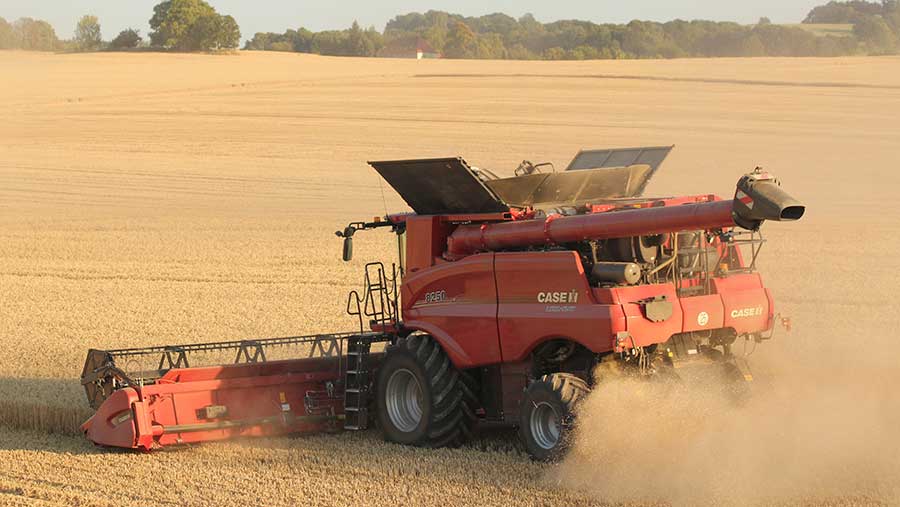