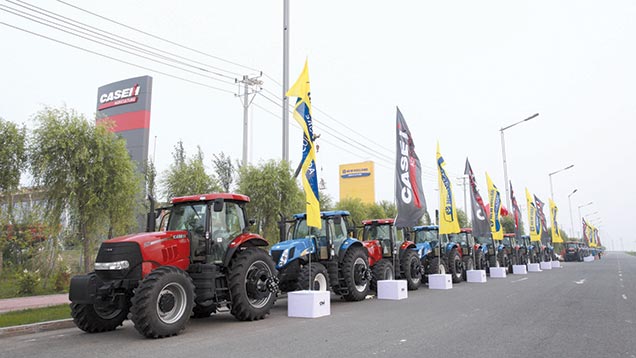 There’s no getting away from it – as farmers in Europe and North America buy bigger and bigger tractors, the actual number of units being sold is in steady decline. So, developing markets with good long-term prospects and a thirst for more mechanisation is acutely important for manufacturers.

See also: Why tractor manufacturers are flocking to China

South America and India opened their markets to western manufacturers long ago and Russia has more recently encouraged them to set up shop there. But it’s China – the world’s second most populous nation after India – that is attracting  investment in tractor and ag machinery production by the big western farm machinery makers.

Not only has the Chinese market got more accessible, but demand has been driven by  government incentives designed to improve productivity and cost-efficiency.

According to figures published by Agrievolution, a global alliance of ag machinery maker associations, the market for tractors above 24hp more than doubled between 2008 and 2013 from about 200,000 to 445,000 units.

That remarkable pace has slowed since then. Chinese maker YTO, a leading domestic manufacturer, reported that first-half 2014 industry sales of full-size farm tractors were down more than 17%.

Despite the slowdown in demand, China is still an attractive long-term market for tractor and equipment makers hungry for growth. Case New Holland and John Deere put down roots in China many years ago and have been joined more recently by Agco and Same Deutz-Fahr Group.

All the companies involved are keen to push up their Asia-Pacific revenues and enjoy the opportunities that China provides for sourcing low-cost components – and complete tractors – for other markets.

Farmers in China are already served by a lot of domestic manufacturers, of course, but most cater for the mass market with simple tractors from 25hp to about 50hp. There are bigger Chinese-made tractors, too, though – Foton Lovol and First Tractor Company make 200hp models.

So western manufacturers have to tread a fine line. Do they build tractors of Chinese spec to remain competitive with domestic suppliers? Or do they make “value” products to rival other Western-designed machines?

So who’s doing what in China?

Will these Chinese tractors be coming to the UK?

Some already do, though they tend to be small units from Branson and YTO. The big manufacturers say they have no plans to bring in big tractors from China at the moment. Longer term, that could change, but don’t expect to see a 300hp Chinese-made Deere in a UK dealer any day now.

After several years of on-off discussions with First Tractor Company over a potential joint venture, Agco announced in 2009 that it would go it alone and invest $100m in a project to construct two new factories in China.

Last year, the launch of the first Massey Ferguson Global series tractors followed the  building of a new green-field assembly plant in Changzhou for low- and medium- power tractors. Next on the agenda is a second plant at Daqing, north-east of Beijing, that will build higher-horsepower tractors as well as harvest machinery.

For Agco, moving into China isn’t just about entering a new market with big potential. It’s also the appeal of lower-cost components and labour that will help the corporation boost profitability.

In fact, the Changzhou plant is set to become the key facility for Agco’s global manufacturing network, supplying components and assemblies to other factories, including Beauvais in France.

Case New Holland has been involved in China for at least 100 years through its International Harvester and New Holland heritage. But it expanded 15 years ago by setting up two manufacturing joint ventures in quick succession.

The other is with Shanghai Tractor and Combustion Engine Co for the manufacture of power units up to 100hp. Together, this makes New Holland the biggest Western player in the country.

The US$75m (£50m) Shanghai Tractor deal gave NH access to a big manufacturing facility and a wide dealer network in return for access to its tractor designs and technology.

However, CNH Industrial closed the Shanghai joint venture last year (a move that cost it $40m [£27m]) having built a wholly-owned manufacturing plant for Case IH and New Holland tractors and harvest machinery in Harbin.

The $100m (£67m) factory is said to be the biggest ag equipment facility in north-east China, with an R&D centre that opened the previous year to develop components and adapt their existing products for the Chinese market.

Deere’s involvement in the Chinese market dates back to the mid-1970s and tractors have been manufactured close to the north-east coast since a joint venture was formed with state-owned Tianjin Tractor Manufacturing Company.

The resulting John Deere Tiantuo Company, which is 51% owned by Deere, involved a $21m (£14m) joint investment to build 55-80hp tractors. Now the products built in Tianjin go up to 135hp.

A drivetrain manufacturing and assembly plant opened in 2006 and a $60m (£40m) engine plant was completed in 2013 to make 50-220hp diesel engines for agricultural and construction equipment.

Deere also widened its manufacturing footprint in China by spending $85m (£57m) in 2007 on Ningbo Benye, the largest tractor maker in southern China. Benye’s 20-50hp product range neatly gave Deere an expanded line of tractors to meet the demands of Chinese farmers and export markets in Asia, Africa and central and Eastern Europe.

Another $80m (£54m) was spent on a new factory in Harbin in the north-east to produce medium and large tractors from 150hp upwards, plus combines and sprayers to supply the region’s large crop farms. It came on stream at the end of 2012.

A joint venture with Shandong Changlin, established in 2011, marked Same Deutz-Fahr’s second foray into China. The Italian group first completed a factory in 2009 as part of a $47m (£30m) project to gain a foothold in the market.

The plant was located at Dalian, a port city in the north-east Liaoning Province, close to a new Deutz joint venture engine factory in the city. It was big enough to build 6,000 tractors a year, with plans to export production initially before supplying the domestic market.

However, the appointment of a new chief executive at SDF brought a change of policy, and the business was closed in 2012 before production started (at a cost of several million euros). Instead SDF has now entered into a partnership with Shandong Changlin and access to its extensive distribution network.

The Chinese manufacturer is an established player in the walking tractor market and had started making full-size tractors up to 110hp. The 50:50 joint venture with SDF combined the existing Shu-He tractor range with local production of higher-spec and higher-power Same and Deutz-Fahr tractor designs, which have progressively moved up to about 270hp.

The partners planned a new production site at Linyi in Shandong province for 26-170hp tractors. This was inaugurated last year with the launch of the first model in a new 140-170hp range designed and built in China, along with a second facility in Suihua City to build higher horsepower Deutz-Fahr models.