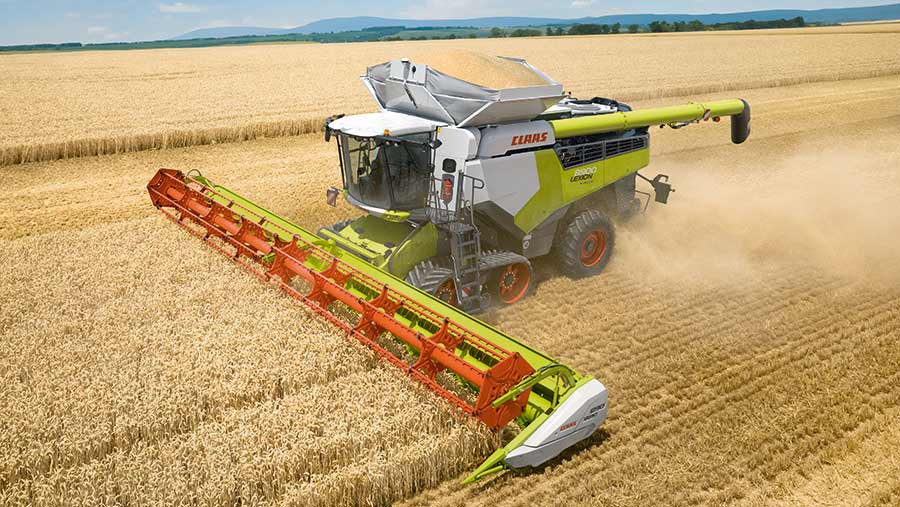 Claas has just won the most recent hand of combine manufacturer Top Trumps after it launched its most powerful Lexion machines yet.

The headline-grabbing flagship 8900 is the biggest in the new Lexion range and currently the most powerful combine available to buy.

On its release, Agco’s Ideal 10 will match it, but the model is not on sale until next year and first machines won’t arrive on UK farms until 2021.

Claas’ Lexion range has been kicking up dust across Europe since the 400-series was introduced in 1995, and has been the UK and Ireland’s bestseller for much of that time.

And while there have been bigger and better models added to the Lexion line-up along the way, little about its concept has changed.

It uses the same acceleration and pre-separation (APS) threshing system taken from its predecessor, the Mega, which uses an accelerator drum to create a faster and more consistent crop flow to its main 600mm separation drum.

In hybrid Lexions, material is then passed to twin rotors via a feed drum or impeller, or to straw walkers in the company’s conventional offerings within the range.

However, for next season, UK and Ireland customers can purchase models from two new hybrid ranges, which are topped by the monster 8900 (see table).

Claas says the power upgrade is purely a means of dealing with the increased throughput provided by the rejigged APS Synflow threshing system.

The 600mm-diameter threshing drum with eight rasp bars on current models such as the 780 has been replaced by a 26% larger 755mm version with 10 bars.

The drum speed is also synchronised with accelerator and feed drums for a smoother flow. 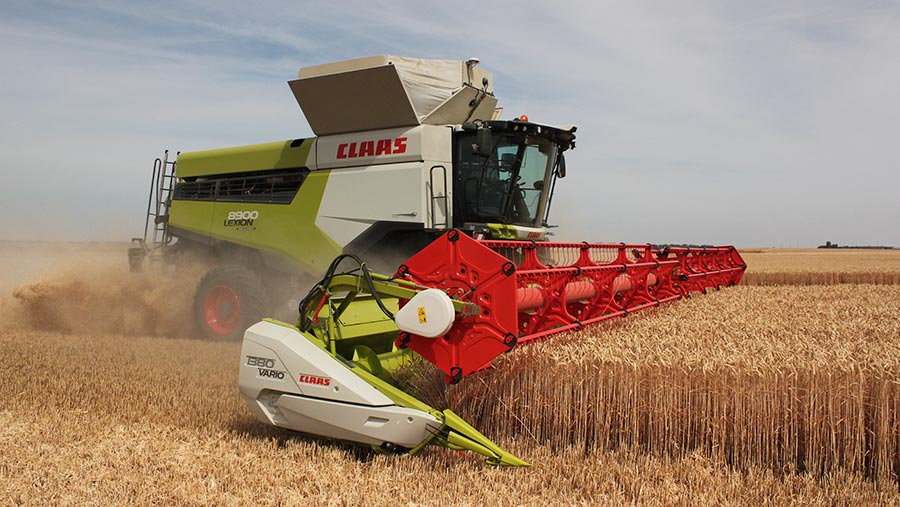 The bigger drum, twinned with a new concave design, sees an increased separation area and shallower concave wrap, so there is a straighter flow of material through the primary threshing unit.

As a result of all the changes, the threshing process drains less power and saves fuel, says Claas, is kinder on straw and grain and, ultimately, allows for higher throughput.

To deal with the increased volume of crop coming through the primary threshing system, the Lexion’s rotors have also had an overhaul, with a shallower angle easing crop flow and reducing straw damage.

Rotor concaves have been redesigned and there are now four, rather than three, rotor cover plates (or bomb doors), which improve grain separation, reduce losses and apparently make cleaning much easier.

There is also much more control over threshing performance at every stage, and all settings are adjustable from the cab.

The option of the Cemos Automatic feature for autonomous optimisation of combine performance is also available.

When considering throughput, there is no like-for-like comparison with the 8900, as it is the biggest Lexion yet and in a class of its own.

However, the 8800 is equivalent to the current 780 and offers about 10% more performance than its predecessor.

With the increased performance across the range, there is a need for larger grain tank options, and the flagship 8900 Terra Trac can be specced with a whopping 18,000-litre hold.

The same machine can also take advantage of a new 13.8m header. 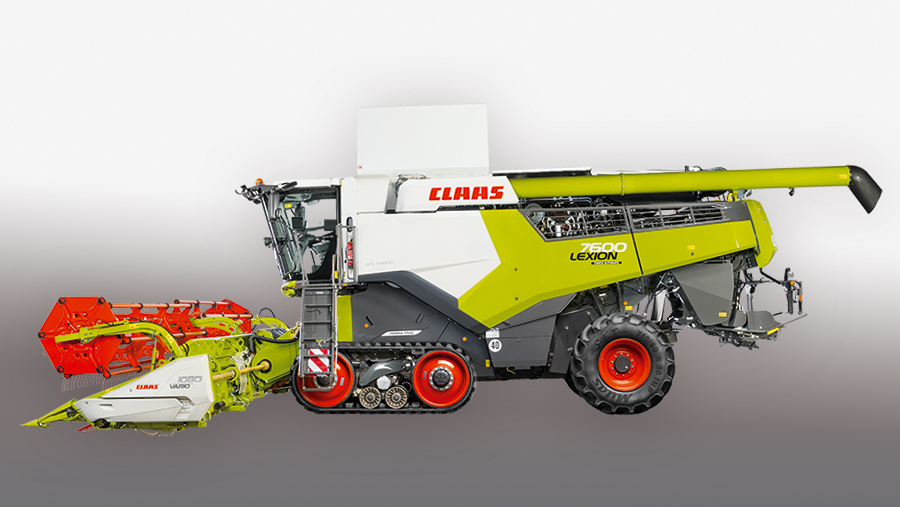 Tank access is also improved, and a maximum unloading auger speed of 180-litres/sec sees the largest tank emptied in just 100 seconds – a setup that is available on the three 8000-series models.

As this might be excessive when trailers are getting full, the rate can be halved to 90 litres/sec to avoid any messy spillages.

The unloading auger pivot angle has been increased from 101deg to 105deg, which may not sound much, but Claas says it significantly improves visibility when unloading.

The Lexion now benefits from a less-complicated driveline that has two fewer belts and chains. Deep pulleys prone to a build-up of dirt have also been replaced to ease maintenance.

In addition, instead of a belt tensioner engaging the combine’s drive, it is now controlled by a dry clutch, which has eliminated the familiar screech when the machine is kicked into gear.

The system senses engine load and adjusts output to suit, so when requirement is low, output is decreased and significant fuel savings can be made.

When more is required – during unloading or in tough conditions, for example – extra power from the engine is made available.

Operators can also rejoice, as the cab has had a major overhaul, with a much bigger workspace improving comfort and a larger inspection window giving better visibility into the grain tank. 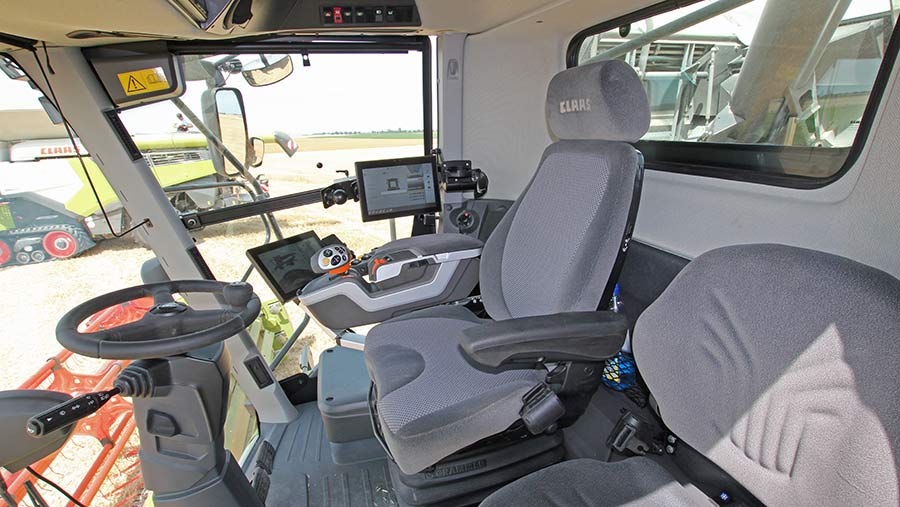 A new colour touchscreen Cebis control unit has replaced the outdated rotary and push switch-controlled monitor on previous models, although the ability to control the unit’s main functions in this way is still possible for those resistant to change.

There is also Direct Control, which sees a number of extra switches in the armrest – like on the Tucano – which can control all major settings, with a box popping up on screen to show the level of adjustment.

Claas did not provide pricing information, but this should become clear by September. 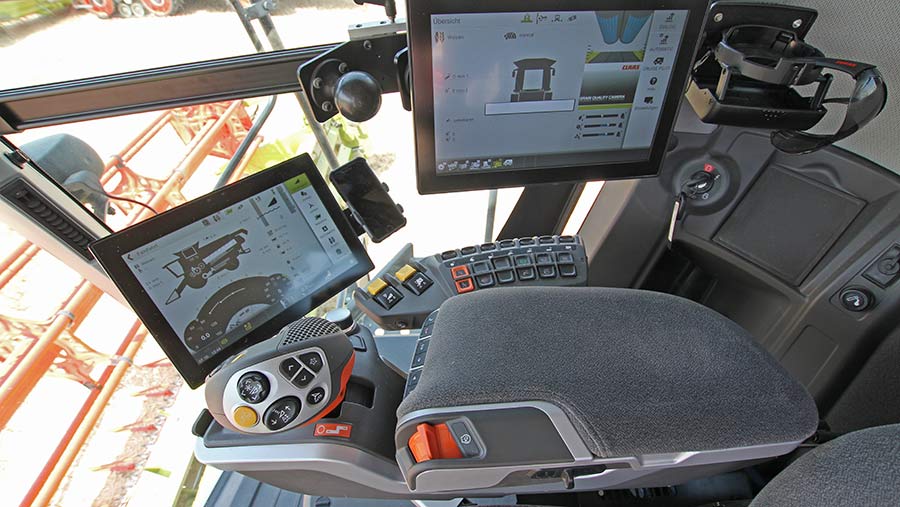 What about straw walker machines? 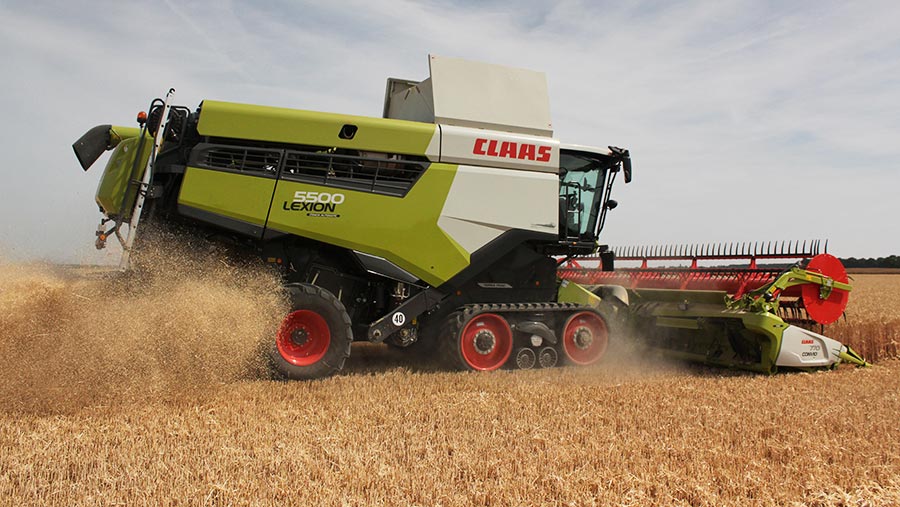 Also at the launch event in France were two conventional Lexion combines from the new five-walker 5000-series and six-walker 6000-series, but these won’t be available in the UK just yet.

They benefit from all the same upgrades and options as their hybrid cousins, including the new APS Synflow threshing system, but the walker machines get an additional 600mm separator drum ahead of the impeller, to increase threshing area.

With hybrids now dominating Claas combine sales, the firm has decided to concentrate on establishing the new 7000- and 8000-series in 2020, before bringing over the new and improved walker machines in 2021.