Upping combine capacity is one way of coping if we have a repeat of the near-disastrous weather we’ve seen for the past two summers. But what’s the best way to do it? Nick Fone looks at the options for buying second-hand, hiring, or using a contractor.

After two successive summers that will go down as harvests to forget, many farmers are looking at ways of boosting combine capacity as a means of outwitting the weatherman.

For larger growers with big, shiny machines that are regularly replaced, hopping up a rung on the harvester ladder isn’t too much of a drama. Often it’s just a matter of softening up the bank manager or finance agent with coffee and biscuits and then hitting them with a water-tight financial case that they can’t argue against.

But for smaller farmers it’s a different story. Having a combine capable of cutting 1500 acres on a 500-acre farm is an expensive luxury. But at least it is one route to ensuring that crops are gathered at their driest.

Many might be looking at buying but combine hire specialist APH (Agricultural Plant Hire) has some cautionary advice. Not surprisingly, the firm recommends looking closely into renting a combine for the summer, but also suggests that the right contractor with the right kit can still be a good, reliable option.

“But there just aren’t the medium-sized five-walker machines out there. For that money, you can end up with a high-output harvester, but it will have clocked up about 3000 hours, so reliability becomes an issue.”

A big second-hand combine may help to speed up harvest, but won’t necessarily guarantee reliability. Consider hiring one or using a contractor to fix your harvest costs.

The reason for the shortage of middleweight combines is partly down to exchange rates, he says. “We’ve seen a 20% shift in currency over the past 18 months. So European buyers have been coming over by the bus-load and buying everything that moves.

“It’s simple supply and demand, which drives up prices on the home market.” This, along with the reliability issues of running high-hour harvesters, can make the cost of ownership unpredictable. Renting is one way around that issue.

“Generally, hiring a combine will cost the same as owning one,” says Mr Powell. “But with hire it’s a known fixed cost. If there’s a breakdown it’s our responsibility to get it sorted, so the headache’s taken out of the job.”

Harvestcare is the most popular, with many operators prepared to sort out minor breakdowns themselves. More than half of the enquiries the company receives are from farmers with less than 240ha (600 acres) to cut. These customers are often advised to consider teaming up with a neighbour to spread the cost of the hire or think about part-season rental. For example, winter barley growers on the east coast of Norfolk may start harvest in mid-July and finish by late August. In such a case, APH has the opportunity to shift that combine on to cut later crops for another customer further north. Both farmers then pay a reduced hire charge.

If hiring isn’t your thing and contractors are out the window because you want control of your own harvest, then now is the time to start looking for second-hand options. To get an idea of what you get for your money, here’s a selection from the second-hand lists of APH and fellow Cambridgeshire combine dealer Kevin Kirby. 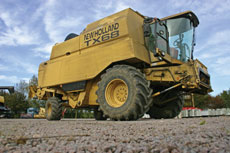 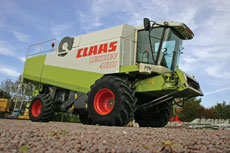 Sum-up High output but can be hard on straw 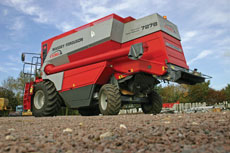 Sum-up High-output and gentle on straw 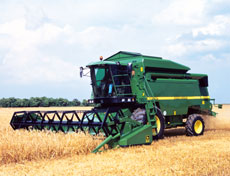 [Pic to come from Isabel] 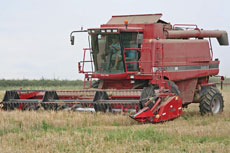 Sum-up Simple straightforward rotary combine, can be heavy on straw 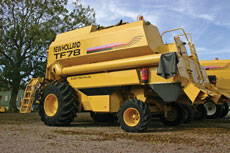 Sum-up High-output hybrid, can be hard on straw 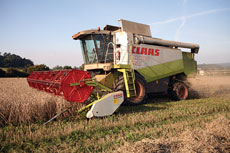 APH sales engineer Kevin Butter gives some advice on what to look out for when looking for a used combine.

The general condition of the machine will give the best indication as to how well it’s been looked after. As an example, check the main drive belts for cracks and signs of wear. If they haven’t been changed, that will indicate maintenance hasn’t been thorough.

Inspect the concave for any obvious damage, such as broken wires or bent ribs – this will tell you if the machine has swallowed something it shouldn’t have and could mean trouble through the threshing system. Rasp-bar teeth worn below 6mm will have a detrimental effect of threshing efficiency so factor in £450 for a new set or up to £1000 for a new drum.

Check there is no oily scum or emulsion in the coolant. Start engine and check the breather pipe. If it is smoking it could indicate worn piston rings as a result of it being run with a blocked filter. APH recommends retro-fitting a finer secondary air-filter to older combines to avoid such damage.

Set the combine mechanism going and walk around it listening for anything untoward. Dodgy bearings or worn belts should be easy to pick up.

Look out for cracks around the chopper mountings on the rear hood. Their presence usually indicates that the rotor has been run out of balance. This is often caused by wear in the blade brushes so check and replace them before taking the rotor off to be rebalanced. A new set of blades could cost anything between £400 and £1000, but they will pay for themselves in fuel savings.

Inspect the tyre sidewalls for bulges and cracks. When run under-inflated, air can get down between the laminate layers and cause bubbling. This can be sorted by fitting tubes. But expect to pay up to £1500 for new front-end rubber.

Go through all the controls and check that everything works. Often electrical faults can be down to poor contacts or bad earths rather than component failure. Buy a can of electrical cleaner and use it on sensors, switchgear and connectors.

Look out for wear where the walkers run alongside each other. This is usually caused by worn bearings on the cam-shaft, particularly where wooden block bearings are used, as on John Deere and Claas combines. If left too long, the shaft will also need replacing.

Check for cracks and welds on the sieves – repairs could be a sign of shaker-shoe bearing issues. It’ll take a fitter a day to replace them.

Inspect the double-fingers for knife wear. Big gaps mean the knife won’t cut cleanly and can flex, which puts extra strain on the driveline and wobble-box.

Check chain tension on the clean-grain and returns elevators. If they’ve been allowed to run slack they can damage the centre-plate and it’s an expensive job to replace it.