The introduction of a new grain tank discharge auger and modified cutting table for Claas combines has improved their compatibility with wide-spaced controlled traffic farming systems.

However, one limitation has been the compatibility of Claas combines that don’t allow tractors and trailers to run on wider tramlines, such as 36m spacings.

That’s until now with the launch of the 1230 cutting table, when coupled with the 7XL unloading auger. 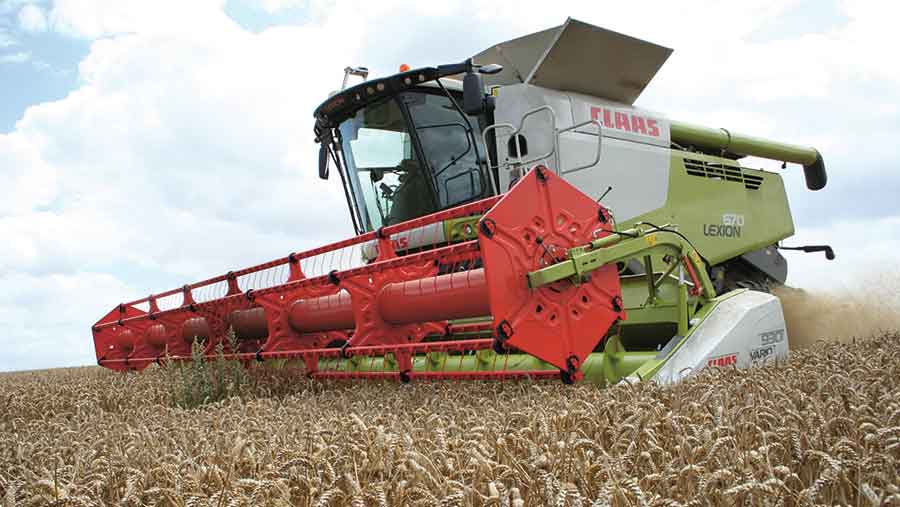 Having earlier introduced 10.5m and 12.3m versions of the Vario adjustable knife position tables, Claas has replaced the former with a redesigned 10.8m option that provides greater leeway for leaning crops of oilseed rape and others.

It also incorporates a number of new features shared with the latest Vario 1230 table, including a larger diameter auger (660mm) to cope with large volumes of straw, and integrated filler plates that allow infinitely adjustable knife position over a 70cm range from -10cm to +60cm from the default position.

Both have separate cutterbars, reels and augers for each side of the table, slot-in side knives with automatic hydraulic drive coupling and Laser Pilot guidance scanners that can now be folded and adjusted without resorting to any tools.

The 7XL unloading auger is a controlled traffic farming upgrade for tracked Lexion 700 harvesters with 13,500 or 11,000-litre grain tanks, which have been reinforced and given an upgraded drive system and turret to cope with the extra loads imposed.

The auger folds part way along its length to tuck behind the straw hood for transport and with 12m reach, keeps trailers on 36m permanent tramlines when the combine runs a Vario 1230 table. It joins the 10m 4XL and 9m 3XL available for other CTF layouts.

Claas has brought its power- and fuel-saving Dynamic Cooling system to the Lexion 600 series straw walker combines together with Mercedes-Benz replacements for the remaining Caterpillar engines in the range.

Although the Lexion 670 loses 14hp and the 630 and 650 lose 5hp thanks to the engine change, improved torque is said to go some way to making up the difference. 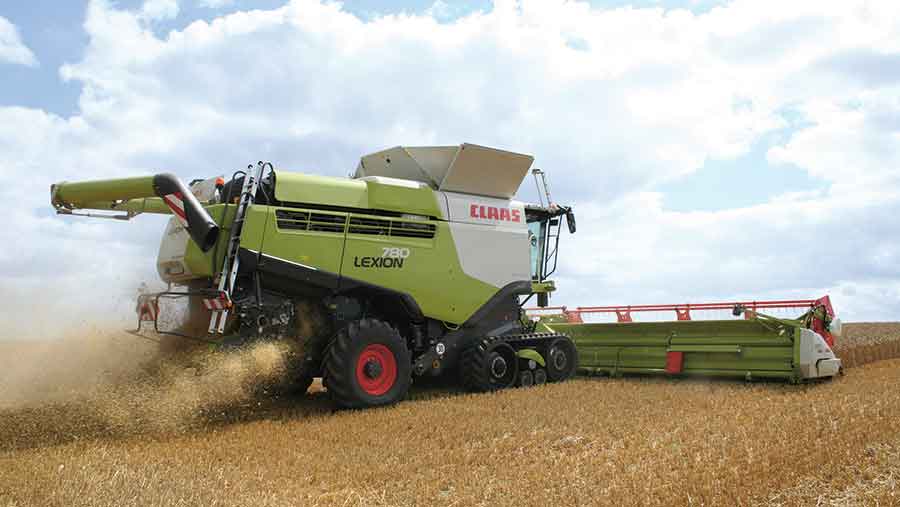 The Dynamic cooling-on-demand system introduced on the top two models so far is said to save up to 20hp while creating downward angled flow of air that helps keep dust away from key components.

Automatic speed control is a new option on Lexion 600 combines, using sensors on moniroing engine speed, the pre-threshing APS drum, impeller and straw chopper to react and alert the operator to a potential blockage.

The main benefit, says Claas, is that operators can push on more confidently to extract greater output from their machine.

Fan speed regulating Auto Slope Control introduces separate settings when the combine works up or down a slope, while automated sieve control constantly monitors cleaning performance and adjusts fan speed and upper and lower sieve opening according to a choice of four operator-set parameters. 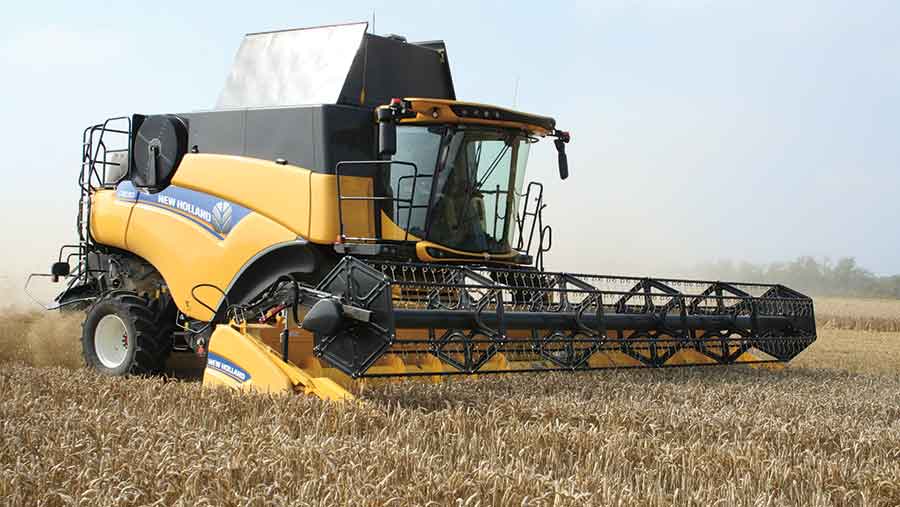 Latest-spec New Holland CR 8.80 is being showcased during a nationwide harvest tour. The machine is pictured here at TH White’s event in Gloucestershire © Peter Hill

The main purpose of opting for the 11-litre FPT Cursor 11 engine is to meet latest emissions requirements, which it achieves with AdBlue injection, but no particulates filtration

It also delivers a small power and increase – up from 490hp to 496hp – as a bonus that will help the twin rotor threshing and separation system cope with a fluctuating load.

Standard equipment for the UK includes the Dynamic Feed Roll drum that gives a positive feed of crop into the two rotors and the Twin Pitch rotor configuration.

This replaces the distinct threshing and separation sections of the previous design with short rasp bars progressively spaced further apart to stretch and thin the crop mat as it passes through the mechanism to encourage grain separation.

Sticky straw crops like spring barley can be held in the separation system for an extra rotation to help get the grain out using adjustable vanes in the top of the rotor housing.

Cleaning is handled by a grain pan and sieve assembly with separate drives so that more aggresive sieve movement can be introduced if required. 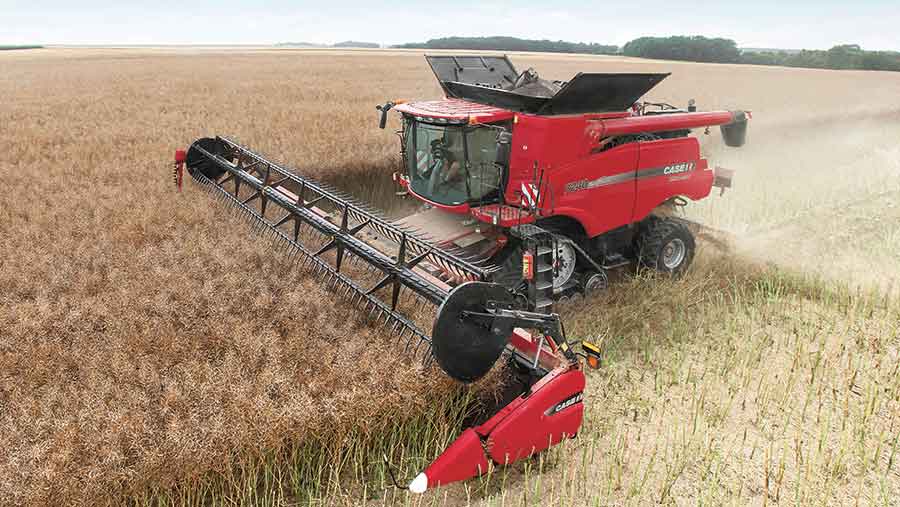 Improved straw chopping and spreading is the result of opting for Xtra-Chopping package being introduced for new and in-service Case IH 240-series Axial-Flow combines.

It uses the existing Magna-Cut 120-blade chopper, but with a Canadian-built Redekop MAV chopper added. This has separate chopping and spreading sections with 12-blade paddle fans generating maximum airflow of up to 180mph.

Almost two-thirds of the chopping blades’ rotation is within a shroud, which maximises their efficiency, and air is scavenged from the cleaning shoe, drawing the chaff into the chopper to mix and be distributed with the chopped straw.

The finely chopped material is said to be more easily ejected from the combine and blown down into the stubble across the full width of cut, an effect that is helped the airflow created by the paddle blades.

Also, stems are said to be split lengthways as well as across, making resides more easily incoporated into the soil with cultivation.