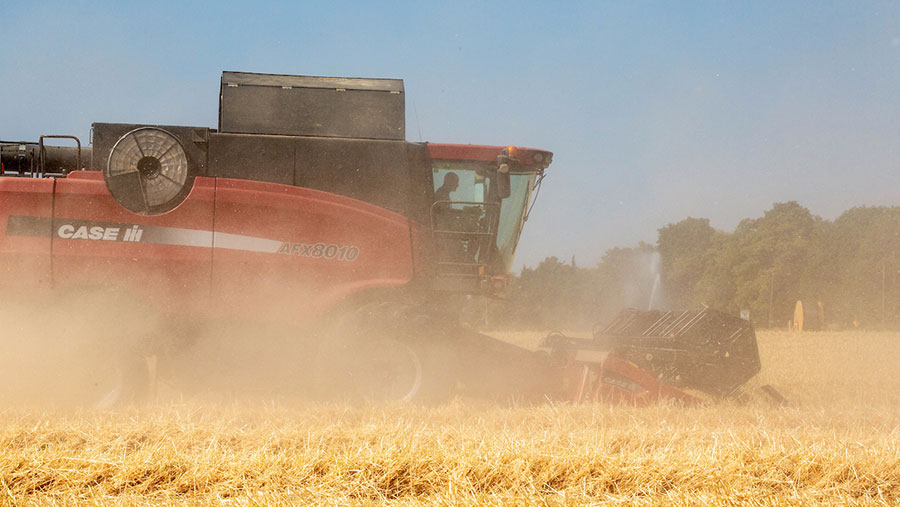 Bent drums, bashed augers and snapped straw walkers are just some of the common injuries that can bring combines to a lengthy standstill.

And with genuine replacements for these major items running well into the thousands, it can be a depressingly pricey business getting them going again.

However, for the past 20 or so years, Combine Fabs has been providing farmers, contractors and even main dealers with custom-built replacements for a fraction of the price of off-the-shelf items.

With so much experience under their belts, Michael Noquet and his team also pride themselves on the fact that they can iron out many of the niggles associated with some mass-produced original parts.

When Farmers Weekly pulled into the yard in late June the place was littered with twisted, snapped and generally knackered parts from combines old and new. We took a look around to find out what can and can’t be done and, crucially, how much it all costs. 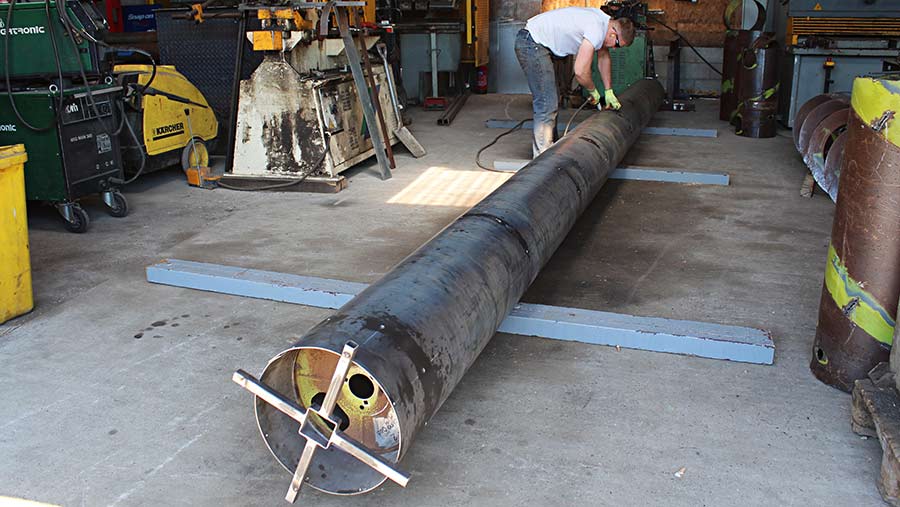 Stone-damaged table augers are a regular item in the workshop, including this 25-footer from a Claas Lexion being completely rebuilt by Mr Noquet’s son Matt.

The original had suffered so much stone damage that it was impossible to get it running true, so the only option was to fabricate a new tube.

As with all of Combine Fabs’ auger rebuilds, this was formed in sections on the company’s 8ft sheet roller before being welded up with the mig.

The openings for the retractable fingers and service hatches were then put in with the plasma cutter, before the original internals, bearing carriers and auger flights were refitted.

The price for this fabrication job (and any other headers up to 25ft) came in at about £2,200. Anything over 25ft costs about £2,400, but prices can be lower if there are just sections that need to be replaced. 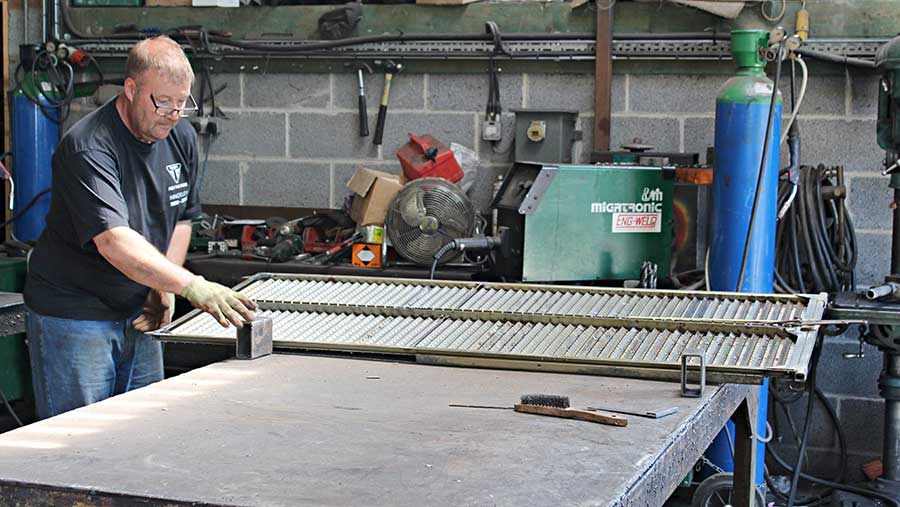 Sieve reconditioning is another of Combine Fabs’ staples, which Mr Noquet has been involved with since he started his career at Sieve Services.

The work required varies according to the brand, but can involve rebuilding and strengthening the frames, replacing wires or tacking in new frogmouth sections.

New Holland CR rotary machines seem to be among the worst for premature wear, and they tend to go on the ends first.

“They’re not that badly built, but there’s obviously a lot of vibration in the machine, particularly if the driver isn’t driving it to its full capacity,” Mr Noquet says.

Once the repairs have been completed, anti-rattle strips can also be added to prevent the pins shaking loose in the future.

The Claas sieve pictured is in mid refurb and has had the frame corners gusseted and a couple of new sections tacked in.

An average sieve costs £350 to rebuild (compared with about £800 for a new one) and minor repairs are charged by the hour. Some Massey Ferguson sieves require a little more work and run up to £425 apiece. 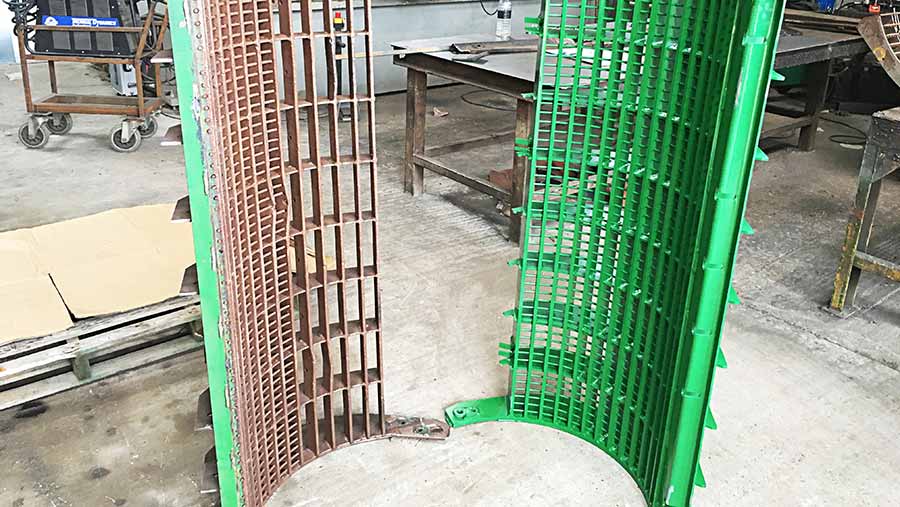 Drums are a particularly common wear item and after about 1,500 hours the rasp bars will be getting tired.

When they come in for repair, they’re stripped down and the centre shaft is removed. This is nearly always bent, so they straighten it out on the press before rebuilding it with new bars and bolts.

The final job is to properly balance the rotor. This is done on a dynamic balancing machine, which spins the assemble up to at least 800rpm. Weights are then added to get it running true.

Bent and worn concaves can also be brought back to life. If there’s not too much wear, the team will be able to simply straighten out the bars and thread in new wires.

But for units with more severe bends, the twisted sections are chopped out and replaced with new metal.

According to Mr Noquet, there is a limit to how much these can be repaired and it can be more economical to replace severely worn items with new. 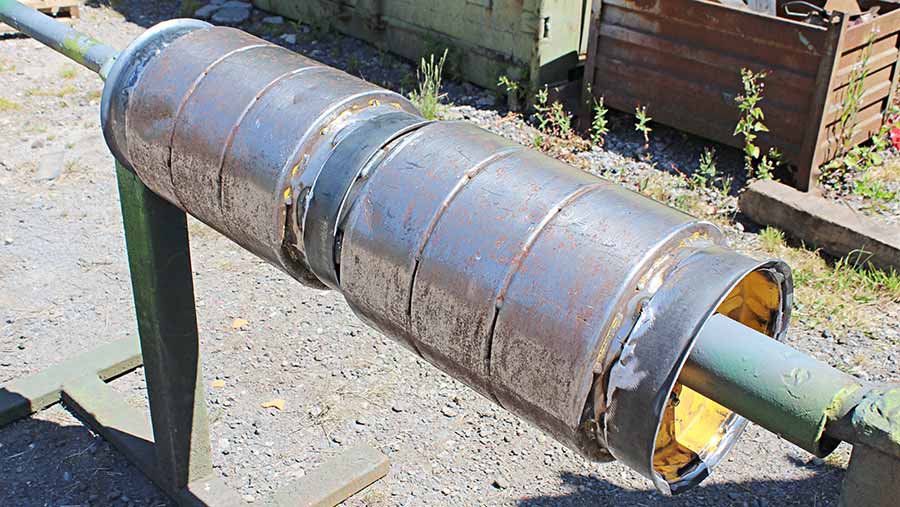 When they come in for repair, the tubing has generally worn through completely. The team will generally roll a new section of tube and a set of shims, before refitting the outer shields and bearing carriers and welding it back together.

The job costs about £500, which is roughly half the price of a new replacement. 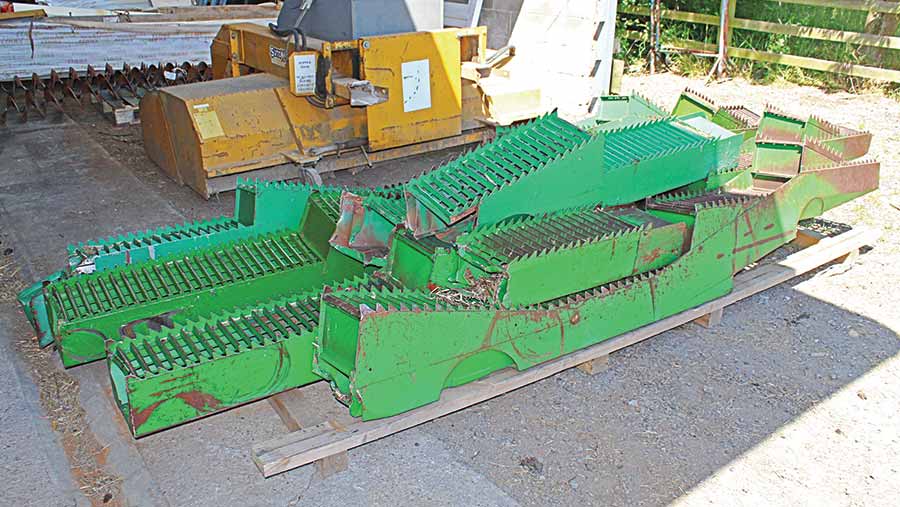 Blocking up straw walkers can often result in the sort of sorry mess pictured. These six units out of a John Deere 1188 have had the rear third completely sheared off after the blockage sensor failed to go off.

Refurb prices at a glance

They’re destined for a full rebuild and only the top grates will be reused.

To do this the team will carefully unpick the spot welds and use the old sheets as templates.

Thanks to a poor blockage sensor design, John Deeres from that era are apparently among the most common types needing walker repairs.

Prices for this service vary according to the complexity of the job, but start at £395.

Shaker shoe rebuilds used to be a common job, but as there are fewer older machines operating in this country Combine Fabs now does only a handful a year.

“Massey Ferguson 27s 29s and 31s were particularly horrible and we rebuilt a lot for those over the years,” says Mr Noquet.

That said, he still gets a few in from John Deere walker machines and is starting to get some units from higher-houred Claas Lexions.

The amount of work varies massively depending on the individual unit, with some needing relatively minor work and others requiring large amounts of new metal.

The most common spot for them to go is at the bearing mounting points. This is often made worse by people continuing to run them with a collapsed bearing. 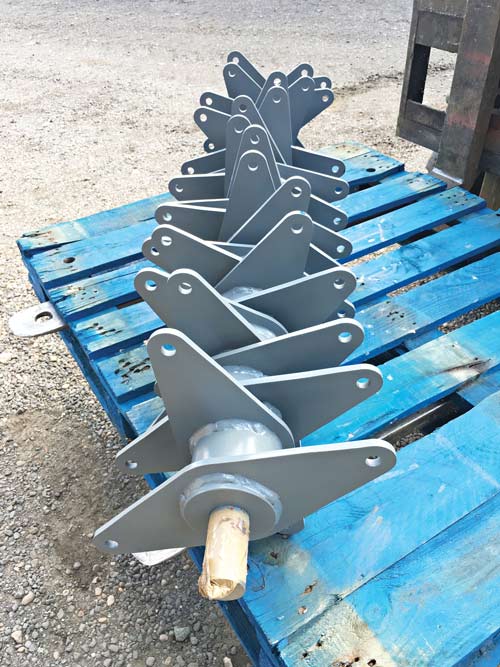 One of the company’s specialities is dynamic rotor balancing and the team can true anything from drums and hedge cutter rotors all the way up to rotary combine cylinders.

To do this they make use of two machines that were originally used in a paper mill to balance rolls of newspaper.

The smaller of the two can cope with items up to 2t in weight and measuring 2.7m long and 1.5m in diameter.

For larger items, such as flail mowers and combine rotors, Mr Noquet has just bought a larger version that can handle items up to 10m long, 4m in diameter and weighing up to 10t.

Using this machine to refurb and balance a Claas Lexion rotor will cost about £3,000, which is roughly half the price of a new one. 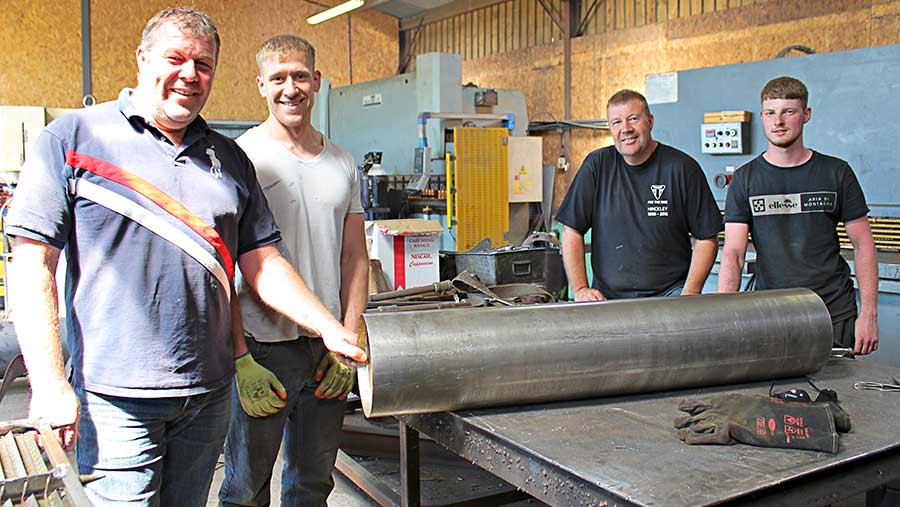 From left: Michael, Matt and Gary Noquet and Sam Roberts

Combine Fabs has been operating in the Nottinghamshire area since 1997 when Michael Noquet bought a yard and workshops from his former employer, Sieve Services.

At its height the business had 14 full-time fabricators working from its base in Long Bellington, refurbishing and manufacturing combine parts in the summer and building bespoke metalwork for the construction industry in the off season.

However, five years ago a couple of its larger construction clients went bust, owing thousands. This forced the then Combine Fabrications into administration.

Mr Noquet later re-launched the business as Combine Fabs and is working from new premises in Danethope Hill near Newark, Nottinghamshire.

The team consists of Michael, Matt and Gary Noquet plus Sam Roberts, with Gill Everson in the office.