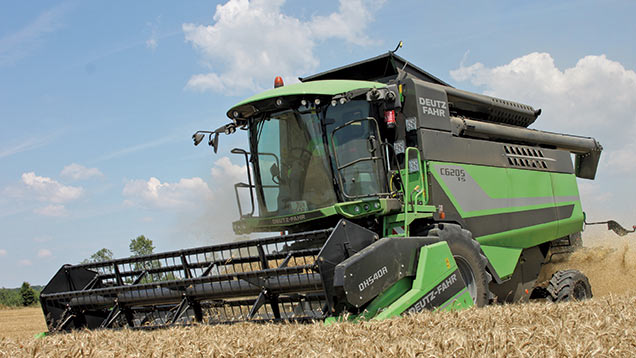 The latest maker to announce combine models this summer is Deutz Fahr (DF).

Its C6205 replaces not only the old 6040 but also the 6060, which means that the Italian-owned German marque has now done a full-range revamp.

The company makes around 400 combines/year at its factory in Croatia and the new model gives Deutz-Fahr a five-model line-up of five- and six-walker combines.

“Since the 6040 was introduced three years ago, it’s been a popular model for us in the UK, and was our second-best seller after the former flagship 6095 in our old series,” says DF UK’s Graham Barnwell.

“It was introduced in response to a resurgence of interest among smaller farms in renewing their combines, and at the time other manufacturers didn’t appear to be focusing so closely on this market, which played to our advantage.

“We’re now at the stage where some 6040 owners are looking to renew their machines, and the new C6205 brings many features of the larger C9000 and C7000 models, launched in 2013 and 2014 respectively, to this size class, allowing us to offer improved technology both to them and to owners of other small combines.”

Top of the tree in terms of upgrades is a new cab, which the C6205 inherits from its bigger brothers, replacing the 6040’s boxier design.

Called the Evo II Commander, it brings a full complement of electro-hydraulic controls that replace the old model’s mechanical levers.

These are primarily operated through an armrest-integrated joystick which will also replace the one used on larger Deutz-Fahr combines.

It groups switches according to key functions such as threshing system engagement, header adjustments and unloading auger operation.

There is now an improved passenger seat with a 21-litre portable fridge underneath.

The combine’s air-conditioning system has also been upgraded and the view to the tank has been improved with a bigger window.

The new cab sits slightly higher than the old unit, and the additional height has allowed a grain tank redesign which has boosted capacity from 6,500 litres to 7,000 litres.

Service access to the Deutz engine that sits behind it has been improved to make checkpoints easier to get at, while power remains the same, with 250hp on tap, driving through a three-range hydrostatic transmission.

In standard format the C6205 threshing system comprises a drum and concave followed by a beater, while Turbo Separator specification follows that up with a tined rotor, designed to improve separation of grain from green or damp straw.

It features 10 rows of fingers, with intensity of aggression adjustable mechanically over five levels of engagement.

Prices for the new machine are to be announced.