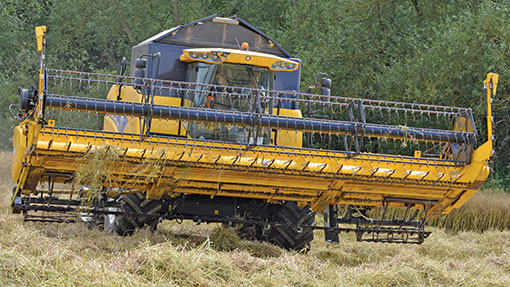 An unusual double-cutterbar combine header being used by a Midlands farmer is claimed to be able to boost harvester output by up to 15%. Nick Fone explains how.

For the past two harvests, Warwickshire farm manager Richard Ward has had prototype versions of New Holland’s twin-knife Dual Stream concept on evaluation. He believes the increase in workrates in UK crops is as much as three times New Holland’s official claim.

“We’ve seen output with our CX6080 go from 23t/hour to more than 35t/hour in wheat, and in rape the difference is even bigger,” says Mr Ward.

“By having one knife snipping off the ears or pods and only that part of the crop running through the combine, while the second cutterbar is chopping the stubble down to normal height, we’re cutting a huge amount more crop and the grain is coming off drier.

Dual Stream in a nutshell

“Every few years, combine manufacturers come up with an invention that ups harvesting capacity by a few percent – maybe up to 10%, possibly even 15%. But, in my book, never before has any invention ever increased harvester output as much as the Dual Stream header,” he says.

How does the concept work?

Up front, the standard knife cuts the crop eight to 15cm above the normal stubble height and this upper section of the plant passes into the combine in the normal way.

Then, immediately behind the header backplate, a second cutterbar snips the remaining straw off at a conventional height. This “double straw” is then left evenly-spread across the full working width of the combine.

The header itself is a standard version of New Holland’s conventional Varifeed table with sliding, hydraulically adjustable knife-to-auger extensions. The Dual Stream kit is then bolted to the rear of this. 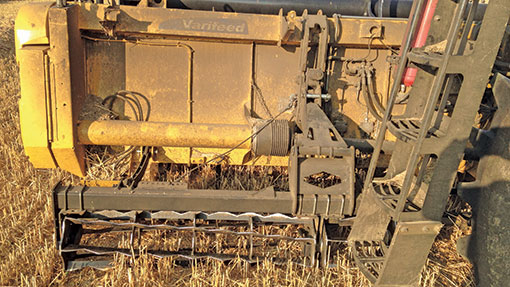 The secondary cutterbar is a self-sharpening, flexible knife usually used for reed-cutting on ditch-clearing excavator buckets. In work it floats on two cage-rollers on the outer extremities of the header and mini-skids in the centre section.

A hydraulic linkage arrangement is used to hoist the whole apparatus to header floor height for transport.

The cage-rollers serve two purposes: controlling dual knife height and pushing the double straw to the ground so that it does not interfere with subsequent cultivations. The roller does not run across the full width of the header because big tyres (and tracks) need clearance behind the backboard. 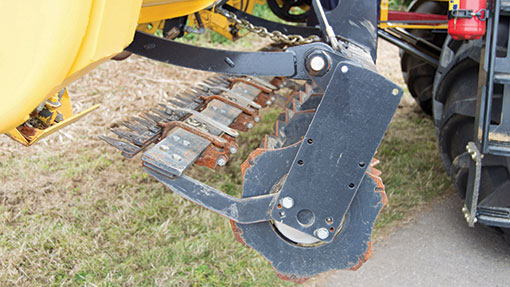 With the wheels rolling in the double-cut straw and the straw chopper providing a downward blast, Mr Ward believes there isn’t the requirement for a central roller.

What’s the point of it?

By channelling 15% less material through the combine, New Holland reckons to boost harvester output by up to 15% and see an equivalent drop in fuel use for every tonne of grain harvested.

Trials at Mr Ward’s farm over the past two years have suggested the increase in output is probably closer to 50% and fuel use is slashed by more than 30%.

“By cutting the amount of material running through the combine by 15%, you’re massively increasing the grain-to-straw ratio so  the various threshing and separation components can work more effectively,” he says.

“The reduction in volume of material also results in a much greater increase in throughput as it’s only the upper portion of the crop you’re cutting. Obviously it’s the driest part and so it threshes more easily.

“You get a drier, cleaner sample and you’re able to get going earlier in the day or until much later at night because it’s generally the lower section of the stubble – no longer going through the combine – that holds the dew.”

In contrast, with both knives cutting at normal height, capacity dropped to 25t/hour – the same rate usually achieved with the farm’s conventional 6m (20ft) header.

With the height differential increased to 25cm for oilseed rape, there is a far greater reduction in the volume of material passing through the combine, with the result that workrates in a crop yielding 3t/ha (1.2t/acre) jumped from 1.7ha/hour (4.2 acres/hour) with the conventional header to more than 3ha/hour (7.4 acres/hour) with the double-cutterbar table – an increase of 76%.

What had to be changed on the combine?

Mr Ward’s CX6080 required an additional maize header pto drive to be fitted on the right-hand side of the straw elevator to provide power for the second knife on the Dual Stream header. It is reckoned to use about 4hp.

The hydraulics to raise and lower the knife and roller to get the header on to the trailer for transport were then plumbed into the Varifeed table extension circuit with an electronic diverter valve sending oil in the required direction.

In work, with 15% less straw going into the combine, the flow of material through the various threshing and separation elements is very different.

“While walker losses were always the limiting factor for us previously, that’s no longer an issue,” says Mr Ward.

“It’s now the sieves that are under pressure. They have to be set up to work at maximum capacity so there’s more wind and they’re opened wider – typically 20mm on the top and 15mm on the bottom for wheat.”

How does it handle laid crops?

“Where cereals have gone flat, you drop the main cutterbar all the way down to just above the ground and it runs just as a conventional header would,” explains Mr Ward.

“Where the tramlines have been run down in desiccated oilseed rape, you tilt the header over so that it picks up the lower pods on the plants pushed over between the wheelings. Because the rear knife can flex and floats on the outer cage rollers, it maintains an even cut regardless of the header angle.”

There is also less risk of stones and other debris making their way into the combine and causing damage thanks to the higher cutting height of the primary knife.

The secondary digger-bucket-derived cutterbar is almost immune from damage because of its irregular knife spacing, which makes it very difficult for stones to jam in it.

Those who bale their straw will see bale counts drop by about 15% – equivalent to the reduction in material passing through the combine.

But Mr Ward points out that the straw lost – the bottom 10-15cm – is always the wetter, greener material, leaving the driest, most absorbent straw for bedding. Therefore less should be needed.

When will it go on sale?

Having proved the concept, New Holland plans to test the Dual Stream kit on bigger headers up to 12.5m (41ft) next season. If everything goes according to plan, it is hoped the new cutterbars will go on sale in the next couple of years.