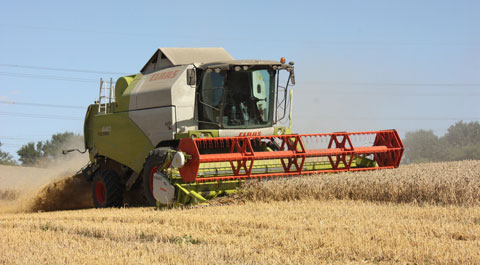 Until 2000, MF red had been the colour-scheme of choice at the Cousins’ family farm in Essex. But having had some bad experiences with an ultra-unreliable MF34 combine, Nick Cousins looked at his other options.

“We plumped for a five year-old Claas Dominator 204 because it had a good reputation and was what our local dealer, Crawfords, was selling at the time,” he explains.

“It proved one of the best machinery purchases we have ever made and in eleven years we never had a major issue.”

Why the change? “The drum and concave were getting worn and every year the list of winter maintenance jobs grew – we knew we were heading for some big bills.

“We looked about for some second-hand machines but when you compared them to the price of a new combine, it didn’t make sense.

“The deal was good so we bought a new Tucano 440 on the basis that we would still be looked after by Crawfords even though they no longer hold the Claas franchise. The last time we had a new combine was in 1956 when dad bought a brand-spanking Allis Chalmers pull-type harvester.”

Since switching to the Tucano trailers certainly seem to come off the field quicker, says Mr Cousins. “The straw chopper also does a really good job and because there’s plenty of engine power it doesn’t seem to affect output as the old one did.”

There have been a few problems with reliability however. Initially a leak developed where the hydraulic reservoir hadn’t been sealed properly and then last year the main variator drive-pulley bearing went as well as several smaller straw-walker bearings.

The Vario cutterbar is brilliant though, says Mr Cousins. “Previously you could get into a perfectly good crop of rape and it just wouldn’t feed in the front. Being able to alter knife-to-auger distance has made all the difference – we haven’t had crop flow that good since the old Massey Powerflow table.”

“But the cab isn’t the leap forward we had expected. It’s noisy despite the engine having migrated to behind the grain tank and I can’t believe for something well over £100,000, there is no cupholder.

“That said the controls are easy to use – being able record crop settings is great and things like automatic reel speed adjustment just make things so much simpler.”