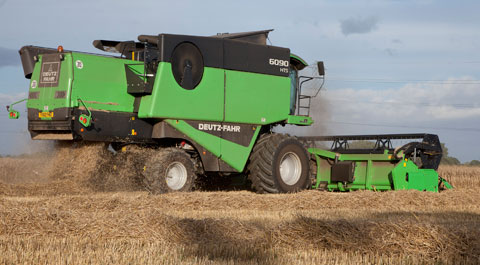 With 280ha (690acres) of his own crops to cut and a further 500ha (1235acres) of contract combining, North Yorkshire contractor Richard Burniston needs plenty harvester capacity.

“It might seem like a bit of a luxury to run two combines on our acreage but we need to keep our customers happy at the same time as getting our own crops cut.

“And by running two very different machines we can cater for different crops and varying terrain.”

As its frontline harvester, the business has a Claas Lexion 570TT hybrid rotary which is used on the flattest ground and, because it is tracked, where soil compaction could be an issue.

Alongside that, there’s a Deutz-Fahr 6090 HTS which, being a ‘Balance’ hill-side model, is put to work on slopes and banks.

With good back-up from local dealer Hardwicks at Scarborough, Deutz Fahr combines have been a familiar sight at North End Farm for almost 30 years.

“We liked the original Deutz combines for their mechanical simplicity. The air-cooled engine had the hydro drive at one end and the drive for the threshing gear at the other. And of course there were no radiators to worry about blowing out.”

Last year the two-year-old 5690 was swapped for the 6090 which, equipped with a 7m Biso Crop Ranger header, was hoped to be better at handling laid and tall crops.

“That’s about 10t/hour behind the Lexion which is amazing given the difference in the size and power of the Deutz.

“This new machine is about 20% faster than our old 5690. On a good day we’d be covering 20ha before whereas we’re easily up around the 26ha mark now.”

Running at that sort of throughput the 6090 is generally guzzling between 11.5-litres/ha and 12-litres/ha (4.6 to 4.9-litres/acre), swathing straw. As an average across the season that has worked out to be around 1.6-litres per tonne of grain harvested.

Certain features come in for particular praise such as the three-piece concave, the returns set-up and the unloading auger.

“Being able to slip the concaves out through the stone-trap without having to pull off the intake elevator is great.

“The turret unloading auger was another big plus point, as is the returns system. There are no elevators, just the re-thresher which throws the returns back onto the sieves across the full-width, not just on one side.”

The extra threshing rotor of the optional HTS system is reckoned to boost output by up to 20% when compared to a standard machine – something Mr Burniston noticed when he switched from the original 1630 to the 4075 HTS.

Rams on the front axle provide whole body levelling for the ‘Balance’ slope compensation system which he believes is much improved on the new machine.

“Auto-levelling is now much more responsive than before and means we don’t lose any output. On our banks we used to have to slow right down to limit losses – now we just keep going at the same speed as on the flat.”

Why a Biso header?

“Having had the experience of Claas’ Vario header on the Lexion, we wanted that facility on the Deutz,” says Mr Burniston.

“Being able to set the cutterbar out just that little bit means that everything runs in head-first. But the one weakness is that the knife is over-serrated so that in weedy crops grass can tend to hang on and you have to use the reel to pull it off.

“It’s a great luxury to be able to alter the knife position but I’m not sure we’ll be able to justify the expense on the next machine we have. Anyway this one’s got to last us another ten years.” 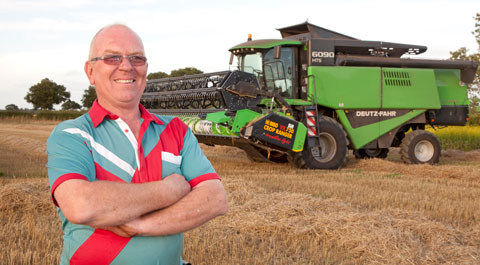