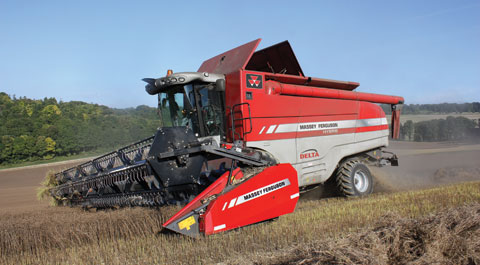 Up until last year an eight-walker Massey Ferguson Centora 7274 had been the tool of choice at Compton Manor Estate.

But having cut 560ha (1400acres) faultlessly for five seasons, the time was right to update to a new higher capacity machine.

“The old combine was brilliant for what it was – it wasn’t too hard on the straw and its capacity matched our acreage perfectly – in a dry year,” explains Andrew Day who manages the estate.

“But with several wet harvests under our belt and grain drying costs mounting, we felt a bigger machine would buy us a bit of extra capacity so that we could afford to cut only when the crop was dry enough.

Duly a Claas Lexion 760, a John Deere S690i and a New Holland CR9090 arrived at the farm to prove their capabilities.

“We had some tricky conditions here in Hampshire last year and, being true rotaries, the Deere and the New Holland struggled with damp, green straw and couldn’t get close to the outputs we – and the demo teams – expected.

“Having 35ft headers did them no favours as they were shoving a huge amount of wet crop through. That, in combination with the straw choppers, dragged the engines down and the spreaders struggled to cover the full width.

“In contrast, with its 30ft header, the Lexion seemed to handle the tricky conditions much better and that convinced us of the twin-rotor hybrid set-up and that a wider header didn’t necessarily lead to more output.”

Although this seemed like a done-deal, Mr Day was still keen to explore the other options before making a decision. With much of the farm’s other kit supplied and looked after by Massey dealer Romsey Ag, he was keen to hear about what they could offer in the high capacity harvester stakes.

A few production versions of MF’s new Delta hybrid had been running in the UK last year and, having spoken with those operators, even without a demo Mr Day was convinced that it could be a potential runner.

“The deal Massey put together was good but wasn’t the cheapest. But having seen how the rotaries performed in the wet, I knew we couldn’t go down that route. The Claas was really impressive in the field but it was expensive.

The Delta seemed a good compromise and the cost of ownership looked reasonable.

“We needed extra output to insure against further wet harvests and to avoid cutting wet corn. The hybrid concept certainly ticked that box.

“We were already familiar with Massey combines and liked the cab, Powerflow headers and straw chopper which we know gives an even spread. This helps with our direct drilling system.

“Going to a relatively unproven machine such as the Delta may have seemed like a gamble but I could only do that because I have absolute confidence in our dealer.

“The support we get is fantastic – they have a dedicated combine engineer who will drop everything and come running if we have a problem.

The AutoLevel (AL) version was seen as a necessity given the rolling terrain of the estate, although the smaller grain tank is seen as a disadvantage.

“We got off to a tricky start simply because the rotors had been assembled incorrectly.

That needed sorting but both MF UK and Romsey Ag were brilliant. We had a replacement machine within 24 hours and an engineer flew out from Denmark to sort our combine out.”

“That’s when we saw the benefit of AutoLevel. The stand-in Delta was a flat-land machine and the moment we got onto the banks we had to slow up to stop grain going over the back. You can see definite stripes where it ran.”

With their own combine back up and running within several days the Compton team were able to see its true potential. In 10t/ha (4t/acre) crops of wheat the Delta averaged 60t/hour, matching the output of the Lexion 760 trialled last harvest.

“Fuel use is the most noticeable thing. The rotaries we demo-ed last year were using 100-120-litres/hour as they struggled in the damp crops. Now with the Delta we’re using 40-50-litres/hour. That’s only 10-litres more than our old walker machine and yet we’re covering the ground almost twice as fast.

“However we do have the AdBlue cost on top of that which works out at about 2litres/hour.

Part of the big combine’s frugality is put down to that fact that its seven-cylinder Sisupower-plant is rarely put under pressure.

“The other machines we tried last harvest all seemed to struggle when they started unloading on our steep banks – the Delta barely notices it.

“That mirrors our experience with the Sisu engine in our Massey tractors and out going Massey combine – they just seem to have so much low-end grunt.”

Having had Massey’s trademark Powerflow header on the previous combine, driver Peter Jarvis is convinced by it.

“It’s just brilliant the way the crop falls onto the belts – it can’t help but feed in head-first which means it all goes through the machine that much smoother,” he explains.

“It gives the opportunity to spot big stones and avoid picking them up. There’s no need to alter anything when we swap from wheat to rape and the extra high-level auger means tall crops don’t run back over the top.”

Simplicity is another big plus-point in Mr Jarvis’s eyes. The straight-forward layout of the threshing system is easy to access and clean – it doesn’t accumulate dust like the previous straw-walker set-up. It’s the same story in the cab which scores highly for cab for its simplicity and lack of over-complicated computer controls.

“Most importantly for me I’ve got a comfortable, reliable machine that will cover the ground twice as fast as before which means we rarely have to work past 10.30pm and we’re not pushing the combine or the dryer to their limits.” 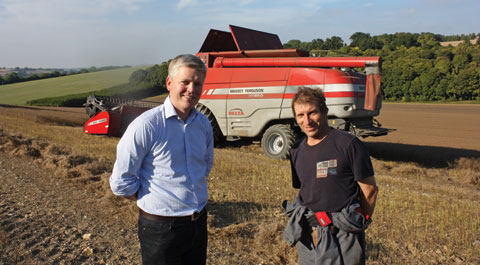