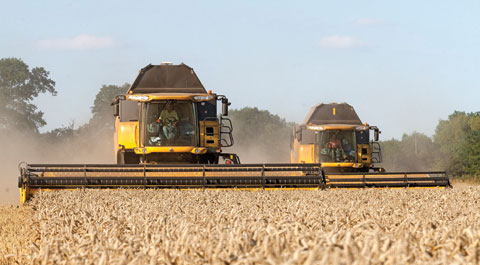 With plenty of ground to cover in both Warwickshire and Leicestershire, R&T Ensor’s arable operation has always employed a ‘two-combine’ strategy to make sure everything gets cut in good time.

“We could probably just about harvest our entire acreage with one monster combine in a good season but we choose to run two slightly smaller machines alongside each other to guard against breakdowns and give peace of mind that we’ll be able to get following crops in the ground promptly,” explains farm manager Ken Grimsdell.

“The 980 was due for swapping and we really wanted to start running two identical combines because of the interchangeability of parts and the compatibility of software for precision farming technology to allow us to get closer to controlled traffic management.

“Over the last four years we have converted our grainstores to drive on ventilated floors and we wanted to match combine capacity to that.”

“In addition, we wanted to run a pair and two 9070s match our acreage.

“In my book, they have an ideal combination of grain tank capacity, engine power and working width to provide the output we require.”

“I have had a lot of experience of yellow combines and I know they’re tough, robust machines. You could drive them into a telegraph pole and they’d keep going,” says Mr Grimsdell.

“We looked at other makes but ultimately the decision came down to back-up. Warwick New Holland dealer Murleys give us superb service.”

Fitted with AdBlue-equipped Tier 4 Fiat engines, the new machines burn diesel at a rate of 20-litres/ha (45-litres/hour) when chopping straw. This compares with the old CR9090 and 980 which would typically consume 25-30-litres/ha.

AdBlue usage works out at around one litre for every 25-30-litres of fuel burnt. (Approx one fill for every 3-3.5 tanks of diesel).

“Having cut 410ha of oilseed rape, 400ha of wheat and 120ha of spring barley, we’ve only had one major breakdown – a bearing on the main intake elevator. It meant changing the whole shaft but we were back up and running again within five hours.”

What about the Varifeed header?

“We tried a Biso VX header on the 980 which worked well but was very heavy. On the 9090 we had one of the first of New Holland’s own Varifeed tables but it had some major issues and it ended up getting replaced with a beefed-up, redesigned unit.

“These new ones feed well and are easy to operate. Our drivers are constantly tweaking the knife-to-auger spacing to match crop height and maximise crop flow.”

“We’re trying to move across to some sort of controlled traffic system so we’ve matched the 9m headers with a 9m Dale drill which all fits with the 36m sprayer and spreader.

“But ultimately we have to try to minimise our footprint on the ground and so we went for tracks with the new machines.

“They’re definitely good for compaction but, without suspension, they’re pretty unforgiving on the road and on rough ground and will probably be more expensive to maintain. The jury is still out as to whether their cost can be justified.”