A large output when crops are at their driest was key for Dorset farmer James Reed.

After doing his research, the hybrid arrangement of the John Deere CTS was the system of choice when it came to upgrading the harvester.

After the old combine’s shaker shoe broke up, the farm was forced into changing, and a CTS 9780i arrived in the yard for the oncoming harvest.

Five years later, we see if the machine has proved itself and if the hybrid system is still the right one for them. 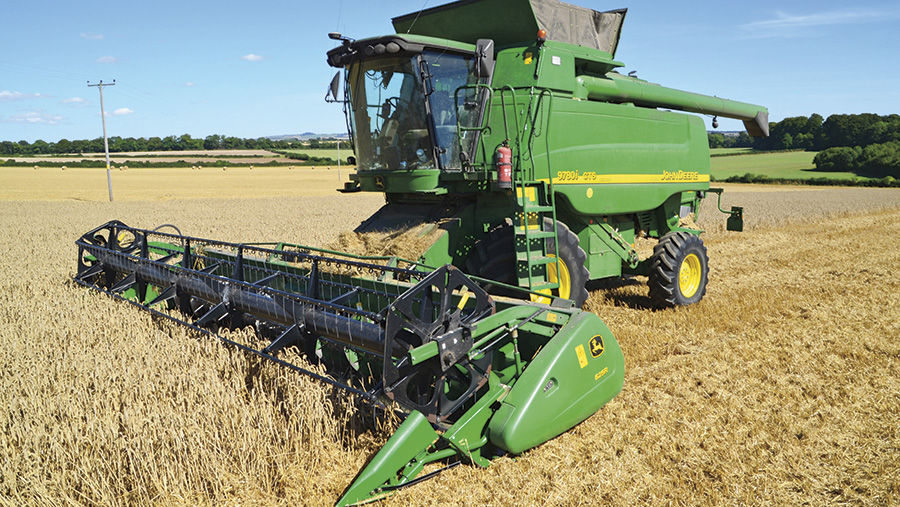 Why a John Deere CTS?

“It had injector issues and the shaker shoe broke up.

“We took that as a sign there might be more trouble on the way so we decided a change was sensible.

“We wanted extra capacity to cut crops at their driest and the CTS’s combination of a conventional drum up front with twin rotors in the rear offered that – it’s pretty much like a Lexion in design.

“The big advantage was that Deere offered full-body levelling with the HillMaster, which could make a difference on some of our steeper fields.”

What’s it capable of?

“In good standing wheat the CTS will easily churn out 30-35t/hour. When we’re chopping straw it drops back a bit – the main limiting factor is power.

“In damp, green straw we deliberately slow up to make sure the crop is properly threshed, just as we would with the old straw-walker machine.

“In fact, straw quality is never an issue – we’ve never once had a complaint from baling contractors and keep some straw for our own livestock.”

Is the chopper any good?

“The chopper runs all the time whether you’re swathing or chopping.

“That way whatever comes off the chaff pan gets spread to the full width which makes good sense.

“When we channel the straw through it, it generally makes a good job and being able to adjust the left-to-right bias from the cab is brilliant in avoiding material being thrown into the next bout of crop.”

“Although there are standard crop settings, Hunts also issue recommendations tailored to our local area which are generally bang on.

“They are incredibly knowledgeable on how best to set up a CTS – I can just phone our fitter and he will talk me through most things over the phone.”

What did it cost?

“Hunts had a choice of machines they had maintained and that really gave us confidence.

“We then spent a further £7,500 on a nearly new Zurn rape extension and side-knives.

“It’s dead easy to fit – four over-centre latches, a couple of skids and a belt.

“Cutting rape with it is much easier, with the extra table depth allowing more use of the reel than usual.”

“It came with a full service history and we get Hunts to do a major service each year so we hope they’ll pick up on anything we don’t see.

“That seems to have paid off as we’ve had very little go wrong over the past five harvests.

“Initially we had some issues with an oil pressure sensor but the parts came overnight and we were up and running the next day.

“This season we’ve had a threshing sensor play up but it hasn’t stopped us.”

“I really like the CTS concept – it’s such a shame that Deere doesn’t build them any more.

“We get the output and, despite it using rotors, it keeps going in the damp.

“For now everything is running fine and we’d expect to easily get another couple of years work out of it.

“We’ll probably swap it in eventually for a fresher version of the same thing – something like a C670i if the right machine is available.”