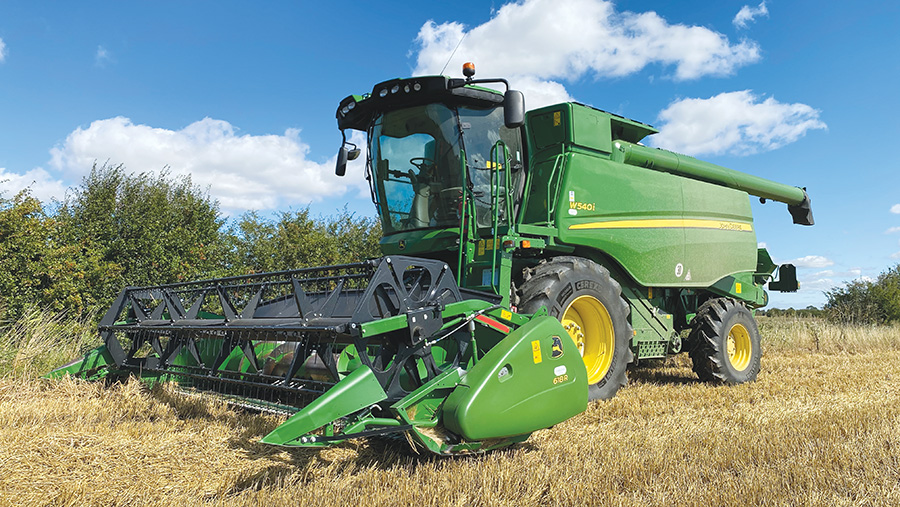 We get the lowdown on the John Deere W540i combine run by Lincolnshire farmer Mathew Caudwell.

We find out why his chose the JD W-series and how it has performed over the last three years on his heavy land.

What made you choose a John Deere W-series?

I picked the dealer – Doubleday – as much as the combine, particularly as I work alone and depend heavily on decent back-up.

The farm’s last combine was a John Deere 1188 Hydro 4 and it served us well but, when that got tired, I ran a New Holland CX8070 in partnership with my neighbour for a few years.

He eventually took on more land which meant I wasn’t always able to harvest my crops when they were ready – something that is particularly important as I have no drying facilities.

That’s when I looked into a replacement. I got a quote for a six-walker CX from New Holland, but it wasn’t cheap enough to put me off the Deere.

I also liked the fact that the W-series has plenty in common with the old 1188 and, behind the new panels, many of the working components look very similar.

Doubleday quoted me about £180,000 for the W540, which is a lot for a five-walker combine with an 18ft cut, so I softened the blow by going down the contract-hire route.

Taking a five-year plan means all my costs are fixed from the outset and I won’t have to soak up any more expenses should something go wrong.

I could have spent less than £100,000 and got a relatively low-houred used machine, but several of my neighbours have done that and often get held up with breakdowns at harvest – a risk I can’t afford to take.

Mine is a pretty highly specced “i” model with Autotrac steering, JD Link and Harvestdoc crop recording.

I already have RTK guidance on my 6250R tractor and run a semi-controlled traffic system – hence the 18ft header – so it means I can confine any compaction to the same wheelings each year.

From Doubleday’s point of view, the higher-spec machine will also be easier to sell at the end of my term.

It’s now in its third year cutting 250ha annually and, so far, has been pretty trouble-free.

Having said that, it’s hardly been pushed to its limits this season. The oilseed rape crop was particularly bad and, with some yields down at 1.7t/ha, I won’t be growing it again.

The one notable problem I’ve had was a design fault with the long, thin belt that blows AdBlue into the exhaust, which didn’t have enough idlers and tensioners to keep it taut.

Although it ran fine on tickover, as soon as the revs were cranked up or the going was tough, it started flapping around before flying off, causing an immediate power restriction.

However, John Deere revised the pulley arrangement and added tensioners top and bottom, which has done the trick.

The only other irritation is the Greenstar system. In my opinion, it’s the best on the market, but it can take an eternity to wake up at the start of the day.

The biggest letdown is the paintwork, which has peeled and flaked on the steps, exhaust and a few small metal panels.

I don’t think it’s a problem confined to Deere and I’ve seen the same issue on my Dieci telehandler and some New Holland combines. 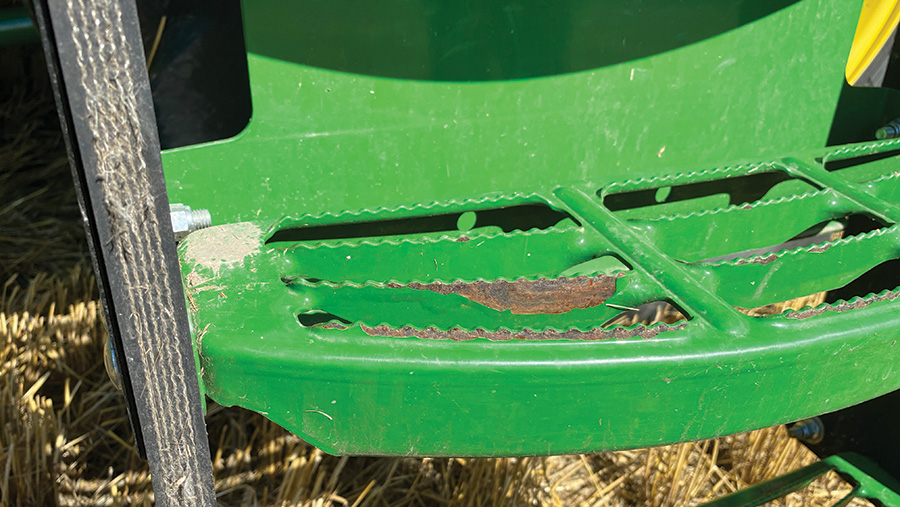 Paintwork has peeled on the steps © Oliver Mark/MAA

It’s down to the way manufacturers jet-cut the sheets, which leaves a perfectly finished edge that paint doesn’t seem to stick to.

It’s a petty complaint, but makes the combine look untidy and puts me off buying it at the end of my hire term.

The grain sample is as clean as anything I’ve seen and it’s unbelievably easy to set up. Deere’s guideline crop settings provide a pretty good starting point and the only time I stray far from them is in particularly short cereals that require hard threshing.

Losses on any straw walker combine can peak and trough, but I tend to find the header is the worst offender in barley. The threshing system manages to get rid of most of the awns without cracking the grains.

Wheat losses are usually over the walkers rather than the sieves but, generally speaking, it does a really good job.

My lack of drying capacity benefits the sample quality because I can’t cut anything when it’s not fit and always aim to be within a couple of percent of the target moisture.

If it was a major issue, I’d rather go to a bigger combine than get involved in the rigmarole and expense of running a dryer. I always think it’s an insurance policy that tempts people to go cutting at the wrong times.

Almost all of the pea, barley, wheat and oilseed rape straw is baled. Because of the big separation area on the W-series, Deere doesn’t fit a multi-drum system that would beat up the straw a bit and take more power to run.

A local farmer buys it in the swath and tells me it’s some of the best straw around – nearly always full length and looking almost untouched.

I only chopped one field last year, although there will probably be a bit more this season because the crop is so short.

The combine has more than enough power for our flat ground, but I’d probably go for the bigger W550’s 300hp engine if I was on hilly land and unloading on the move.

Baling the straw gets rid of most of the trash so, aside from a bit of rotational subsoiling, I go straight in with a Claydon stubble rake. It’s the only cultivating I do and has saved hundreds of autumn hours on the tractor seat.

It bugs me that John Deere is no longer offering the W-series in Europe.

I can see why it has stopped selling the rebadged Sampos but, in my opinion, focusing purely on the big stuff is a short-sighted move, particularly as it will still make them for other countries in central Europe.

With so many high-capacity combines now on the market, it’s going to make modestly sized second-hand machines harder to come by.

I haven’t yet decided what to do at the end of my five-year term. I could buy this one, but its low hours will make it expensive and I’m likely to encounter more mechanical gremlins as it gets older. That means factoring in the possibility of unexpected bills.

The alternative is to go for the bigger T550 if it is available for a decent contract-hire price. It’s not a whole lot different to the W, but the extra threshing drums ahead of the walkers would allow me to push on a bit more. I’d also look at better tyres or tracks to spread the load.

Either way, I’m not interested in upping the acreage to make it pay – I want a machine that suits the land I farm now.

Where it fits in the W-series range

John Deere recently announced major changes in the lower reaches of its combine line-up, culling the three Sampo-sourced models it sells and the rest of the W-series range.