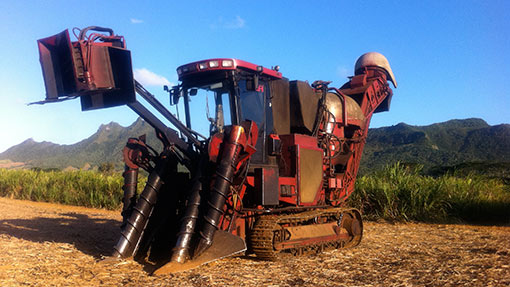 The earliest sugar cane harvesters date from the 1920s and a single machine could replace up to 100 labourers. In Australia, mechanical harvesters first appeared in the 1950s and were harvesting 85% of the crop by late 1960s. Today that figure is 100%.

However in places like India, where the terrain is too rough, the crop is still mainly harvested by hand.

Sugar cane is one of the most efficient photosynthesisers in the plant kingdom but requires 60cm of water a year. It can be harvested continuously for up to 10 years but three years a is an average lifespan.

An average yield is 70t/ha (pretty much the same as for sugar beet) but this can hit 170t/ha in a good year. The biggest producers are Brazil (74m tonnes/year), India (342m tonnes/year) and China (115m tonnes/year).

Mechanical planting of stems or billets has also become common in developed countries. However sugar cane leaves the land in a pretty rough state and serious horsepower is needed to bring the land into order.

Harvester drivers have quite a lot to do. A powered divider separates the tangle of cane to be harvested, while a topper cuts the tops off canes that can reach up to 3m high.

The divider also has a share that allows the cane to be cut very close to the ground. 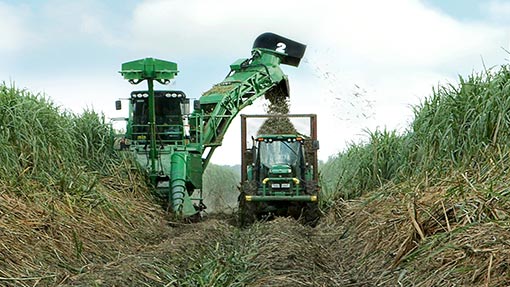 Discs cut the cane at its base before a drum (similar to a forage harvester) slices the cane into billets 25-30cm long. An elevator then takes the billets to a primary extractor (blowing unit) to separate out trash, before sending them along the unloading elevator where a secondary extractor is at work.

The elevator can swing through 180deg to allow unloading on either side into trailers or chaser bins. No further processing of the billets takes place until they reach the mill.

Steel tracks are preferred for hillier or rougher terrain, while tyres have lower running costs and allow faster movement between locations. John Deere’s 3520 or Case IH’s 8000 series come in either configuration.

Recent developments include an improved flow of crop into the drum, GPS steering, lower revving engines to save on fuel and greater use of automated controls. Sounds familiar, combine owners?

Getting the crop off

Sugar cane producers face the same logistical challenges as beet growers, namely how to transport large volumes of material quickly to avoid sugar loss by transpiration. Chaser bins that tip into lorries or tractor and trailers are commonly used and hand-cut cane is loaded by grabs.

South African company Bell produces a three-wheeled machine, which has become very popular due to its agility and simplicity.

Traditionally, fields were set on fire to get rid of the huge quantity of leaves before cutting by hand or mechanically. But environmental legislation is forcing this practice out, hence the need for high-output harvesters and efficient separation. 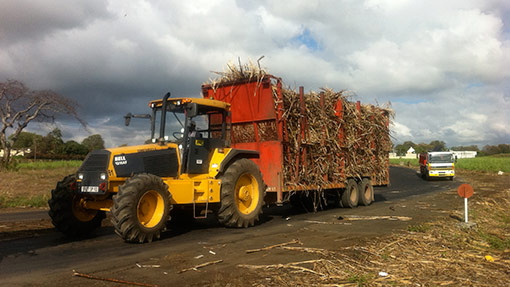 Almost all sugar cane harvesters are single row or have two narrow rows, although Louisiana maker Cameco (bought by Deere a few years ago) did develop a full-width two-row machine. Harvesters cost about £250,000.

John Deere’s 3520 spec includes a 337hp 9.0-litre powerplant and the autosteer guidance system. The latter keeps the harvester centred on the row with a width of 1.4-2m. Output is up to 120t/hour compared to hand harvesting, where 1t/hour is considered speedy.

Though the market is dominated by John Deere and Case IH, Agco recently bought a majority stake in the Brazilian maker Santal Equipamentos.

Any chance of seeing one in the UK?

Two machines were imported here for cutting miscanthus for the bioenergy sector but turned out to be unsuited to UK conditions.

JCB, however, has strong sales in the sugar cane sector. Its excavators are fitted with grabs for whole cane loading, while Fastracs haul trailers to the factories and loaders are used for feeding the mills.