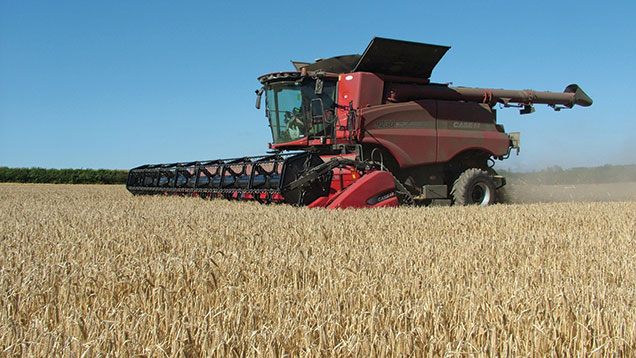 Two years ago we picked seven different makes of two-year-old combine and got a warts-and-all report from their owners and drivers.

We’ve repeated the exercise again this year to see how well the same machines got on. We previously tested the New Holland, Massey Ferguson, Deutz-Fahr and Sampo. Now we will cover the Case, Claas and Deere.

What is its workload and how many hours has it done now?

“Over the past few years the 9230’s workload has diminished slightly with more land being turned over to feedstock crops for JV Farming’s anaerobic digester.

“The total acreage extends to some 1,740ha, two-thirds of which is down to combinable crops, the remainder growing forage maize and rye for the AD plant. Having previously run two combines, seven years ago the decision was made to simplify harvest by moving to one large machine.

“With this year’s thick crops the Axial Flow was managing between 36.2t/hour and 37.8t/hour swathing straw.

“Those figures do not look that impressive but they are a true picture of what happens on the ground taking into account the downtime for field changes, knife-section replacements and similar.

“In the same vein, the Axial Flow is able to keep running for similar hours when compared with the other twin- and single-rotor machines that have been trialled at JV over the years.”

This year’s harvest was our most trouble-free yet. But that’s not to say the Axial Flow has not had its issues. Last year we had a recurring fault with shear-bolts snapping on the unloading auger drive.

“Initially, we cut back the plastic chute on the end of the auger to make sure it wasn’t creating a bottleneck and generating too much back pressure.

“When that didn’t work Case changed the auger drive sprockets, which seemed to solve the issue.

“It was the discharge spout that caused the second major headache last year.

“Electronic actuators are used to fold the auger around the tail of the machine to make sure it does not get hung up in trees.

“However, sporadically they would misbehave and wouldn’t fold round for unloading – that issue was resolved with new actuators.”

“I would like to see the straw spread better especially when dealing with unfit, green crops, which we inevitably have to cut.

“Chop quality is fine but getting it flung across the full working width can be an issue.

“Ideally, I would like to be able to spread unchopped straw coming out the back of the machine across the full width.

“That would mean green crops would dry out that much quicker and could be raked up, baled and cleared in good time.

“With the material powered down into the stubble by the rotor it can sit wet for weeks.

“Blown out and sitting on top of the stubble it would dry out that much faster.”

Would you have another Axial Flow?

“Based on the 9230’s performance and reliability this year, yes – it could be a serious contender when we come to change again in two year’s time.

“I like the Axial Flow concept because of its simplicity – I don’t want to pay for things that complicate it and compromise reliability – I hope Case bears that in mind.

“But the real decision is based on the cost of ownership – as long as it remains sensible in that respect then it’ll be in with a good chance.”

What is its workload and how many hours has it done now?

Controls easy to use

“The land is mostly pretty level, apart from some sloping fields next to a river, so we don’t need a levelling system.”

“It went fine and there haven’t been any major dramas.

“However there has been a bit of an overheating problem this year – on long field the water temperature would gradually rise until it hit the 105C mark.”

“We’d then have to slow the forward speed to let the temperature go back down again.”

“It may have been that we were pushing it more this year.

Staff Nick and one staff member

“Despite cleaning out the radiator really thoroughly, we haven’t got to the bottom of it.

We’ll talk to the mechanic when it has its winter service and see what he thinks.

Other than that, there haven’t been any problems at all.”

Has it been reliable overall?

“Other than a couple of bearings two years ago, nothing major has really gone wrong.”

“We would like a bigger tank, of course. I know that Claas have fitted a Lexion-style open top on new Tucano models and it would be nice to have that on our.”

“One thing we can’t get to work properly is the 70% and 100% tank alarms – the 70% alarm goes off too early and so does the 100%, even though we have tried moving the sensors several times.

Would you have another Claas?

“Yes, we get pretty good service from the dealer and it’s mostly been reliable.

However we’re not looking to change it.

“We don’t need a wider header – the field entrances are tight already.

“We’ve put in a new grainstore this year, so that’s helped speed things up and the combine doesn’t have to wait for the tractors and trailers very often.”

Properly integrated GPS steering which can be swapped to other machine

HillMaster body levelling allows output to be maintained on banks

Fuel use could better – although no gas-guzzler

What’s its workload and how many hours has it done now?

“Having done four harvests, the S690i has now clocked up 1,107 engine hours. With 810ha of arable cropping to clear, that figure does not seem that high but it is backed up by a neighbour’s machine when the pressure starts to mount in catchy seasons.”

“Generally we’re pumping out an average of 50-60t/hour in wheat. Obviously spot rates climb much higher than that.

“It has no issue keeping going when the dew starts to set in – this harvest we’ve regularly kept going until 2am.

“I do notice a little more grain going over the back as the straw gets damper but I’m prepared to accept that if it means getting the crops cut when the weather is stacked against us.”

Two areas are felt to have been a particular improvement over the business’ previous S690 – the header and chopper.

“Initially I struggled with the 35ft header in picking up laid crops on undulating ground but now I’m used to it I’ve found it follows the ground so much better than before.

I & S Clarke, near Salisbury, Wiltshire

“And the chopper makes a consistently good job so long as the blades are kept sharp – we swap them round every winter.”

“For our first couple of seasons we had a recurring issue where the dog-clutch on the returns rethresher would kick out too readily as grain moisture climbed above 20% or green straw started coming through.

“Eventually it was sorted with a mod from Deere – a pin-and-cone clutch replaced it and we haven’t had an issue since.

“The only other problem was a slight leak on a seal between the main gearbox and the engine.

“When we noticed it we were able to top it up daily to keep going through harvest and then in the winter it was case of splitting the gearbox and motor.

“Other than that we haven’t had a major breakdown that has stopped us.

“That’s my main reason for having modern, up-to-date kit – we can’t afford to be parked up when the weather is in our favour.”

“Like any rotary machine, it could be easier on the straw.

“It does hammer it but this machine is so much better than my old S690 and the STS before that.

“We do bale a lot of our straw but it’s not the cash crop – getting the grain in is our priority so we’re prepared to live with smashed straw if it means we get decent output.

“My only other gripe is that it could be better on fuel – it’s no gas-guzzler but it feels like we fill up plenty often enough.”

“Without doubt – we get good back-up from our local dealer Hunts and the combine is a good performer.

“We like the way Deere integrates its GPS kit too.