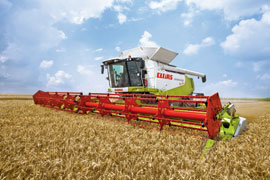 The threshing power of modern combine harvesters is formidable. Ever more efficient separation systems, driven by ever larger engines, produce outputs that most of us would never have believed possible only a decade ago.

Hand in hand with such impressive developments comes a need for a header that can provide sufficient volumes of crop to ensure the threshing system is always fully occupied.

The basic design and operation of headers, with their reciprocating knives, table augers and sails, has barely changed at all. And, until recently, extending the header generally just involved lengthening the components and the metalwork holding them all together.

But beyond 10.5m things get tricky as getting the drive to knives, augers and sails becomes a more challenging task and often involves taking the drive to both ends of the table. The structure gets more complicated and heavier.


A big combine can weigh 16t, with a header taking this up to 20t. Add in a full grain tank of 10t and you have a 30t machine rolling up and down the field. Most of this weight will be on the front wheels so the front axle loading could be as high as 20t and ground pressures, depending on tyres, above 15psi.

While the basic combine header design has changed little, there have been improvements to the flow of the crop on to the table.

Best known is Massey Ferguson’s PowerFlow system, which is available in widths up to 9.9m and uses a series of short longitudinal belts to move the cut crop evenly from knife to the auger. A similar system, made by German firm Zurn and sold in the UK by Zurn UK, has been available for Deere combines for some and can now be fitted to other makes.

Another key development has been to alter the distance between the table auger and the knife. Case IH has the VariCut and New Holland the Varifeed headers, which provide an extending floor to change the knife/auger distance and help crop flow, particularly for rape. Similar systems are available from Claas and John Deere with Deutz-Fahr offering a conveyor system.

When it comes to mega-working widths, Claas with its 12m (40ft) Vario cutterbar probably tops the league. Introduced last year, the V1200 has a split reel and auger supported on a central bearing, and a knife which is also in two parts. Drive for the knife is via two synchronised gear drives on either end of the header.

Even wider headers are being developed by the company with the extra weight offset (at least when the combine is in work) by having the header partially supported on wheels.

Recent years have seen specialist header makers trying to break into the UK market. Shelbourne Reynold’s stripper header has been very successful in other parts of the world, but has only gained a niche market in the UK.

More recently, it has been importing the Canadian built MacDon draper headers. This 10.5m D60 draper header uses two transverse conveyors to transfer the cut crop to the centre of the table where it is fed into the intake auger by a third conveyor working at right angles to the other two.

Conveyors are made from rubber skim-coated drapers and, for tracking, use a reversible v-guide and seal on the front edge. Tall crops such as oilseed rape are encouraged to keep moving on the conveyor by two small diameter augers positioned on the on the top edges of the rear wall.


The headers are due to undergo a second season’s testing this harvest. After that, the plan is for it to be fully available for UK growers. It can be fitted to all makes of combine and the current price of a 10.5m version is £56,469, while a 12m unit costs £59,650.

Another contender for a slice of the UK header market is the Austrian-built Biso header which made its debut appearance last season as a 12m wide unit coupled to a New Holland CR9090.


Called the Ultralight 800 and marketed by Abrey & Son, it uses a lot of aluminium to minimise weight. It is made up of 1.5m sections, which allows it to be built in 9m,10.5m and 12m widths. Biso is also reported to have a 16m version on test this year.

To help with crop flow, there is an extending cutting

table to alter the knife/auger distance by up to 80cm. A stainless steel auger is driven from both ends of the table as are the two knives which over lap in the middle using keepers with wider gaps.

The 12m Ultralight 800 header, complete with integral vertical side knives and its own hydraulic system, weighs in at just over 4t and has a list price of £76,200.